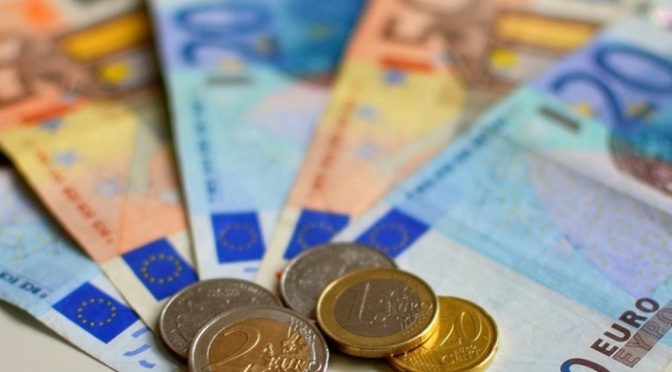 For the last four years, scores of mainstream financial experts are expounding on the merits of dropping “helicopter money” to augment the people’s purchasing power and reignite the collapsing debt-based economy.

However, the Federal Reserve, in all its wisdom, responded only with Quantitative Easing that directly bails out the vulture lenders/bankers which are now silently skimming on your hard earned deposits in the process known as bail-ins.
In deep contrast, the governments of the more progressive side of the Atlantic are instead contemplating on a more radical idea unlike the blatant robbery that their counterparts in the United States are doing.
The Europeans are now entertaining the idea of a fixed basic income on top of the usual pay from existing jobs, regular or contractual. Obviously, this is similar to the first proposal, i.e. helicopter money, but with prequalification and not universal. The priority should be those from the lower end of the income brackets.
Finland is planning to shell out $876 per month per adult to replace existing benefits. The existing monthly social security stipend is for them socially degrading. But the ultimate rationale is for the Finnish government to reduce the unemployment which is currently at 15-year high.
The bureaucrats believe that once the unemployed are receiving their guaranteed monthly income, they will be encouraged to take on more low-paying jobs. In other words, the State will be subsidizing both the currently unemployed and the small business enterprises.
A pilot test would be implemented in one Finnish town next year.
Switzerland will also be holding a referendum on this matter soon and many of the Dutch cities will be introducing basic income next year.
Before we begin shooting down this plan, we must understand that this scheme does have a good precedent, so they said.

“Previous experiments have shown that universal basic income can have a positive effect. Everyone in the Canadian town of Dauphin was given a stipend from 1974 to 1979, and though there was a drop in working hours, this was mainly because men spent more time in school and women took longer maternity leaves. Meanwhile, when thousands of unemployed people in Uganda were given unsupervised grants of twice their monthly income, working hours increased by 17% and earnings increased by 38%.”

One notable problem they are pointing out, however, is the cost of the actual distribution to as many as 4.9 million adults in Finland. This is not to mention that,

“Another serious consideration is that some people may be worse off under the plan. As a proposal hasn’t been published yet, it’s not yet known exactly who might lose out. But those who currently receive housing support or disability benefits could conceivably end up with less under national basic income, since the plan calls for scrapping existing benefits. And as national basic income would only give a monthly allowance to adults, a single mother of three could struggle to support herself compared to, for example, a neighbor with the same government support but no children and a part-time job.

Finally, this raises the question of whether it’s really fair to give a relatively better off individual the same amount of welfare as someone who’s truly struggling. Finland’s constitution insists that all citizens must be equal, though, of course, equality can be interpreted in many different ways. So far, there’s no definitive answer as to whether national basic income will create a more or less equal society.”

So, why have we these needless complications?
Is there really an absolute need for printing and distributing money so that we can all have access to our basic needs?
Remember, we are not the only living beings on this planet. But it is only the human species that are printing paper money and yet perennially struggling for survival.
We consider that as a product of our advanced thinking.
This is our fundamental difference from the people leading this damned forsaken planet, i.e.  those same people  who still have the gall to call themselves the Illuminati, or The Enlightened.
Certainly, these parasites didn’t start from the bottom just like we still are, or have even played the game honestly and fairly. They just claim everything for themselves by force and deceit, and to hell with everyone else.
We are still far from the transition phase described in the Venus Project. In fact, it’s very obvious that this “national basic income” program still falls within the parameters of the United Nations’ Agenda 2030.
We need to work even harder for the obsolete mindset to completely go away.

9 thoughts on “Europeans Getting Ready for National Basic Income”