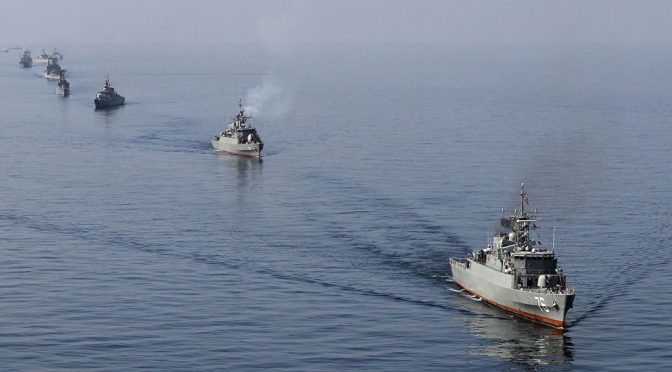 Iran does it again by sending away a Ticonderoga-class guided missile cruiser, USS Monterey, near the Strait of Hormuz. This is the nation’s second uncomfortable encounter with the US Navy in just 2 weeks, or so.

This recent event is preceded by the capture of 10 US frogmen allegedly drifting unintentionally into Iranian waters, although a different intelligence report surfaced later on suggesting a diplomatically devastating story.

“TEHRAN (FNA)- A US Navy warship on Wednesday morning received a serious warning from several Iranian destroyers to keep away from their drill zone near the Strait of Hormuz, an incident that can keep frictions high after Iran captured 10 US marines in the Persian Gulf earlier this month.
Iran is running major naval wargames in its waters in the Persian Gulf. The high-profile Velayat exercises by the Iranian Navy is an annual event and all shipping lines and Naval vessels in the region are informed of the area of the drills according to international maritime and naval standards that require all foreign ships and vessels to keep some 5 nautical miles away from the wargames zone.
The USS MONTEREY (CG 61), a TICONDEROGA class cruiser, was sailing near the Strait of Hormuz where the Iranian forces were staging the main phase of the Velayat 94 massive wargames along the country’s Southeastern Makran seashores on the rims of the Persian Gulf on Wednesday.

According to the Iranian Army, the US warship left the region immediately after receiving the warning.
Iran’s Navy Commander Rear Admiral Habibollah Sayari said the warship seemed to be planning to spy on Iranian vessels and weapons.
“Some still seem to be holding no belief in Iran’s naval power; hence they attempt to come close to get informed of our moves and capabilities,” the Admiral said on Wednesday.
The incident was the second naval showdown between the United States and Iran in Persian Gulf waters in just two weeks.
On January 12, nine men and one woman from the US Navy strayed into the Iranian territorial waters near the Farsi Island in the Persian Gulf. They were immediately captured by the Islamic Revolution Guards Corps (IRGC).
Their boats were equipped with 50mm caliber machine guns and other light and semi-heavy weapons. Many regional analysts have also praised the IRGC’s brave reaction to the US aggression.
The IRGC freed the 10 a day later and after it was proved that the US marines had strayed into Iranian waters only due to the failure of their navigation devices and equipment.”
http://en.farsnews.com/newstext.aspx?nn=13941107000905