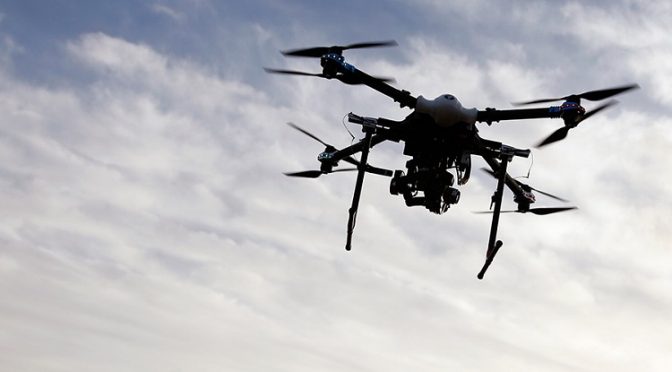 This could be how the Iranians saw the transport of one high ranking ISIS commander that resulted to the apprehension of 10 US frogmen.

Obviously, both White House and Pentagon hierarchy would dismiss this outright but no one can deny the fact about the Iranians’ ability to render any US aircraft a sitting duck. This drone overflight will further underscore that fact.
Interestingly, the spokesman for the US Navy’s 5th Fleet based in Bahrain Kevin Stephens’ own confirmation is also very revealing,

“While questioning Iran’s drone footage, Stephens confirmed that an Iranian drone flew “directly over” the USS Harry S. Truman on January 12 in international waters and near the French aircraft carrier Charles de Gaulle.”

Again, such statement would certainly reinforce the devastating details surrounding the detention of 10 US frogmen and missile firing on USS Truman by the Iranians.

Iran says one of its drones has taken “precise” photographs of a US aircraft carrier in Persian Gulf, IRNA news agency reported. The incident occurred during the third day of Iran’s naval drills.
The video, reportedly showing a US naval ship with aircraft on board, was broadcast on Iranian TV. The footage showed the drone launch and later fly over of what appeared to be an aircraft carrier. It also revealed a row of fighter jets on the carrier’s deck, according to AP. Iran did not specify the name of the ship and no identification marks were shown in the video.

In another report, IRNA news agency said that an Iranian light submarine also took part in the operation.
“Iran has several submarines underway for its current exercise,” a spokesman for the US Navy’s 5th Fleet based in Bahrain, Kevin Stephens, said, refusing to give any more details.
US officials remained skeptical of the footage.
The officials were “not in a position to verify the authenticity of the video as there are countless examples of similar footage to be found on the internet,” Stephens said.

“I can say that we are confident in the ability of US naval forces operating in the region to respond appropriately as the situation dictates, and will exercise our right to defend our forces against any threat,” he said.
While questioning Iran’s drone footage, Stephens confirmed that an Iranian drone flew “directly over” the USS Harry S. Truman on January 12 in international waters and near the French aircraft carrier Charles de Gaulle.
The nuclear-powered carrier is currently in the Gulf region taking part in the anti-terror operation against Islamic State.
Admiral Habibollah Sayyari, the commander of Iran’s navy, said that the drone flight was “a sign of bravery.”
It “allowed our men to go so close to the warship and shoot such a beautiful and accurate footage of the combat units of the foreign forces,” he told state television.
The past month saw a series of naval incidents between Iran and the US in the greater Persian Gulf.
Earlier this week, Tehran warned a US warship to leave the Strait of Hormuz, where Iran’s military was carrying out a massive naval drill and testing its submarines, destroyers and coastal missile batteries. Upon receiving the warning the US ship promptly left the area.
Sayyari told Tasnim news agency the US ship was trying to get information on the strategic area to the Strait, a vital oil and gas shipping route.
“It was predictable that the U.S. warship would approach the area to collect information on (our) military operations. So we warned them twice in the morning… to keep their distance from the exercise area and keep clear of our missile range for their own safety,” Sayyari said.
The incident comes less than a month after Iran detained 10 US sailors in the Persian Gulf, who were released without any charges two days after their capture.
The two US vessels armed with machine guns were on their way from Kuwait to the US naval base in Bahrain when they experienced mechanical problems and drifted into Iranian waters, according to the Pentagon. The incident occurred near Farsi Island, where the Iranian Revolutionary Guard Corps has a naval base.

Last month Iran test fired several rockets near three Western warships, including the Truman, sparking concerns in the US military. American military officials described the act as “highly provocative.”
In 2011, Iran captured a US reconnaissance drone, saying it violated the country’s airspace as it was detected flying 225 kilometers (140 miles) from the border with Afghanistan. Later it revealed a copy of the captured drone.
On January 17, world powers lifted the sanctions on Iran in exchange for its agreement to curtail the nuclear program.
https://www.rt.com/news/330653-iran-drone-us-ship/
When US drone flew over Iranian territory a few years ago, it was captured fully intact. We would have expected the US to at least return the favor, but the capability may be lacking.

2 thoughts on “Iranian Drone Flew Over US Aircraft Carrier Undetected”