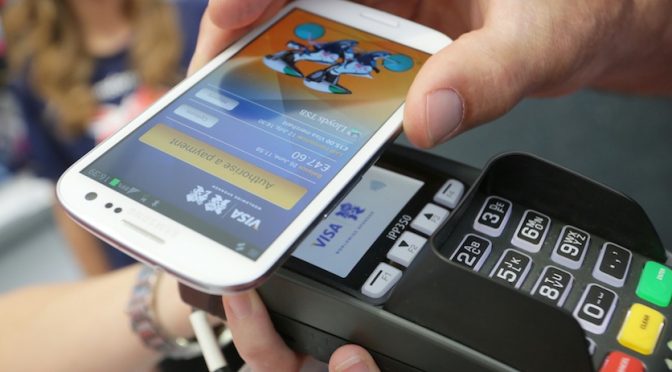 There is now a growing body of evidence that the move towards a cashless society is still on track. In fact, with the ongoing fall of the Khazarian Empire, it might be its only option to remain in power in the West.

“Cash won’t be around in a decade, the chief executive of one of Europe’s biggest banks predicted on Wednesday.

““Cash I think in ten years time probably won’t (exist). There is no need for it, it is terribly inefficient and expensive,” John Cryan, chief executive of Deutsche Bank, said during a discussion on financial technology, known as “fintech”.”

From Corbett Report, here’s a list of countries that are already moving, or studying a departure, towards cashless transactions.

The War on Cash: A Country by Country Guide

Mexico:
In 2013 Mexico a ban took effect in which cash payments of more than 200,000 pesos were made illegal.

https://www.corbettreport.com/the-war-on-cash-a-country-by-country-guide/#comment-28815
Since 2014, in Belgium it’s illegal to pay cash for fixed assets. And for movable property (except for 2nd hand products) you are restricted to 3000euro.
http://www.mensenrecht.be/nieuws/cashbetalingen-zijn-strafbaar
In the Netherlands i don’t think there are any restriction laws for consumers (yet), except at the border, but they do ‘force’ it through business legislation.
For instance, the price for business owners to deposit cash money to their accounts has (in some cases) gone up 40%. And this was back in 2011! Some banks (SNS) don’t even accept their cash money anymore.
http://www.detailhandel.nl/nieuwsExtern/482/Contant%20geld%20voor%20winkeliers%20te%20duur
So next to all the positive propaganda (security, time, costs, etc.) about the new ways of paying electronically (even mayors who give up their cash money for a week:

And to complete the circle urge banks to give people who only pay electronically a discount on their bankaccount costs. So to give the consumer another incentive to drop cash.
Back in 2010 the consumers‘ association (consumenten bond) said that in 5 years all cash will dissapear.
Well, it’s not going that fast but we’re moving pretty rapidly.

10% increase of switchcard paying. Increase in contactless (smartphone/watch) paying, 135m purchases. 23% increase in paying with iDEAL.
And (a little off topic) in august 2015 the Netherlands was the first country to test paying online with fingerprint/facial recognition.

https://www.corbettreport.com/the-war-on-cash-a-country-by-country-guide/#comment-28862
It is being promoted as a way to pay bills without standing in long queues. Not sure how many people have taken it up but there was a big campaign to teach people how to use it.
https://www.corbettreport.com/the-war-on-cash-a-country-by-country-guide/#comment-28863
Here’s a 2014 CNN infographic on the “Evolution of the Cashless Society”… 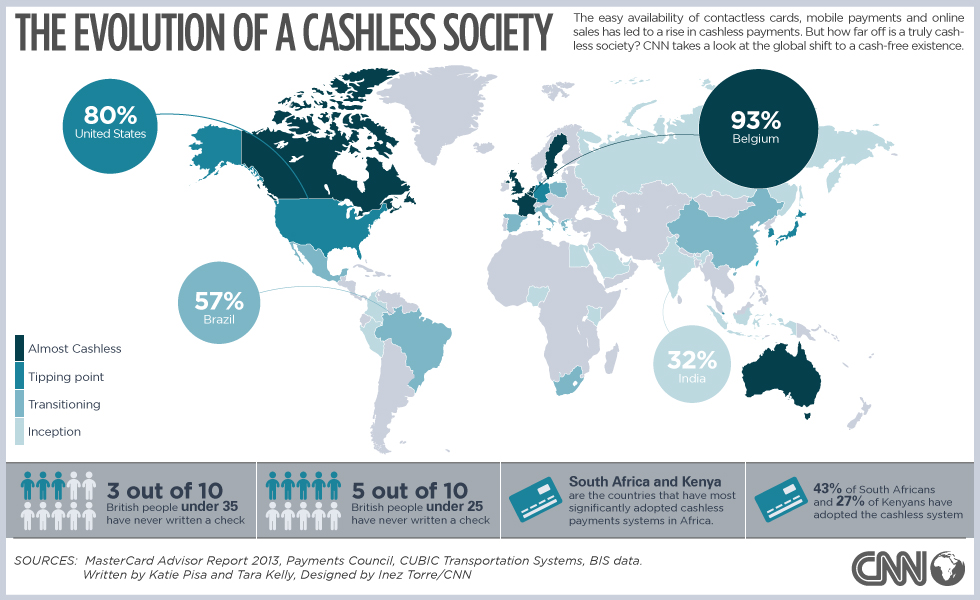 Editor’s note: This infographic is part of CNN’s “Future Finance,” a new series showcasing future trends related to the global financial system. The show complements CNN’s business coverage by examining everything from a cashless society to high-speed trading that employs the power of laser beams. Viewing this from mobile? Click here. Watch the video to find out more about cashless society. (CNN) — CNN.com
Analysis
It’s not a complete surprise for us here in the Philippines to be on the above list even if we are part of the ASEAN Community and AIIB economic spheres. But, as we have said much earlier, the Philippine government has been licking American asses since 1898 and Imperial Manila has become so very good at it that nothing America would do that is considered detrimental, or offensive, to the nation.
Our only redeeming opportunity is that, for the last few months, it is the people at the grassroot level that are now campaigning for a hesitant presidential candidate whom they sincerely believe represents their interest based on his 20-year track record that made what Davao City is today, and for all his rhetoric, e.g. he caused a nationwide stir when he publicly cussed the Pope with “Putang Ina” [Motherfucker] after being caught in a heavy traffic caused by the latter’s visit to Manila.
But for Russia and China, two countries that are the prime movers behind the BRICS offensive against the Khazarian Mafia, to be on the above list should give some credence to the concerns raised by the Corbett Report that the world is still marching towards the direction of the New World Order.
There’s no denying that cashless transaction is very convenient and transparent. But transparent for whose vantage point?
Financial automation do have its multiple merits but when the whole system is controlled by a totalitarian entity, then that only makes the whole control process even more efficient.
In the leaked document, “Silent Weapons for Quite Wars,” financial engineering has been serving the Khazarian Mafia its good fortunes for decades while keeping the masses totally oblivious of their slavery. The full automation of this machinery will cause a quantum leap for totalitarian control.
This is the foundation of the Technocratic Dictatorship where all aspects of human survival are effectively tied into the machines. Those who control the machines will always have the upperhand.
This is the reason why those groups of personalities with dictatorial tendencies must be removed first from power before full automation on the entire economy is to be laid out. But then again, what would prevent them from coming back once the whole automated infrastructure is already in place?
They could also simulate their own defeat, say through the BRICS Initiative, only to come back later on. After all we did see Xi Jinping being accommodated at the Buckingham Palace, while Putin was berated at the Vatican Palace by Pope Bergoglio himself, months before Xi’s UK state visit. 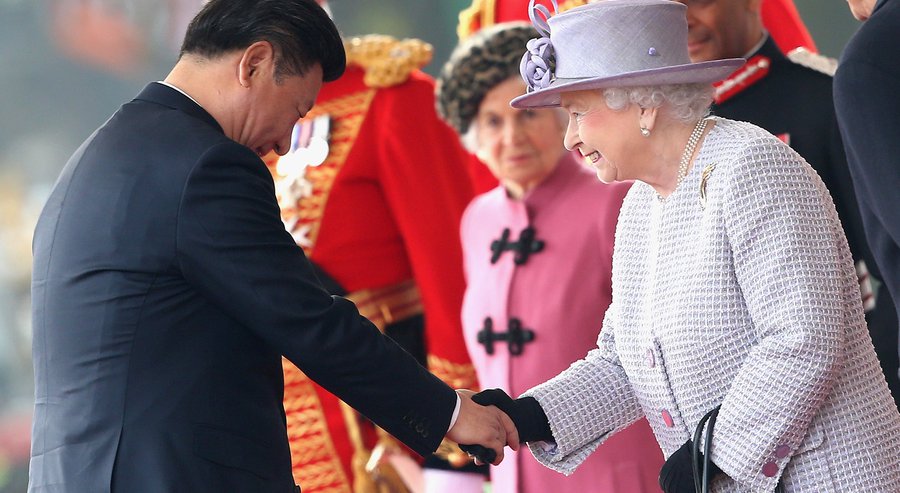 This is the reason why we are not buying into the argument that the Khazarian Empire leadership must never be horizontalized outright.
So, when everybody is already hooked up to the machine, because not doing so would make a financial outcast out of them, what would stop the exceptionalists from switching your cashless account off to disable your capacity to live as a way of enforcing State obedience?
By then, the only valid alternative is to depart from the whole mechanism of State control and live off-grid in the countryside. To put it simply, one way of winning this game is via non-participation. But how many of us can afford to live as an outcast?
Another aspect of a cashless society, which is completely ignored by all States listed above, is with a complete departure from any of the prevailing financial systems, i.e. the resource-based economy as advocated through The Venus Project.
The idea of a resource-based economy [RBE] necessitates the complete removal of State controls on most resources through money in favor of their sustainable utilization where planned obsolescence is anathema and the endless pursuit of higher quality of life fully attuned to Nature is cardinal.
In fact, RBE is a complete transformation of the State itself from being a mechanism of control by the few, through representative governance, to one that serves only as a platform for direct popular cooperation. The closest analogy is the Open Source Community where only the best solution dominates naturally through its own merit, and with majority’s consent in real time.
No matter the justification, any form of control against the many in the hands of the few will always be viewed as antagonistic.
Humanity has reached that stage when protests are not just a mere expression of popular discontent, but evidence that the majority are profoundly aware that there is something better than the present.
Multiple groups are now trying to wrestle global control from the Khazarian Mafia. Ben Fulford has said much earlier that the New World Order that the group he represents is particularly trying to put in place is not something as one-sided against the people as the present, but should be in the direction of a Star Trek atmosphere, so to speak.
Similarly, another segment of the Third Force is that one represented by the Keenan Group who committed themselves to releasing free energy, among other exotic technologies.
Whatever the case may be, It is very evident that in the interim a multipolar world is developing and it will be divided along two contrasting capitalist economic boundaries, i.e. Western unregulated capitalism based on fiat electronic currencies, and the BRICS regulated capitalism anchored in a basket of asset-based sovereign currencies. This will be so because of two contrasting philosophies, i.e. Western fascistic exceptionalism and Eastern “win-win” Confusian philosophy.
Unfortunately, the Exceptionalist Doctrine excludes the goyims of the West. This is the reason why even Germany’s Schiller Institute behind the idea of a Eurasian Land Bridge is urging fellow Europeans to march with the BRICS through the New Silk Road revival.

It is definitely high time for us to stand for our own convictions of what the future should be, by assuming more responsibilities to become truly self-reliant and independent, rather than the convenience of just following legislated commands.
Together, we hold the ultimate key to our freedom.

7 thoughts on “Who would actually benefit from a Cashless Society?”