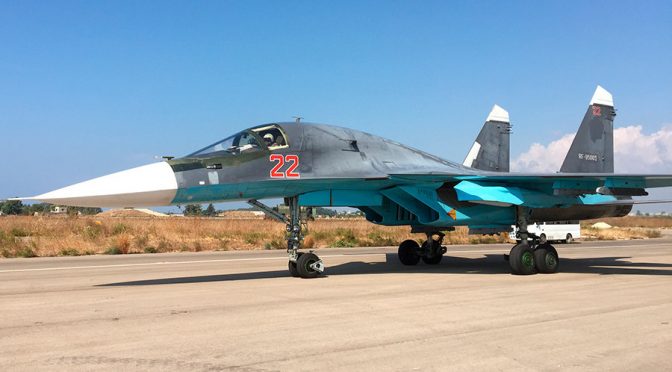 For every Turkish unfriendly action, Russia is always ready to respond in kind.

Turkey has claimed, in recent days, that another Russian fighter violated its airspace and as usual the US White House confirmed the intrusion further annoying the Russians. So, in response to Turkish propaganda, Russia decided to redeploy its 4th generation Sukhoi fighters into Syria.

“NATO’s refusal to provide proof of Russia’s alleged violation of Turkish airspace by claiming it is “classified” shows that Turkey and its allies are trying to hide the truth from the media, the Russian Defense Ministry said on Monday.

“It is no coincidence that Turkey, after its loud outbursts towards Russia, is so persistent in involving NATO in this murky story. It’s absolutely clear to us that the information has been ‘classified’ not from us, but from the public and media, particularly those from Western countries and the US, which have been manipulated by their Turkish partners,” Russian Defense Ministry spokesman Major General Igor Konashenkov said.”

The SU35 is the most advanced fighter in Russia’s aerospace command.  Like the four SU30 fighters already present at Khmeinim, the single seater SU35 has super-maneuverability. It also has superior radar and electronics to the SU30.
This is Russia’s way of telling Erdogan not to order the firing at their warplanes ever again, or he will be shamed with a disproportionately destructive dogfight.

MOSCOW, February 1. /TASS/. Russia’s advanced Sukhoi Su-35S fighter jets started accomplishing combat missions in Syria last week, Russian Defense Ministry spokesman Igor Konashenkov said on Monday.
Some media outlets earlier reported about the redeployment of these fighter jets to Syria.
“Starting from last week, super-maneuverable Su-35S fighter jets started performing combat missions at Khmeimim airbase,” the spokesman said.
Previously, Khmeimim had only modernized Su-25 fighter bombers, Su-24M bombers, Su-34 jets and Su-30SM fighter jects providing cover for these planes. An S-400 long-range missile defense system was deployed at the base in late November. Apart from that, the Varyag guided missile cruiser equipped with the Fort system (a sea-based analogue to the S-300 missile system) is providing air defense of the base.
Su-35S fighter jets were deployed to Syria after Ankara had once again accused the Russian military of alleged violation of Turkey’s airspace. On January 30, Turkey’s Foreign Ministry claimed that a Russian Su-34 fighter jet had violated the country’s airspace on January 29. Russia’s Defense Ministry dismissed Turkey’s claims as “unsubstantiated propaganda.”
Russia tightened security measured in Syria after a Turkish fighter jet downed a Russian Su-24M jet in late November 2015 having accused it of alleged violation of Turkey’s airspace. Moscow said the Russian warplane had been downed deliberately whereas a Turkish plane had committed border violation.
Russia’s warplanes attacked over 1,350 terrorist targets in Syria over week
According to the spokesman, the warplanes of the Russian air grouping in Syria have attacked more than 1,350 terrorist objectives in Syria over the past week.
“Over the past week, Russian warplanes have flown 468 sorties in the Syrian Arab Republic, including 24 sorties performed from the Russian territory by Tu-22M3 long-range bombers,” the spokesman said.
The Russian warplanes attacked 1,354 terrorist facilities in the Syrian provinces of Aleppo, Latakia, Hama, Homs, Damascus, Raqqa, Daraa and Deir-ez-Zor, the spokesman said.
Russian bombers disrupt militants’ attempt to storm Deir ez-Zor
The military official also said that Russia’s Tupolev Tu-22M3 long-range bombers disrupted militants’ attempt to storm the besieged city of Deir ez-Zor.
Earlier, General Konashenkov said Tupolev-22M3 bombers and planes operating from Hmeimim in Syria destroyed 23 major terrorist targets in the area of the city.
“The terrorists’ attempt to storm Deir ez-Zor was upset,” Konashenkov said.
Russian warplanes foil attempt of counterattack on Syrian government troops
Konashenkov also noted that the Aerospace Force air grouping planes have foiled an attempt by terrorists to counter-attack Syrian government troops, destroying 17 Jeeps with large-caliber arms and more than 50 gunmen.
He said terrorist artillery positions were hit in the area of Khirbet-Khanan in Hama Governorate, as a result of which seven guns and a truck bringing ammunition were destroyed.
The general said field commanders of gunmen had made an attempt to regroup forces in the area of Khirbat el-Ghazala city, Daraa Governorate, with an aim to prepare a counter-attack on government troops with the use of vehicles equipped with large-caliber weapons.
Russian planes in Syria wipe out terrorists’ fuel tank farm, refinery
According to the spokesman, Russia’s air group has wiped out a fuel tank farm of the Jaish al-Islam group in Syria’s Damascus province and terrorists’ small oil refinery in Raqqa.
“A Sukhoi-24M bomber hit a fuel tank farm of the Jaish al-Islam group near Jabal Batra, Damascus Province. The direct strike eliminated the facility,” Konashenkov said.
In a separate strike a mini-refinery near Rujm Amalah, Raqqa province, was wiped out, he added.
Fuel and ammunition depots belonging to the IS terrorist group were also destroyed in the Aleppo province.
“A Su-24M bomber destroyed ISIS [the former name for the Islamic State group banned in Russia] fuel and ammunition depots near Jubb Ghabsha, the Aleppo province,” Konashenkov said.
In addition to that, a militant stronghold was destroyed in the Homs province. “Objective control means have confirmed the destruction of two vehicles with large-caliber machine-guns and more than 10 terrorists,” the Russian Defense Ministry spokesperson said.
Field camp training terrorists from CIS destroyed
Russian aviation has also destroyed a field camp in Syria where militants from CIS (Commonwealth of Independent States) were trained, more than 20 terrorists were killed.
Konashenkov said information about the field camp near the settlement of Kinsibba was provided by representatives of the Syrian opposition. Among militants in the camp were citizens of CIS countries who arrived from the territory of Turkey.
“After conducting additional reconnaissance by drones, Russian fighter jet Su-24M was used to strike the target. As a result of the airstrike, the field camp and more than 20 militants were destroyed,” he added.
http://tass.ru/en/defense/853613