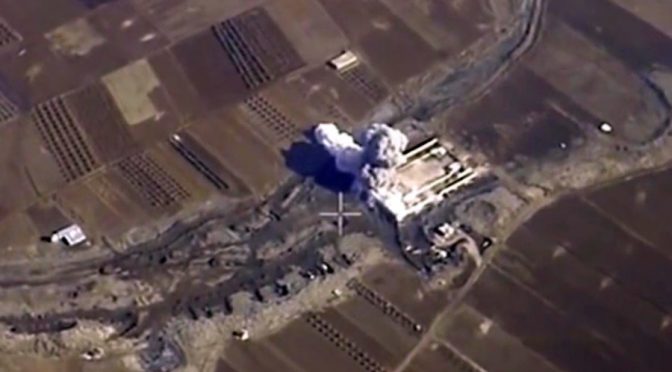 In another sign of exceptionalism, nay desperation, a TV station in France broadcasted a ridiculous “US airstrikes against ISIS” story supported with actual Russian airstrike footage against ISIS in Syria.

What’s appalling about all of these is that, the mainstream media were accusing the Russians of incompetence for allegedly hitting civilian targets while praising US airstrikes as far more accurate, i.e. using Russian videos.

Below is the original video of an airstrike on a training base of the Jabhat al-Nusra militants (Aleppo province):

This is not the first time that the entire NATO propaganda, i.e. mainstream media, plagiarized evidence of Russian accomplishments in Syria. It should not be a surprise to anyone when the war in Syria is finally over, that NATO would declare its victory against terror around the world. After all, they need to provide a good ending to their own hallucinations.

“The French state television France 2 has shown a news report criticizing Moscow’s anti-terror campaign in Syria, but used images of Russian airstrikes not to talk about Moscow’s efforts, but to illustrate achievements of the US-led coalition instead.
According to RT in French, the report showing the videos released by Russian Defense Ministry, while the French reporter was talking about US airstrikes, was aired on February 4.
The French report on anti-terrorist operations in Syria and its Aleppo province first featured a short story strongly criticizing airstrikes carried out by the Russian Air Force in the region. The journalist then proceeded to tell the audience about the objectives of the “minimum civilian casualties” western operation, led by the United States.
“The planes of the US coalition have a hard time finding targets to destroy,” the reporter was saying, while images of the Russian airstrikes were broadcast.
Having just praised the accuracy of US airstrikes, the reporter pointed to the video on screen, which showed the footage of Moscow’s anti-terror op, released by the Russian Ministry of Defense.
Commenting how “targets are very difficult to find” and telling the audience how the US and its allies have been destroying terrorist training camps, command centers, ammunition depots and oil facilities, the French channel kept showing Russian footage of its efforts in Syria.
READ MORE: Bombing plagiarism? Russia says Western media use its Syria footage in coverage of US-led coalition
This is not the first time videos from Russia’s anti-terror campaign in the Middle East have been used by western media to depict airstrikes by the US-led coalition.
https://www.rt.com/news/331929-russian-video-french-report/