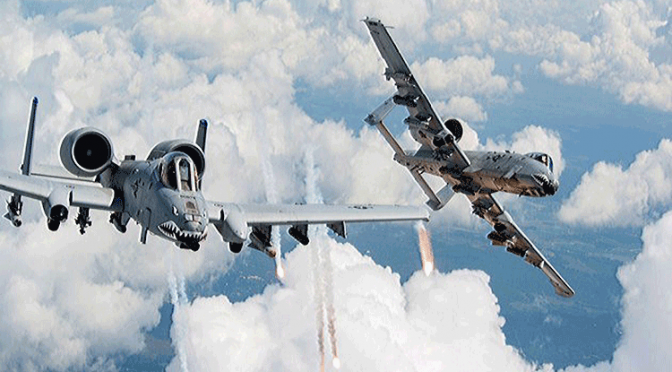 Previously, NATO propaganda machinery were using Russian air sorties videos while claiming advances in Syria. Now, they are actually launching some actual strikes of their own using old attack planes targeting civilians trapped inside Aleppo and then blame Russia for the incident.

It is anticipated that whoever wins in Aleppo will come out the victors in the Syrian theater that is one major part of the whole covert WW3.
These dirty tactics are just another of those brainless provocations to salvage what’s been left of their imagined exceptionality. After all, the coalition behind Daesh Terror is left without any other options than to mess around, sour losers they all are.

MUNICH — For months now the United States has insisted there can be no military solution to the Syrian civil war, only a political accord between President Bashar al-Assad and the fractured, divided opposition groups that have been trying to topple him.
But after days of intense bombing that could soon put the critical city of Aleppo back into the hands of Mr. Assad’s forces, the Russians may be proving the United States wrong. There may be a military solution, one senior American official conceded Wednesday, “just not our solution,” but that of President Vladimir V. Putin of Russia.
… While the official position of the United States remains that Mr. Assad must leave office, Mr. Kerry and his aides will not say when he must leave…
As a result, it is hard to discern now what kind of end for Syria is now envisioned by the administration… A fractured nation — part Alawite, part Sunni, part Kurd — is often discussed, but never officially.
Mr. Kerry is turning to the more immediate questions of cease-fire and humanitarian access. That did not impress Abu Youssef, whose farm in Aleppo Province has been hosting dozens of Syrians displaced by the recent fighting nearby. He asked to be identified only by a nickname for his safety.
“Yes, they will have a cease-fire, but after Aleppo it is finished,” he said in an online chat. “They will close off all of Aleppo, destroy the whole area, and then the Russians will negotiate a cease-fire,” he added. “After winning victory they will negotiate.”
http://www.nytimes.com/2016/02/11/world/middleeast/russian-intervention-in-syrian-war-has-sharply-reduced-us-options.html?_r=0
That is evidence that there are at least two US factions working inside the US government, i.e. one is critically cooperating with Russia and the other one is trying to sabotage the whole show.

Two US Air Force A-10 warplanes carried out airstrikes on Aleppo Wednesday, destroying nine facilities, Russia’s Defense Ministry reported. The same day, the Pentagon accused Moscow of bombing two hospitals, despite no Russian flights over the city.
“Yesterday, at 13:55 Moscow time (10:55 GMT), two American A-10 assault aircraft entered Syrian airspace from Turkey, flew right to the city of Aleppo and bombed targets there,” Russian Defense Ministry spokesman Igor Konashenkov said Thursday.
Also on Wednesday, Konashenkov referenced, the Pentagon’s spokesman, Colonel Steven Warren claimed that Russian warplanes allegedly bombed two hospitals in Aleppo.
“In his words, some 50,000 Syrian have been allegedly deprived of vital services,” Konashenkov said, pointing out that Warren forgot to mention either hospitals’ coordinates, or the time of the airstrikes, or sources of information. “Absolutely nothing.”
“No Russian warplanes carried out airstrikes in Aleppo city area yesterday. The nearest target engaged was over 20km away from the city,” Konashenkov stressed, adding that on the contrary, airplanes from the US-led anti-ISIS coalition were active over Aleppo, “both aircrafts and UAVs.”
“I’m going to be honest with you: we did not have enough time to clarify what exactly those nine objects bombed out by US planes in Aleppo yesterday were,” Konashenkov said. “We will look more carefully.”

However, a senior State Department official denied the allegations, saying that Russian reports are “false,” and that the US did not carry out any missions over Aleppo on Wednesday or Thursday, NBC reports.
On Wednesday, the US accused the Russian Air Force of targeting two hospitals in Aleppo.
“The situation in and around Aleppo has become, in our view, increasingly dire,” Col. Steve Warren, Operation Inherent Resolve spokesman, said Wednesday. “With the destruction of the two main hospitals in Aleppo by Russian and regime attacks, over 50,000 Syrians are now without any access to live-saving assistance.”
Warren added, “There’s little or no ISIL in the Aleppo area, so they’re kind of, at this point, separate fights.”
The spokesman for the Russian Defense Ministry drew attention to the stunning similarity of the situation with the American airstrike on the Medecins Sans Frontieres hospital in Kunduz, Afghanistan, and the US bombing of the positions of the Iraqi army in Fallujah.
“What they do first is make unfounded accusations against us – to deflect blame away from themselves. If it goes on like this, we’re going to make two media briefings: one for ourselves, another for those coalition guys,” Konashenkov said.

Pentagon: US strike that killed Iraqi soldiers could be 'mistake' by both sides https://t.co/GwOOP4qF61 pic.twitter.com/2QGKWpIftv

US friendly fire… with friends like that who needs enemies? (Op-Edge) https://t.co/IwYovmNu0Y pic.twitter.com/gDenSyl6lD

Western countries never bothered to share intelligence on terrorists in Syria with Moscow, although they did accept Russian maps with terrorists’ positions marked, the Russian MoD’s spokesman said.
“Now they criticize us, saying we fly wrong way and bomb wrong places. Should we send them more maps?” Konashenkov questioned.
He recalled what the Russian Defense Ministry had pointed out earlier – the more terrorists Russia destroys the more it is being accused of indiscriminate airstrikes.
“If you look at how Western media presents information, it looks like the cities not controlled by the Syrian government are full of peaceful opposition and human rights activists,” the spokesman said.
The Russian Defense Ministry and its partners in Syria operate multilevel intelligence, maintaining unimpeachable target spotting, the MoD representative said, adding that all airstrikes are delivered only after repeated verification of a target to avoid civilian casualties. Konashenkov said intelligence also comes from the armed units of the Syrian opposition.
Konashenkov accused Western TV channels of presenting the ruins of the city of Aleppo, devastated long before the Russian Air Force was deployed to Syria, as the results of recent Russian airstrikes.
“An experienced orchestrator has a finger in this pie,” the spokesman said. “The obvious trend is to trumpet about alleged Russia sins and be silent about the ‘effectiveness’ of the US-led anti-ISIS coalition in Syria.”

The Russian Air Force has performed over 500 sorties, eliminating nearly 1,900 terrorist facilities in Syria between February 4 and February 11. The Defense Ministry reports that two senior terrorist field commanders have been killed.
“Over the past week, February 4-11, the planes of Russia’s aviation group in Syria made 510 sorties during which 1,888 facilities of terrorists were destroyed in the provinces of Aleppo, Latakia, Hama, Deir ez-Zor, Daraa, Homs, Al-Hasakah and Raqqah,” Konashenkov said.

The MoD spokesman shared with the media about wholesale desertion among the terrorists in Aleppo. The jihadists intimidate local civilians and force them to walk en masse towards the Turkish border, while the militants try to melt into the crowd.
“They know for sure that neither the Russian Air Force nor the Syrian government troops ever deliver strikes on non-combatants,” Konashenkov said.
Elaborating on some details of the latest Russian airstrikes in Syria, he related how Sukhoi Su-25 ground-support fighters eliminated three terrorist convoys on the highway connecting Homs and Al-Qaryatayn. A reconnaissance check revealed that airstrikes destroyed nine trucks loaded with munitions, two armored vehicles and over 40 jihadists.
In Daraa province, a Sukhoi Su-34 bomber wiped out a hardened terrorist position near Ghariyah settlement. The strike that destroyed the fortified strong point also eliminated two armored vehicles parked nearby.
https://www.rt.com/news/332109-russian-jets-isis-warlords/