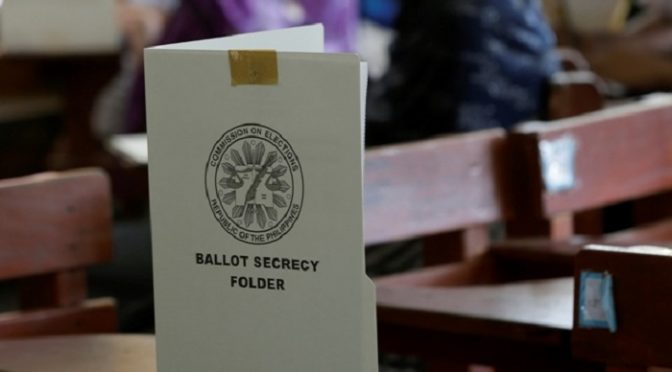 Just like in the United States and other countries, people in the Philippines will also be choosing who will occupy the highest office this year, specifically for this country, on May 9, 2016.

February 12, 2016
The official campaign period is on, and already signs of which candidate has the edge over others is becoming clearer.
The Duterte Presidential Campaign is uniquely powered by the people from all walks of life. Everybody is answering the call of the hesitant presidential candidate to make their own campaign materials, for lack of funds.
This is the humble house of Mayor Rodrigo Duterte, who for the last 22 years as mayor in Davao City, did not dip his hands in the cookie jar.

From the grassroots to the middle class, OFWs to the business community, even foreign entities are endorsing the mayor from Davao City, the largest city in terms of land area. They are printing their own campaign materials, producing their videos, and are calling everyone to support him.
Even journalists from the mainstream media are expressing their covert support by interviewing and giving him more airtime than the rest of the candidates.
Celebrities, too, are making their own video endorsements and some groups of artists are even composing songs compelling him to run, all at no cost to the mayor.
This is the first time that a groundswell of support of this magnitude has ever been seen in the entire history of Philippine elections.

Worse than the mouth of a Donald Trump, this guy has the ideologue of the late Hugo Chavez and is using the methods of Muammar al-Gaddafi, and the frustrated population just love him.

He promised to shut down congress if the legislative branch is not going to cooperate with him in the planned radical changes which include the following:

In deep contrast, the PNoy administration and Liberal Party candidate is at the bottom of the dirt, especially in Tacloban City where the worst hurricane in history, Typhoon Haiyan, inflicted the most casualties and exactly where Roxas leadership incapacity was uncovered.

No wonder, some Liberal Party stalwarts were leaving the party early on…

Manuel Roxas and all other candidates did not show up during the first nationally broadcasted presidential debate. The last man standing was Duterte.

This the Philippine Revolution that the 1% and the druglords in government are trying to avoid. If this revolution will be stolen, like Gen. Ramos did in 1992, the fight will surely go beyond the ballot.
With regards to the impending return of United States military bases across the archipelago, Duterte is still mum about it. But we anticipate that there will be a moratorium on the EDCA agreement considering his open admission of being a leftist.
[polldaddy poll=”9122481″] [polldaddy poll=”9122553″] October 12, 2015
Some of the early hopefuls were incumbent Vice-President Jejomar Binay, ex-local government secretary Mar Roxas. While Binay has enjoyed the highest numbers in earlier surveys, those numbers have dwindled ever since allegations of corruptions are brought to light.

Mar Roxas’s popularity submerged, too, by his failure to act decisively to the 2013 Typhoon Yolanda which resulted to thousands of dead bodies rotting in the streets of Tacloban City for days after the disaster struck.

https://www.youtube.com/watch?v=GsOOSejtJ9U
This highly condemnable incident has put to question about his true capability to solve the pressing problems of government inefficiency, graft and corruption, and poverty in the country.
Lately, Sen. Grace Poe has also filed her candidacy together with Sen. Chiz Escudero. She chose the UP Bahay ng Alumni as the venue to declare her candidacy.

It’s one thing to say all the things the people wanted to hear, but it’s another when you can really provide the critical details of how to get there and get things done. So far, we haven’t seen any details yet.

Poe’s handicap is her lack of experience in real life local governance. For the last three years, we haven’t seen any extraordinary display of leadership qualities expected from a good and capable leader. However, like the support they have extended to the late naiveté Cory Aquino, the Vatican agents of this country may go for her for being easily “steerable” through “policy advisers” just like the incumbent.
https://youtu.be/kCtnIXwv6ZU
Already, the Oligarchy has thrown its support to the highly “steerable” Poe:

“Be that as it may, a lot of businessmen, particularly those belonging to Makati business groups are very supportive of the senator, and some of them have been giving her a lot of advice on the economy and related matters. We’re also told some current Cabinet Secretaries (who are doing well in their jobs) may also be retained in the event Grace Poe turns out to be the winner.” read more

On his Kumpare Jejomar Binay:

“Poe has already established a reputation as a trapo, someone who favors the favored rather than the nation’s well being. Her silence on the Binay corruption scandal illustrates this. Would she pardon VP Binay if he were to end up in jail? He is the godfather of her child, after all. Once mistrust is lodged, it is difficult to remove. Mistrust is lodged and that particular drum will beat loudly during the whole campaign period.” read more

Frankly, we could not imagine a gentle Grace Poe talking to the Muslim separatist groups in Mindanao, the Communist NPA by herself and command respect during future negotiations because that BBL, revised or not, is not happening yet. Malalim ang ugat ng problema sa labas ng Metro Manila, e.g. insurgency, which may require non-standard approach.

The true extent of corruptions in government has been highlighted by the PDAF Scandal that tainted the reputation, assuming they have it in the first place, of every political party now in power. More than ever, the country is clamoring for a leader of proven political will and has displayed capability to solve practical problems with practical solutions.

A persistent bandwagon is building up for more than a year for the mayor of the largest booming city in the Philippines to run for the presidency. Here’s the reason why:
https://www.youtube.com/watch?v=DwGO7Gp5ZKY

However, City Mayor Rodrigo Duterte of Davao City has only expressed mixed signals as to whether he will give in to the people’s wishes or not, even at this late hour. A group of businessmen, the Anonymous Patriots for a Peaceful and Progressive Philippines (AP4), had pledged they would donate P1 billion for his campaign with no strings attached. Still, the ironman from Mindanao refuses to accept the challenge.
One of the best presidents we thought the country will never have has decided to finally try it again. The ever feisty Sen. Miriam Santiago has decided to run for the third time. But her problem on cancer may deter the public from choosing her. Of course, if she is reading this, we humbly recommend the only sane solution to the problem.

She will be running with Sen. Ferdinand Marcos Jr., the son of the late dictator who planned to fully industrialize the country against the Jesuit Khazarian Mafia’s wishes.
But, of course, highly brainwashed and stupid electorate won’t appreciate high level of thinking and independence of the mind, so they won’t vote for Miriam and BongBong.
It has been known that one of the reasons the late dictator was deposed is the impending commissioning of the Bataan Nuclear Plant in 1986, which should have given us at least 50% lower electricity cost, of which the likes of Abotiz and Lopez can’t accept. Ever since, all the components for the planned industrialization were privatized.
The only problem with BongBong Marcos is his family’s questionable participation in the plunder of the treasures of the Maharlikan Kingdom.

More information regarding Maharlika is available through this article:

The hidden power behind the office of the president has made it difficult for the people to free themselves from the clutches of poverty.  Since the first day of automated elections, there are still unaddressed procedural concerns that warrant everyone’s attention:

The Presidential Election 2016 of this country will decide if we are indeed ready to replicate all the global reforms that are being implemented by progressive countries through the leadership of the BRICS, and not just swallow hook, line and sinker the United Nations’ Agenda 2030 technocratic dictatorship agenda cloaked under the “climate change” hoax.
The people behind this blog only wish that the next Philippine president would be as independent minded as Russia’s Vladimir Putin.
The names below are displayed randomly to be fair to all candidates. Vote Wisely.
[polldaddy poll=”9122481″] [polldaddy poll=”9122553″] Thank you very much for participating and for sharing this page to your social media account using the buttons below.