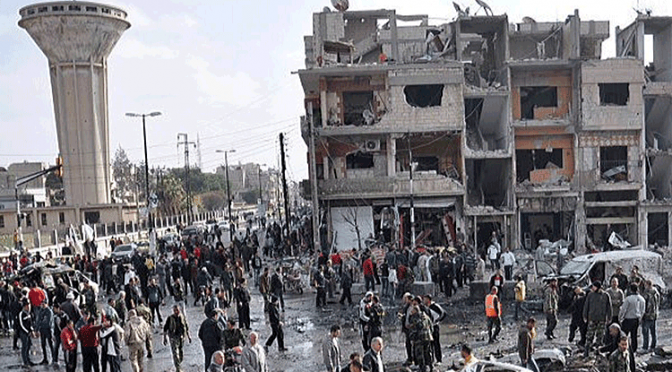 Over 80 were killed and almost 200 severely wounded when a car bomb exploded near a busy school street inside Syria during rush hour.
After the car bomb exploded, two men wearing explosive belts detonated themselves as crowds gathered after the first explosion.

A series of explosions has rocked the Sayeda Zeinab district in the southern part of Syria’s capital Damascus. At least 83 people were killed and almost 200 injured when two suicide bombers reportedly struck crowds gathered in the area of the first blast.
The first massive explosion was a car bomb that targeted a busy school street during rush hour, Syrian state news agency SANA reported citing local authorities. The blast was followed by two additional explosions allegedly carried out by suicide bombers wearing explosive belts, and targeted the crowds gathered at the site of the tragedy.
The attacks claimed the lives of at least 83 people, according to local media, while at least 178 were injured, many of them severely.
A police source told RIA Novosti two of the suspected coordinators of the blasts were detained by security forces in the Syrian capital, confirming that at least 80 people were killed in three explosions. Meanwhile, according to other reports, there could have been four blasts.
The Islamic State (IS, Daesh, formerly ISIS/ISIL) terror group has claimed responsibility for the bomb attacks in Damascus.
… Earlier on Sunday, dozens of people were killed and injured in a double bombing attack in Homs. The local governor said that 34 people have died in the explosions, but RIA-Novosti cited a medical source, who said that at least 46 lives were lost, while 110 others were injured.

https://www.rt.com/news/333181-damascus-blasts-suicide-car/
These series of attacks in Homs and Damascus came just a few hours of heavy Daesh casualties in the war zones in Homs, Aleppo and in Raqqa where civilians are now being used as human shields.
The Daesh terrorists are now experiencing logistical and financial difficulties as lifelines towards Turkey are effectively cut-off.

TEHRAN (FNA)- The Takfiri terrorists’ military positions and gathering centers were razed down by the Syrian army and the National Defense Forces (NDF) in the Eastern part of Homs city on Sunday.
The army units and the popular forces attacked and destroyed the ISIL’s military positions and gathering centers in al-Mosalas region, the surrounding areas of al-Sha’er village as well as Taloul al-Soud, Eastern parts of Thania al-Rajma and Jabal al-Hayal in Eastern Homs city.
Meantime, other army units annihilated the military positions and gathering centers of Al-Nusra Front terrorists in al-Nasr region in Northeastern part of Homs city.
The al-Nusra Front’s military positions in al-Jasemiya village in Al-Nasr region and also Tal Beit Mansour village also came under the Syrian army’s attacks today.
Ina relevant development earlier today, the Syrian air force jets conducted a series of airstrikes to destroy a number of ISIL terrorists’ positions in Homs province.
The military sources on the ground said that the terrorist groups also have sustained a growing number of losses in the aerial attacks when the Syrian fighter jets hit ISIL positions and their vehicles transporting terrorists in the surrounding areas of  the city of al-Quaryatayn and nearby Southern areas of al-Mahasa in the Southeastern regions of Homs province.
“The Syrian fighter jets also targeted several ISIL vehicles on a road in al-Buseiri area, near Palmyra (Tadmur) highway, putting to death all terrorists in the vehicles,” the reports said.
On Saturday, the Syrian army and air force continued their advances in Homs province, killing scores of militants and wounding them in fierce clashes on the outskirts of the al-Quaryatayn city in the Southern part of Homs province.
Tough battle broke out between the Syrian government troops and militants in Maheen, al-Quaryatayn, Tal al-Aswad and Sania al-Rajma as the Syrian fighter jets were heavily pounding other areas.
http://en.farsnews.com/newstext.aspx?nn=13941202001213

TEHRAN (FNA)- The militant groups in Syria’s Aleppo province reported on their social media that at least 50 ISIL militants have been killed by the Syrian army forces and their allies on Sunday as the pro-government forces kept on their advances in militant-held areas in the Eastern regions of the province.
No further detail has been released on the casualties and the exact location of the operations.
The Syrian army soldiers and their allies have intendified their ground, artillery and air attacks on the militants across the Northern province of Aleppo on Sunday. The army attacks were carried out on a number of militant strongholds in the Eastern, Northeastern, Northern, Western and Northwestern parts of Aleppo province, inflicting major losses on the terrorists.
In a significant development, the Syrian government forces’ operations against the ISIL militants in the Eastern part of Aleppo province ended in the recapture of 31 villages and farms.
The ISIL militant group sustained more setbacks during the heavy attacks by the Syrian Army and popular forces in the Eastern part of Aleppo and have withdrawn from 31 villages, farms and heights.
Earlier, the Syrian army and its allies gained full control over several important towns and villages as well as a silo in Eastern Aleppo.
http://en.farsnews.com/newstext.aspx?nn=13941202001309

TEHRAN (FNA)- The ISIL terrorist group has launched a large-scale campaign in Raqqa to capture all civilians in the city and its countryside to use them as human shields as the Syrian government forces, with the Russian aerial back up, have significantly pushed Northeast towards Raqqa from Aleppo and Hama provinces.
“The recapture of around 10 square kilometers in Ithriya region towards Raqqa province by the Syrian Army troops and the National Defense Forces (NDF) has caused serious concerns among ISIL’s top commanders in Raqqa and they have, thus, started capturing and kidnappding citizens in and around the city of Raqqa in a bid to use them as human shield in the battlefields to slow down the army advances,” several local sources near the city of Raqqa – the self-proclaimed capital of the ISIL – said on Sunday.
Meantime, the Russian air fleet pounded several military columns of the ISIL fresh forces heading Ithriya battlefield to save their defeated comrades in Hama province.
Reports said on Saturday that the Syrian army and the NDF seized back several strategic military checkpoints in Raqqa province with the help of the Russian air support.
The army units and popular forces took full control over al-Rabe’a and al-Khamesa checkpoints, as well as al-Masbah, al-Alam and al-Talal military checkpoints located on al-Raqqa road near Zakiya town in fierce clashes with the ISIL terrorists.
http://en.farsnews.com/newstext.aspx?nn=13941202001018
Hours before the attacks inside Damascus and Homs, , Erdogan claimed he has the right to send in troops to other countries whenever he wants to…

#Turkey has the right to conduct operations in #Syria, elsewhere to combat terror: Erdoğan https://t.co/6R2AdeEWPY pic.twitter.com/vrKiTnrywr

Yeah, he can send in troops whether Turks, or Daesh, and does have a talent to overrate himself.