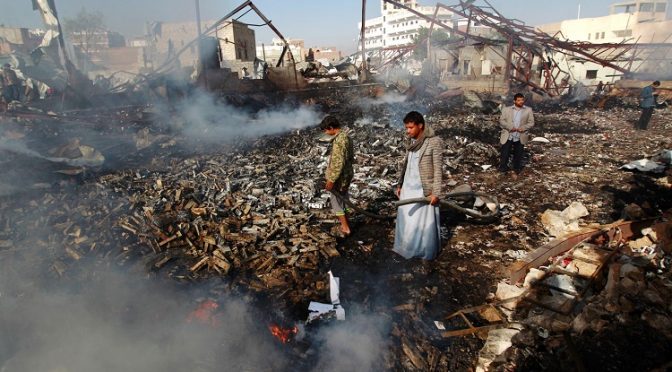 As Nazionists are moving heaven and hell to sway the voters’ nod towards Hillary Clinton, using the full power of the mainstream media, and some undocumented coercions along the way, clued in only by undeniable list of murdered Clinton close aides,
… the White Hats are also doing their best to pin down the perennial warmonger corporate candidate by releasing another devastating email about the “Good News” celebration regarding the sales of more F15s to Saudi Arabia, now targeting Yemeni civilians, as pictured above.

All the grave revelations against the Clintons should have avoided the inclusion of that name in the primaries, and that’s what is strange with this US democratic processes.
Isn’t it better that when a person who is subject to an ongoing investigation be excluded from any electoral exercise to increase the quality of our choices?
Why is Clinton even given, not just a free pass for mishandling sensitive information, but a shot at the presidency, while the likes of CIA whistleblower Jeffrey Sterling is being treated harshly?
The only explanation to these simple questions is that the United States is nothing but an undeclared fascist dictatorship, and the Americans are yet to take a decisive action to rectify the situation.

Lee Fang✉[email protected]​[email protected]
The shockingly brutal Saudi air campaign in Yemen has been led by American-made F-15 jet fighters.
The indiscriminate bombing of civilians and rescuers from the air has prompted human rights organizations to claim that some Saudi-led strikes on Yemen may amount to war crimes. At least 2,800 civilians have been killed in the conflict so far, according to the United Nations — mostly by airstrikes. The strikes have killed journalists and ambulance drivers.
The planes, made by Boeing, have been implicated in the bombing of three facilities supported by Doctors Without Borders (Médicins Sans Frontières). The U.N. Secretary General has decried “intense airstrikes in residential areas and on civilian buildings in Sanaa, including the chamber of commerce, a wedding hall, and a center for the blind,” and has warned that reports of cluster bombs being used in populated areas “may amount to a war crime due to their indiscriminate nature.”
Bombs dropped by fighter jets are pulverizing Yemen’s architectural history, possibly in violation of international humanitarian law.
A few years earlier, as secretary of state, Hillary Clinton made weapons transfer to the Saudi government a “top priority,” according to her closest military aide.
And now, newly released emails show that her aides kept her well-informed of the approval process for a $29.4 billion sale in 2011 of up to 84 advanced F-15SA fighters, manufactured by Boeing, along with upgrades to the pre-existing Saudi fleet of 70 F-15 aircraft and munitions, spare parts, training, maintenance, and logistics.
The deal was finalized on Christmas Eve 2011. Afterward, Jake Sullivan, then Clinton’s deputy chief of staff and now a senior policy adviser on her presidential campaign, sent her a celebratory email string topped with the chipper message: “FYI — good news.”
The email string was part of a new batch of emails from Clinton’s private server, made public on Friday evening as the result of a Freedom of Information Act lawsuit.
One American official, whose name is redacted in the emails, said he had just received confirmation that Prince Salman, now the king of Saudi Arabia but at the time the senior Saudi liaison approving the weapons deal, had “signed the F-15SA LOA today” and would send scanned documents the following day.
“Not a bad Christmas present,” he added.
Another official, whose name is also redacted, confirmed that a Saudi general who had been working with U.S. officials was “pleased, as are all of us,” and said he would soon contact executives at Boeing.
The congratulatory tone continues through the email chain with other officials, also with redacted names, calling the weapons deal “Great news!”
On December 26, Jeremy Bash, then-chief of staff at the Pentagon, sent the email string, titled “F-15SA Christmas Present,” to Sullivan, who sent it to Clinton with his own note at the top.
David Sirota and Andrew Perez have previously reported for the International Business Times that Clinton’s State Department was heavily involved in approving weapons sales to Saudi Arabia. As weapons transfers were being approved, both the Kingdom of Saudi Arabia and Boeing made donations to the Clinton Foundation. The Washington Post revealed that a Boeing lobbyist helped with fundraising in the early stages of Hillary Clinton’s current presidential campaign.
Jeremy Bash is now managing partner at Beacon Global Strategies, a consulting firm that provides advice to Clinton on foreign policy while providing paid advice to the military contracting industry.
Related:

Top photo: Yemeni men inspect the damage to a sewing workshop in Sanaa hit by a Saudi-led coalition airstrike on Feb. 14, 2016. The shop’s owner told AFP that “two employees, including a 14-year-old boy, were killed and 15 others wounded in the overnight air raid.”
https://theintercept.com/2016/02/22/saudi-christmas-present/