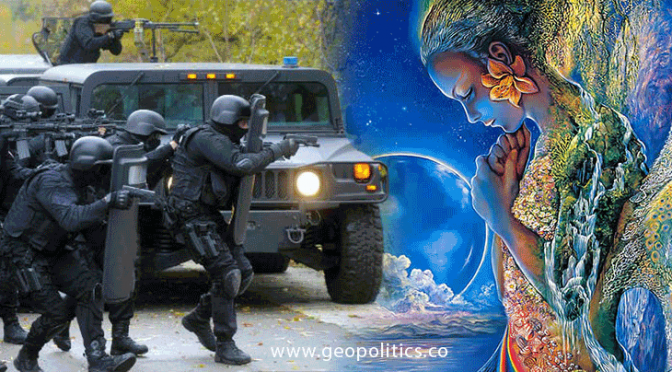 Some say that we are in constant exposure to a “divide and control” dialectic to limit the conversation into two, or more derivative narratives sowing disagreements and conflicts all the time while the controllers plot the real course for humanity, with their own interests properly served.

Such pessimistic scenario presupposes that both the Western and the Eastern control groups are working together for a common objective to guide humanity according to their own vision, or lack of it.
We are not discounting any possibilities of a perpetual dialectic as much as we are not discounting the possibility of a real move to eliminate the Old Power Nexus with their Old Concepts altogether.
We have been following both developments without bias to either of one. After all, it is the readers that are the ones paying for the work we do.
At present, we can say that while the Khazarian Mafia from the West is still on course with their Orwellian cashless and surveillance society for Western population, together with its parallel genocidal plans against everyone, the East continues to lay down the foundation of a new economic sphere, through the CIRP infrastructure and the BRICS New Silk and Maritime Road.
The move to a cashless society and negative interest rates are the only options left for the Rothschild banking dynasty as they don’t really have hard assets to begin with. All they have from the very beginning is that scheme to use everyone’s asset as a leverage to fool the rest with dizzying paper shuffling and sophisticated financial terminologies to ward off the uninitiated.
So, when the East started demanding for asset-backed currencies in payment for their manufactured goods, the West’s inability to comply with the new rules resulted to the halting of its shipping industry as shown by the downward trajectory of the London-based Baltic Dry Index starting August of last year and for the first 2 months of the current year.
Although the BDI is picking up this month, this is not reflective of the data coming out from the Chinese front, i.e. Chinese export drops 25%.
BBC reports,

Chinese exports have seen their sharpest drop in almost seven years, adding to concerns over the health of the world’s second largest economy.

The weak data comes on the heels of Beijing registering the slowest economic growth in 25 years.

China’s National People’s Congress, currently underway in the capital, has just revised the 2016 growth target down, predicting a “battle for growth”.

Western media would like to project that it’s China’s economy that is crashing by not saying that the country’s export data is dependent on the capacity of its customers, i.e. the West, to pay.
In this internet age, telling half-truths is an effective method of only fooling oneself. The financial desperation cannot be denied anymore, even the Church is going cashless, too.

Tithe.ly is one of a handful of apps leveraging that spending behavior for the good of the church. Pushpay, which about 3,000 congregations employ, works similarly; worshipers decide whether to donate to a general budget or a specific program the institution designates.

Another, EasyTithe, features a text-to-give option. It also provides technology for a Square-like credit card reader to await the faithful in church lobbies. Regardless of which app a congregation chooses, the point is convenience.

“We call it frictionless giving,” says Dean Sweetman, Tithe.ly’s co-founder and a former minister at C3 Atlanta. He designed the app with C3’s wallet-light clientele in mind:

“We see people giving all times of day and night. Nothing stands in the way.”

Although they deemed it too farfetched that the current BRICS Alliance would become a reality, the Old Establishment had been preparing for this scenario, i.e. the East Initiative to challenge Western Hegemony, all along using technologies classified under the all-encompassing “national security” suppressions. And yes, they do honestly believe until now that “nothing stands in their way.”
Their primordial mistake was their overconfidence when they thought they were just exploiting cheap Chinese labor to their advantage, while Chinese spies and hackers are actively penetrating Western electronic infrastructures for years, stealing supposedly well-guarded technologies.
It must be said in the outset that these “stolen” technologies actually belong to the whole of humanity for it is the East that’s been paying for these advancements more than a hundred years ago when the West borrowed Asian assets, i.e. massive historical gold bullion now known as Global Collateral Accounts, purposely for the West to develop the planet through its Tesla Science.
The Roman Empire, through the Nazis, reneged on this divine contract. Multiple covert wars ensued and are still developing until today. Fortunately for the Earthlings, it seems that the Good Guys are winning, as both the Trident nuclear programme and Aegis Ballistic Missile Defense System (Aegis BMD or ABMD)[1] are not without equal anymore, or are effectively rendered useless [here, here], while the Black Nobility and the Khazars are in panic mode and desperate due to their massive defeats in all geopolitical fronts, and even at home:

Instead of using their scientific achievements, through the aforementioned financial support of the East, the Western Oligarchy chose to use them in harming the population.
The US Navy has been caught, more than a year ago, using electromagnetic radiators in public places for 5 years with frequencies which they themselves classified as hazardous, i.e.:

“If the US Navy gets its way, it will begin flying Growler supersonic warplanes over Olympic National Forest and wilderness areas of the Western Olympic Peninsula next September in order to conduct electromagnetic warfare training exercises.

As Truthout previously reported, this would entail flying 36 jets down to 1,200 feet above ground in some areas, in 2,900 training exercises lasting up to 16 hours per day, 260 days per year, with the war-gaming going on indefinitely into the future. The Navy’s plans also include having 15 mobile units on the ground with towers emitting electromagnetic radiation signals for the planes to locate as part of their exercises.”

This is in spite of the fact that the US Navy knew beforehand about its potential dangers on the population and Nature,

“Exposure to RF energy of sufficient intensity at frequencies between 3 kilohertz (kHz) and 300 GHz can adversely affect personnel, ordnance, and fuel. Potential exposures of this magnitude aboard ships are primarily associated with the operation of various radars and communication systems as illustrated in the photo below.

Biological effects that result from heating of tissue by RF energy are often referred to as “thermal” effects. Exposure to very high levels of RF radiation can be harmful due to the ability of RF energy to heat biological tissue.

In a healthy human body, the thermo-regulatory system will cope with the absorbed heat until it reaches the point at which it cannot maintain a stable body core temperature. Beyond this point the body may experience hyperthermia (heat exhaustion) and/or irreversible damage to human tissue if the cell temperature reaches about 43 degrees Celsius.

There is a higher risk of heat damage for organs that have poor temperature control, such as the lens of the eye and the testes. The amount of absorbed energy to produce thermal stress is affected by the health of the individual (some medical conditions and medications may affect thermoregulation), environmental conditions (higher ambient temperature and relative humidity make it harder for the body to release heat), and physical activity (strenuous work can raise rectal temperature by itself).

Radiated energy can also result in high levels of induced and contact current through the body when in close proximity to high-power RF transmitting antennas. The biological hazards associated with electromagnetic radiation, established by the Institute of Electrical and Electronics Engineers (IEEE) C95.1 Standards Committee and adopted by the Tri-Service Electromagnetic Radiation Panel, is in DODINST 6055.11, Protection of DoD Personnel from Exposure to Radiofrequency Radiation and Military Exempt Lasers.

In addition to personnel concerns, RF fields may generate induced currents or voltages that could cause premature activation of electro-explosive devices in ordnance, equipment interference or sparks, and arcs that may ignite flammable materials and fuels.”

That is on top of the electromagnetic radiation emitted by your own cellular phone certified to cause cancer by the World Health Organization itself.

Much earlier on, the government has been using drones to monitor civilian activities for reasons that can only be considered as bordering on paranoia.
In a nutshell, here’s how they justify the cloak and dagger scheme of mass surveillance:
“While warrants are appealing to privacy advocates, the enactment of overly broad restrictions on drone use can curtail non-invasive, beneficial uses of drones. Legislators should reject a warrant-based, technology centric approach as it is unworkable and counterproductive. Instead, legislators should follow a property rights centric approach, coupled with limits on persistent surveillance, data retention procedures, transparency and accountability measures and a recognition of the possibility that technology may make unmanned aerial surveillance more protective of privacy than manned surveillance.  This paper makes five core recommendations:

http://www.brookings.edu/research/reports2/2014/11/drones-and-aerial-surveillance
Recently, Pentagon has admitted the above mass surveillance to have been going on for at least a decade:

The Pentagon has deployed drones to spy over U.S. territory for “non-military missions over the past decade, but the flights have been rare and lawful, according to a new report.

The report by a Pentagon inspector general, made public under a Freedom of Information Act request, said spy drones on non-military missions have occurred fewer than 20 times between 2006 and 2015 and always in compliance with existing law.

The report, which did not provide details on any of the domestic spying missions,  said the Pentagon takes the issue of military drones used on American soil “very seriously.”

The Pentagon has publicly posted at least a partial list of the drone missions that have flown in non-military airspace over the United States and explains the use of the aircraft. The site lists nine missions flown between 2011 and 2016, largely to assist with search and rescue, floods, fires or National Guard exercises.”

All of these backward applications of science and technologies can only be rectified by the people exercising their inalienable rights and asserting their dignity as a human being. But, how can they do it if the electromagnetic frequencies being radiated are already controlling their minds what to think?
In much the same way as, how can we expect a different outcome participating on the same methods like the musical chairs they keep playing there in Washington DC, over and over again?
The current monetary system, however they cook it, will never work. It cannot work because it is in conflict with prevailing automation technologies that requires killing people with hunger and deliberate poisoning of the food sources.
Conversely, not all useful technologies can be released without disrupting the current monetary-based economic system.
We have, therefore, reached that crossroad where either we use the full extent of our technological discoveries that should allow us to create a highly advanced society, free of hunger, disease and war, or we preserve the control of money by staying primitive.
Wherever this world goes, realize that you are partly responsible for it by your action, or inaction.
There are no excuses.

One thought on “Global Reset: When Past & Future Collide… Today”