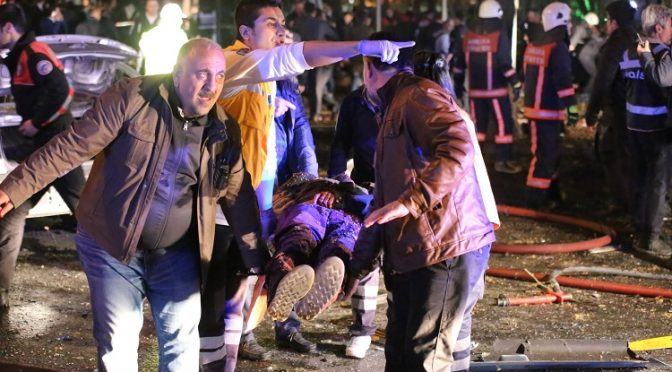 A car bomb went off in Ankara yesterday killing 37 and wounding more than a hundred. The attack came in 2 days after Erdogan’s involvement in the false flag sarin gas attack on Syrian civilians resurfaced.

This recent exposure has the potential of defeating Erdogan’s recent EU blackmail attempt using refugee flooding which raises the cost to $6 billion, and a shot at the European Community membership.
A prominent American investigative journalist, Robert Parry, has re-exposed the events surrounding the Obama decision to delay the large scale military operations against Assad government in Syria, in complete disagreement to the US neocons wishes at the time.
“It’s now clear that if Obama had launched a major bombing campaign against the Syrian military, he might have inadvertently cleared a path for Al Qaeda’s Nusra Front or the Islamic State to seize control of Damascus, touching off an even more devastating human catastrophe. But “regime change” in Syria was a neocon obsession, even if it carried the risk of terrorist groups gaining control of a major Middle Eastern nation.
In the weeks and months after the sarin attack, the case against Assad continued to crumble. The U.N. inspectors recovered only one rocket carrying sarin and it was incapable of traveling the distance that would have indicated that it was fired by the Syrian military. Then, investigative reporter Seymour Hersh reported in 2014 that intelligence officials had traced the attack to radical jihadists in apparent collaboration with Turkish intelligence. More recently, I’ve been told that U.S. intelligence now agrees with Hersh’s reporting.
In other words, Clapper’s recognition that there was no “slam dunk” case implicating Assad has been vindicated by subsequent evidence. But Official Washington’s foreign-policy elite simply can’t accept these findings, instead maintaining the myth that Assad flouted Obama’s “red line” and that Obama lost his nerve and thus undermined U.S. “credibility.” This myth is so beloved among neocons and their liberal-interventionist allies that it can’t be surrendered regardless of its lack of evidentiary support.”
https://consortiumnews.com/2016/03/10/neocons-red-faced-over-red-line/
Erdogan’s appetite for war against Assad is best illustrated in this leaked account where the ISIS benefactor tried to apply pressure against Obama,
An American foreign policy expert who speaks regularly with officials in Washington and Ankara told me about a working dinner Obama held for Erdoğan during his May visit. The meal was dominated by the Turks’ insistence that Syria had crossed the red line and their complaints that Obama was reluctant to do anything about it. Obama was accompanied by John Kerry and Tom Donilon, the national security adviser who would soon leave the job. Erdoğan was joined by Ahmet Davutoğlu, Turkey’s foreign minister, and Hakan Fidan, the head of the MIT. Fidan is known to be fiercely loyal to Erdoğan, and has been seen as a consistent backer of the radical rebel opposition in Syria.
The foreign policy expert told me that the account he heard originated with Donilon. (It was later corroborated by a former US official, who learned of it from a senior Turkish diplomat.) According to the expert, Erdoğan had sought the meeting to demonstrate to Obama that the red line had been crossed, and had brought Fidan along to state the case. When Erdoğan tried to draw Fidan into the conversation, and Fidan began speaking, Obama cut him off and said: ‘We know.’ Erdoğan tried to bring Fidan in a second time, and Obama again cut him off and said: ‘We know.’ At that point, an exasperated Erdoğan said, ‘But your red line has been crossed!’ and, the expert told me, ‘Donilon said Erdoğan “fucking waved his finger at the president inside the White House”.’ Obama then pointed at Fidan and said: ‘We know what you’re doing with the radicals in Syria.’ (Donilon, who joined the Council on Foreign Relations last July, didn’t respond to questions about this story. The Turkish Foreign Ministry didn’t respond to questions about the dinner. A spokesperson for the National Security Council confirmed that the dinner took place and provided a photograph showing Obama, Kerry, Donilon, Erdoğan, Fidan and Davutoğlu sitting at a table. ‘Beyond that,’ she said, ‘I’m not going to read out the details of their discussions.’)
http://www.lrb.co.uk/v36/n08/seymour-m-hersh/the-red-line-and-the-rat-line
To Obama’s credit, he did call off the sending of bombers into Syria which paved the way for Putin to intervene with the proposal Syrian chemical destruction under UN oversight.
The combined decisions and actions of Obama, Putin, Assad, and most notable of all, Gen. Dempsey’s and that of the intelligence community, effectively checkmated the US neocons ambitions in Syria which is to lay more oil and gas pipelines and averted Rothschild’s Greater Israel expansion.
But the battle is still raging, and for the US, it doesn’t really have much options to choose from,

Barring a major change in policy by Obama, Turkey’s meddling in the Syrian civil war is likely to go on. ‘I asked my colleagues if there was any way to stop Erdoğan’s continued support for the rebels, especially now that it’s going so wrong,’ the former intelligence official told me. ‘The answer was: “We’re screwed.”

We could go public if it was somebody other than Erdoğan, but Turkey is a special case. They’re a Nato ally. The Turks don’t trust the West. They can’t live with us if we take any active role against Turkish interests. If we went public with what we know about Erdoğan’s role with the gas, it’d be disastrous. The Turks would say: “We hate you for telling us what we can and can’t do.”’

Well, the Obama administration has already gone public which brings us to yesterday’s massive explosions in Ankara, killing 37 and a hundred more injured, 19 of which are in serious condition.
As expected Ankara is blaming Kurdish ‘terrorists”. But, there could be other suspects, too:

Understandably, the Turkish population is in dire situation right now as Erdogan is not only shutting down freedom of the press, but is also actively threatening the Judiciary. He is now falling into a point of no return, a trap where dictatorship is the only option left to buy himself more time.