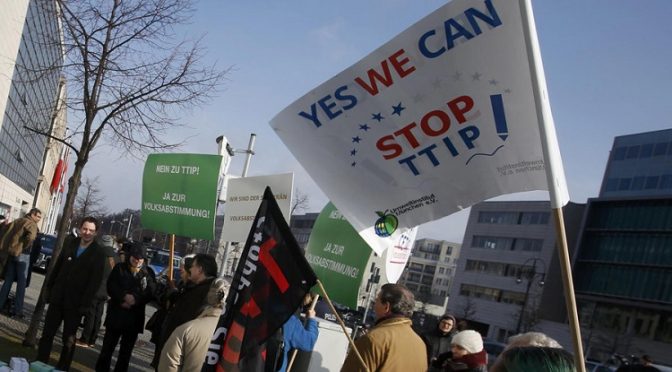 The Transatlantic Trade and Investment Partnership is not just meant to isolate China from global trade but to weaken what’s left of the protective trade barriers that nations are struggling to sustain.

It’s not only that republics have long been reduced covertly to corporation, they are also waging an open war on the minimum safety, health and environmental regulations which are still keeping the planet from complete devastation, and the population, from annihilating each other through economic starvation.

Sam Gerrans @SamGerrans
The new trade negotiations – TTIP – sound dull. It combines the US and EU markets to make the process of fleecing the sheep simpler and cheaper for the wolves. Standard procedure, you may say – and you would be right.
But what is interesting is that any pretense at democracy has been dropped from the propaganda song sheet.
The Telegraph summarized TTIP thus: “The Transatlantic Trade and Investment Partnership is a series of trade negotiations being carried out mostly in secret between the EU and US.
As a bi-lateral trade agreement, TTIP is about reducing the regulatory barriers to trade for big business, things like food safety law, environmental legislation, banking regulations and the sovereign powers of individual nations.
It is, as John Hilary, Executive Director of campaign group War on Want, said: “An assault on European and US societies by transnational corporations.”

TTIP means US govt and big business will have more power over EU laws https://t.co/dKNDWQsXn2 #nottip

The advantage of TTIP branding from a population-management point of view is that it sounds so boring; a bit like a truncated version of Tippex as envisaged by someone with dyslexia – how evil can it be?
The answer is: more evil than drinking noxious white fluid designed to correct typing errors.
Under TTIP, public services, education and health services will be open for tender. EU food and cosmetics standards will be brought in line with the much lower standards in operation in the US. What banking protections exist after the last collapse will likely be removed. The walls in data privacy will become porous between the two blocs. And since the US is party to NAFTA, it will mean that EU workers will be in competition with Mexico.
Nothing will be allowed to stand in the way of making a buck. As the Telegraph puts it: One of the main aims of TTIP is the introduction of Investor-State Dispute Settlements (ISDS), which allow companies to sue governments if those governments’ policies cause a loss of profits. In effect it means unelected transnational corporations can dictate the policies of democratically elected governments.

Put nicely, then, TTIP is a drive to the lowest common denominator between the laws which currently exist in the EU and the US combined with the creation of an unaccountable executive branch committed only to the interests of corporations.
This means the workers in both areas will be on an accelerated race to the bottom, able only to compete on the basis of slave wages.
Put more generally, it is the creation of a mega-bloc designed to subsume the EU by stealth and place it in the thrall of the powers which control the US.
Of course, those tasked with selling TTIP to the people it is going to fleece claim nothing but upside. They cite the usual carrots: more jobs, higher wages, lower prices.
But then they would say that, wouldn’t they?
The reality is that TTIP is being pushed through in the EU by US authorities and we have no choice in the matter.
End of democracy
This is where a modern commentator is supposed to be outraged: corporations and government cabals are in collusion – how could they!
But I don’t see it that way. This isn’t a freak occurrence.
Socrates placed democracy one step away from tyranny. What’s happening now isn’t democracy warping into something fiendish and weird. This is democracy’s natural pathway; where it was always going.
Just because democracy was sold to us as something gushy and cuddly, and which flattered us into thinking our opinion counts for something doesn’t change its fundamental nature.
The founding fathers of America knew all about democracy. And despite the fact we are now told they were in favor of it, that is a lie. Rather, they instituted a republic.
John Adams, for example, said of democracy, “Remember, democracy never lasts long. It soon wastes, exhausts, and murders itself. There was never a democracy yet that did not commit suicide.”
Well, this is what suicide looks like.
No choice
For those who cling to the idea of democracy, the shift in presentation under TTIP will be worrying.
I don’t get teary-eyed about democracy because I have never believed in it. The fact that a few rich, powerful people do what they want and make a lot of poor, weak people put up with the result by means of inducements, distractions and other strategies makes far more sense to me than narratives about inclusion and choice.

#TPP tips: What is the Trans-Pacific Partnership and why you should care http://t.co/VfMZzIh8ZN pic.twitter.com/veTcOJLw9O

When the EU was being phased in back in the 1970s, there was still a pretense of choice. Of course, those with real power left nothing to chance. They put in placemen like Ted Heath in the UK – a man who was likely a pederast if not worse and, thus, completely blackmailed and owned.
As formerly sovereign countries were inveigled into the trap by degrees, their populations were soaked in propaganda before the plebiscite was staged. If they voted wrong at any point, they were told to vote again. And they kept voting until they got it right.
We never had a choice before. We don’t have one now. But it’s refreshing that our rulers now openly demonstrate that they understand that they have successfully potty-trained the population into being too stupid and lazy to care.
What is interesting to me about TTIP is that they have dispensed with the pretense of caring what we think.
And I don’t blame them.
If TTIP is about doing away with irritating and expensive encumbrances – about streamlining business processes and extracting even more from even less – you may as well begin as you mean to continue: just ignore the plebs and dispense with any pretense that you care what they think. It’s more efficient.
So for those of us who understand that democracy only exists to legitimize what has already been decided upon by the ruling elite, TTIP is a breath of fresh air.
We never had a choice before. We don’t have one now. But it’s refreshing that our rulers now openly demonstrate that they understand that they have successfully potty-trained the population into being too stupid and lazy to care.
Distracted by iPhones and the Kardashians, ill-disciplined, ignorant, solipsistic and drowning in sea of fleeting preferences and peccadillos, our mental faculties have been worn into a rut of conformity by a diet of fake food, vulgar entertainment, and a degraded monotony – laughingly called music – which is designed to create and keep slaves.
So it doesn’t matter what you think. Get angry or not, TTIP is going through.
World government
No matter how bad you think it has got over the last twenty years – enjoy what you’ve got, because what’s coming is going to be a lot worse.
Once TTIP has gone through, there will be more. A series of new agreements will magically appear, the purpose of which will be to stitch each of the world’s main trading blocs together into a single slave factory – one in which neither you nor the really fab opinion you just found that you have count for anything. You can share your heart out until your face is as blue as a Facebook thumbs-up, it won’t make any difference.
Clearly, what the people who own the top think tanks are bringing in is a world government, a smart world in which everything is standardized, regulated, controlled and recorded, with all the inefficiencies expunged, and all the waste flushed away. By waste I mean a middle-class capable of rational thought and action.
They are on course for just such a future, and whatever fuzzy happiness you have planned for you and your family doesn’t feature anywhere in it.
The elite doesn’t care what we think. Why should it? Almost everything most people are capable of thinking was given to them by a media owned by the elite; people’s opinions are just input-echo.
What matters is what people do. And the fact is that this generation won’t stand up until there is nothing left in the fridge.
Sure, we may not ‘like’ it in the Facebook sense of the word. But are you going to come out from behind your avatar and pretend name and do anything about it?
Our rulers don’t think so.
A solution, if it exists, begins at the level of personal responsibility and morality. Every time we go along to get along, bend over, say yes, comply, buy rubbish we don’t need, digest degraded entertainment and participate in the vapid floral dance which has replaced real human interaction, we are bringing in the very system TTIP represents; every time we download pre-packaged opinions, hand in supine essays, take fake jobs we hate and don’t believe in, waste ourselves with pornography, or allow ourselves to be kettled into thought prisons by fear of criticism by ignorant people we feed the monster.
By looking to government – any government – for solutions, the best-case scenario is just another form of slavery; all of which suits our masters just fine.
The only way out of slavery I know of is to make the choice to be free. Clearly, no-one can do that but you.
And if you get serious about it, don’t expect to be liked by that many people.
https://www.rt.com/op-edge/336362-fake-freedom-moves-ttip/
This is inevitable under a capitalist system where every incorporator knows no bounds to his own greed, while the regulators can only come up with legislated limitations they can’t enforce.
Why can’t we have a system that avoid the birth of corporate greed in the first place?
Why can’t we have a system where cooperation is the only motivation and not profit and self-aggrandizement?
Is it really impossible to motivate people to contribute to our collective progress with mere honor and recognition as compensation instead of gaining plutocratic material wealth to solicit fear in lieu of respect?
What if there’s a system that sends every living soul to a world where every basic need is fully satisfied and creativity is bounded only by one’s power of imagination and not by the artificial scarcity of material resource?