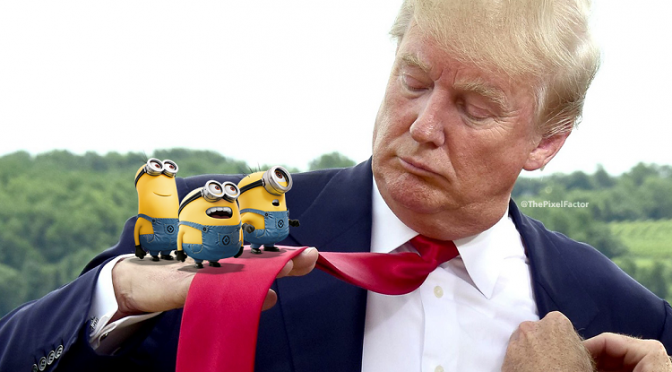 Donald Trump, it seems, has no problem he can’t overcome to win the Republican nomination. In fact, everybody around the world are already anticipating a Trump presidency.

It’s partly because he has effectively made a connection to all those wary of America’s self-inflicted economic woes and deteriorating geopolitical influence abroad, by not following the NeoCons’ script to flow from his own over indulgent mouth during the GOP debates.
He successfully projected that he’s not one of them.
But, why is he surrounding himself with hard-core war hawks from the Academi aka Blackwater, and those accused of killing and torturing civilians in the Middle East, as foreign policy advisers?
Why does it always feel like selecting a president is a trial and error experiment?

Sputnik, 02:15 22.03.2016 (updated 06:21 22.03.2016)
As a businessman with no governing experience, foreign policy has always been an especially vulnerable aspect of the billionaire’s presidential campaign. As Trump inches closer to the Republican nomination, his campaign has begun to shift gears, as he will likely face-off against former US Secretary of State Hillary Clinton.
To distance himself from the Democratic frontrunner, he appears to have adopted an isolationist viewpoint. During an interview with the Washington Post on Monday, Trump questioned the need for the NATO alliance.
“We certainly can’t afford to do this anymore,” he said. “NATO is costing us a fortune, and yes, we’re protecting Europe with NATO, but we’re spending a lot of money.”
Trump stated a similar position with regards to US involvement on the Korean peninsula.
“South Korea is [a] very rich, great industrial country, and yet we’re not reimbursed fairly for what we do,” he said. “We’re constantly sending our ships, sending our planes, doing our war games – we’re reimbursed a fraction of what this is all costing.”
But while Trump may be voicing support for non-interventionism, his actions suggest otherwise. The billionaire provided the Post with the five-member list of his foreign policy team, and it includes a string of individuals deeply invested in the military industrial complex.
At the top of that list is Keith Kellogg, a retired Army lieutenant. Kellogg is a former employee of CACI International, a “multinational professional services and information technology company” that operates across the world.
In 2004, CACI was sued by 256 Iraqis over its alleged involvement in torture, war crimes, and crimes against humanity, in relation to the Abu Ghraib prison scandal.
Next on Trump’s list is Joe Schmitz, a former inspector general with the US Defense Department and, perhaps even more problematically for Trump’s isolationism, a former employee of security contractor Academi, when the company was still branded as Blackwater.
While Academi was still known as Blackwater, the contractor was vilified after its employees killed 17 Iraqi civilians in 2007. For his part, Schmitz once publicly argued that lawsuits regarding Blackwater’s actions in Afghanistan should be dismissed. He argued that any charges filed in Afghanistan should be subject to regional Sharia law, which, conveniently, does not hold companies responsible for the actions of its employees.
George Papadopoulos, Trump’s third adviser, is the director of the Center for International Energy and Natural Resources Law & Security at the London Center of International Law. While he doesn’t have as questionably hawkish a past as Schmitz and Kellogg, he was a foreign policy adviser to erstwhile presidential hopeful Ben Carson. Given that the neurosurgeon candidate struggled to differentiate “Hamas” from “hummus,” it doesn’t bode well for Trump.
Dr. Walid Phares, another Trump pick, is a professor at the National Defense University in Washington DC. Phares is a former adviser to a violent Christian militia group responsible for a number of human rights violations during the Lebanese Civil War. According to Adam Sewer, writing for Mother Jones, Phares has been described by his colleagues as “one of the group’s chief ideologists, working closely with the Lebanese Forces’ Fifth Bureau, a unit that specialized in psychological warfare.”
Phares served in 2012 as a top adviser to former presidential nominee Mitt Romney, who ran on a promise to “deter Russian ambitions.”
The last name on Trump’s list is Carter Page, a managing partner at private equity firm Global Energy Capital. A former fellow at the Council on Foreign Relations, Page worked on US-style “economic development” in the Caspian Sea region and in former Soviet states.
Trump may claim that he seeks to reign in US adventurism, but based on the records of his chosen advisers, a Trump presidency would likely mean business as usual.
http://sputniknews.com/us/20160322/1036701696/trumps-advisers.html
Every Jesuit is trained to use all methods at his disposal, including verbally attacking Jesuit hierarchy itself, to effectively convince the victim to lower its guard, in much the same way as Trump has been attacking the Oligarchy to which he belongs just to convince everyone that his heart belongs to the people.
https://youtu.be/A02I7JoYLoA
Even, P2 Lodge spokesman Leo Zagami endorses the guy for not being a member of any secret societies. But, that’s only because Freemasonry is not so secret a society anymore.
How much of his own “Make American Great Again” rhetoric would materialize is surely anybody’s guess at this point in time. But if hiring war hawks as advisers is any indication, the Trump presidency is just a continuation of the Obama Janus worship.

7 thoughts on “Will This Makes Donald Trump A NeoCon War Hawk?”