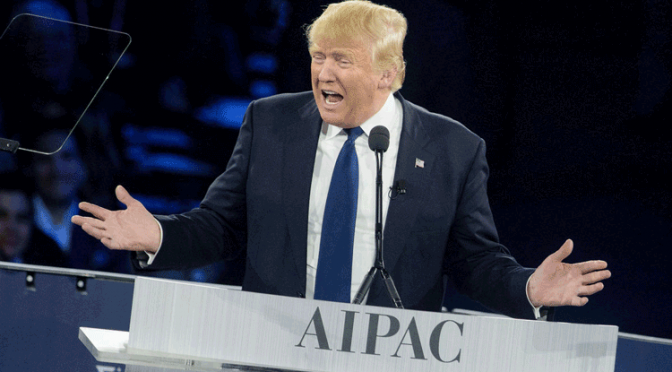 Most of those who are dreaming for a meaningful change in America is hopeful with the Trump presidency. But, will he deliver the goods, or is he going to continue the Zionist policies of his predecessors?

It’s been advertised that he doesn’t belong to any secret societies, nor a puppet of the men behind the Council on Foreign Relations, but are these enough to give us confidence that he is his own man?
What of his speech at the AIPAC where he said all the things a Zionist serf would say to please the crowd from “the only democracy in the Middle East, the State of Israel”?
https://www.youtube.com/watch?v=2ZGgMJ3QDAQ
This “lifelong supporter and true friend of Israel” promised to “dismantle the disastrous deal… that rewards… the world’s leading sponsor of terror… with $150 billion,” clearly alluding to the successful prevention of WW3 with Iran Nuclear Deal.
Part of that deal was the release of Iranian assets subject from economic sanctions and this should not be considered as a reward from the West, as Trump says.
Iran does not intend to use these recovered funds to fund Hezbollah “terrorists” as Zionist panderers, Trump included [see video above], would like us to believe but to rebuild its own economy shattered by Western imperialist sanctions against every non-aligned nation on the planet.

‘But Obama said Iran’s shattered economy needs to be rebuilt after years of sanctions — and it is their money.
“We’re not writing Iran a check,” he said. “This is Iran’s money that we were able to block from them having access to.”
It’s very likely the bulk of the $100 billion will not even be sent back to Iran, says Elizabeth Rosenberg, who worked on the Iran sanctions issue at the Treasury Department and is now with the Center for a New American Security.
“Something that Iran will be interested to do is get access to that money and move it to places where they’d like to invest or do deals,” she says. “That may mean moving it into different currencies as well. And once they can move it into Europe, for example, they’ll be able to engage in different purchases or investment opportunities and seek new partnerships.”
Rosenberg says Iran’s GDP in 2014 was roughly $400 billion. She says that while $100 billion sounds like a lot of money, it pales in comparison to the economic relief Iran can expect if and when companies begin to trade and invest with it. And this would be an incentive for Iran to stick to the agreement.’
http://www.npr.org/sections/parallels/2015/07/16/423562391/lifting-sanctions-will-release-100-billion-to-iran-then-what

Prior to Trump speech at the AIPAC, he was advised not to go there with hundreds of reasons he can choose from David Duke, a Klansman 😉
https://www.youtube.com/watch?v=HV2GhOkQ1yY
But, it seems Trump felt at home at the AIPAC just the same. And who knows maybe David Duke is just doing what he is doing to bring down The Donald?
One thing is pretty clear though — they want to control the whole conversation only about themselves and you forget about the bigger picture, the real issues of the day, the continued chemtrailing, mass vaccinations, economic plunder, mass surveillance, the total reduction on the quality of life, etc.
https://www.youtube.com/watch?v=uo2yLI5dgBE
So, if the incoming president of the United States of America is already pandering to Zionist Israel at this early, how can the Trump admirers expect anything better than the previous Republican administrations?
Should we now say that he is just playing the Zionist game until he gets to sit at the throne?
Was he just parroting what the audience wanted to hear to stop the Jewish mainstream tabloid’s attacks on him?

“Trump delivered a speech that could easily have been written in the Prime Minister’s Office in Jerusalem,” wrote Chemi Shalev, correspondent for Israeli newspaper Haaretz. “He went into the arena as a racist demagogue but soon came out as an ostensibly serious contender.”
Trump, who normally disdains prepared remarks, read his speech out from a teleprompter. His criticism of Obama won applause from the room, and he noted that his daughter Ivanka, who converted to Judaism and married a Jewish man, will soon give birth to a “beautiful Jewish baby”.
http://www.businessinsider.com/r-trumps-love-for-israel-still-not-quite-requited-2016-3

I hope that we’re not just fooling ourselves by saying that since he is not working with Goldman Sachs, he should be a different animal from all of them, Wolves of Wall Street.
He is a corporation, too, and the game is still rigged.
Yes, forget all about pedophilia, raped and sacrificed children, drugs and human trafficking, the Jesuits and UK monarchy, they are the least evil and are still on board. They have made all the necessary banking reforms already according to WDS spokesman Ben Fulford.
https://youtu.be/W0YyWJF8wo4
How can we expect real change when the big Nazionist players are still breathing and are still in positions of power?

15 thoughts on “Is Donald Trump Really an Anti-Zionist?”