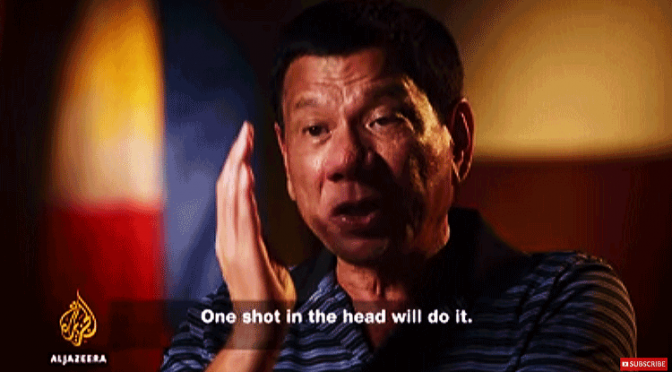 The presidential election in the Philippines come May 9th of this year is no ordinary electoral exercise. This is the first time that all sectors and economic classes of our society are united in making sure that the strongman from the South is inaugurated to the highest office of the land.

There is a very high possibility that if the Oligarchy decides to manipulate the elections like they did in 1992 when they put CIA stooge Fidel V. Ramos in power, succeeding another Jesuit/CIA stooge Corazon Aquino,  who has proven to be ineffective in nation building post-Marcos dictatorship, there will be a full spectrum revolution that includes the already armed rebels in the South.
https://www.youtube.com/watch?v=UadT6qzQCQk
Duterte’s presidency promises to be more independent than all post-Marcos administrations. Already, he refused to kowtow with personalities at the US Embassy in Manila. He is also warning China that if no constructive agreement on the peaceful resolution in the Spratlys is reached within two years, he will plant the flag of the country right at the newly constructed airstrip in the West Philippine Sea.

Aside from having an independent foreign policies, the Duterte presidency is expected to bring peace to the country as both the communists, who have been waging proactive war against government for 40 years now, and Muslim secessionist groups in the South, who have been in perpetual rebellion for the last 400 years, are in full support of the Duterte candidacy.
In fact, they are ready to resume the armed struggle if Duterte is cheated in the coming elections.
https://www.youtube.com/watch?v=UadT6qzQCQk
As in the United States, the local Oligarchy’s hesitance to accept the prevailing realities can be seen through how they manipulate the periodic poll surveys for the last three months as conducted by their own survey companies, Social Weather Station and Pulse Asia. But the more they try to float Grace Poe to a tie with Duterte, the more the people swarm the latter’s campaign sorties.
Even at posh villages in Southern Metro Manila where the rich are, they still come in droves.
https://www.youtube.com/watch?v=Ron96TKOq9I
That crowd in Alabang broke previous records as it took hours for Duterte to reach the stage as people lining up the streets were in thousands.
Why not?
They, too, will benefit largely from the man who effectively eradicated the proliferation of methamphetamine, and have sent shivers down the spines of kidnappers in Davao City.
The first 3-6 months of his administration promises to be bloody as he doubles the salary of the police and the military, to motivate them to go all out against the enemies of our society today, which include the corrupt drug and kidnapping syndicate in the top echelons of the police hierarchy itself, and the entire bureaucracy.
He had warned all three police generals currently engaged in illegal drugs to retire early before he gets elected. This he did while reassuring everyone that he doesn’t need a police state, or martial law, to change and improve the peace and order situation in the largest city of Davao.
Alongside his crackdown on drugs, criminality and corruption, he will also convene constitutionalist to study the shift to federal parliamentary as a way of forcing economic development to the countryside, and to rectify the 100 year old economic injustice against the Mindanaoans in the South.
These unorthodox policies may turn out to be what this country needs as the age old “trickle down” economic policies of the government turned out to be just a cheap charade.
Today, a sizable 67% of our national budget is allocated exclusively for Metro Manila development, and the rest of the country will have to contend themselves with the remaining 33%. The discrepancies can easily be illustrated by realizing that about 54% of the government’s income through export comes from Mindanao, where Duterte hails from.
This fundamental problem has been highlighted very recently when groups of farmers were massacred while asking for 15,000 sacks of rice promised to them at the beginning of the year by the government to mitigate the effects of the massive drought in the country.

https://www.youtube.com/watch?v=m1erhNza-x8
Even the mainstream media were wondering where the president was at the time when farmers were peppered with M16 bullets, a full 3 days of official disappearance, proving once again that he indeed is the most stupid Philippine president so far.

Or, maybe he’s just being consistent with his family’s oligarchic tradition [here].
The exclusive economic development of Metro Manila, which encouraged most companies and government agencies to be headquartered at the capital, have resulted to overpopulation, heavy traffic and extreme pollution, such that no amount of urban planning and continued development could change the deteriorating situation.
To put it simply, the superiority complex of Metro Manilans is hurting them, too, and nobody from the elitist candidates have shown any resolve beyond motherhood statements, nor the relevant experience of handling an emergency like the worsening conditions of the people.
In deep contrast, as one businessman put it, “it was hell until Duterte came to Davao,” a city 3 times larger than Metro Manila.

The only stable source of income right now comes from the overseas workers who consistently contribute $25 billion annually to the national coffers. This is equivalent to the other 50% of our total annual budget. So, it really boggles the mind how the Oligarchy was allowed to have its way when it has not contributed anything to the real economy.
The keys lie undoubtedly in their ability to control the national conversation through the mass media and the 400-year old infusion of passivity by the Vatican Church.
The social media, and the internet at large, is changing that.
With barely 27 days to D-Day, the latest poll surveys cannot be manipulated anymore. Their own SWS survey indicates a 4% lead for Duterte over American citizen Grace Poe, which is too conservative compared to MBC-DZRH survey where the former garnered 36%, while the latter got only 28.2% [here].
Even the initial absentee voting exit poll shows 83% for Duterte. Absentee voting for our overseas workers will last 30 days, from April 9th to May 9th, i.e. Election Day.
One thing that is turning alarm bells on in the halls of power is that his presidency is expected to be incorruptible as even in the heat of their respective campaigns, no adversary has ever come up with proof, nor raise the issue, that he has dipped his hands in the cookie jar for the last 22 years he’s been the mayor of Davao City.
So that, it didn’t surprise us a bit when the seemingly remorseful CIA installed, Carlyle consultant, ex-President Ramos became one of those who convinced Duterte to run this time around.
Just like we said earlier, the ongoing people’s campaign to defeat the Aquino-Cojuangco-Lopez Olligarchy through the Duterte candidacy is the closest thing to an armed revolution.

The best thing about the Duterte phenomenon is that it has inspired the people to do the seemingly impossible, i.e.  to aim for a full industrialization of the entire country. This will be the first time that all sectors are expected to unite for a more meaningful nation building.
But whether the Western Oligarchy will interfere with our desire to prosper, or not, is still a big question. They have killed a pro-poor sitting president before, in 1957. They will do it again.
They have started already.