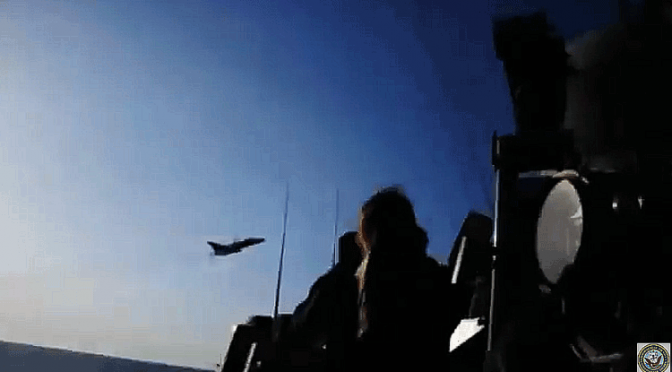 More than a year ago, the same US warship instigated a firefight with the Russians by conducting naval exercise in the Black Sea, where unarmed Sukhoi warplanes disabled the Aegis Missile System on the warship causing the crew to disembark at the nearest port.
It happened again, this time in the Baltic Sea.


In one of the most aggressive actions in recent memory, Russian warplanes conducted “simulated attacks” on the a U.S. Navy vessel in the Baltic Sea on Tuesday, repeatedly flying within 30 feet of the ship, according to a defense official.
Sailors aboard the destroyer Donald Cook said the aircraft flew low enough to create wake in the sea waters surrounding the ship, and the ship’s commanding officer said the incident was “unsafe and unprofessional,” the defense official said.
“This was more aggressive than anything we’ve seen in some time,” according to the defense official, who spoke on condition of anonymity because U.S. officials have not officially disclosed the incidents.
Sailors aboard the ship described the Sukhoi Russian Su-24 as “wings clean,” meaning there were no visible bombs or armaments on the aircraft, the defense official said.
The nature of the overflight as a “simulated attack” may violate a 1973 treaty between the U.S. and Russia that specifically prohibits this type of maneuver, the defense official said.
The maneuver was one of several aggressive moves by Russian aircraft on Monday and Tuesday.
Shortly after leaving the Polish port of Gdynia, near Gdansk, on Monday, the Donald Cook at was sea in international waters conducting flight operations with a Polish helicopter, part of routine joint training exercises with the NATO ally.
During those flight operations, a Russian Sukhoi Su-24 combat aircraft appeared and conducted about 20 overflights, coming within 1,000 yards of the ship at an altitude of about 100 feet, the defense official said. In response, the commander of the Donald Cook suspended flight operations.

Russian Aerospace is testing if USS Donald Cook has upgraded its Aegis Missile Shield System. It looks like, it hasn’t yet.
Nevertheless, the ongoing battle for global control is reaching new levels as the fiat financial crash is proceeding undeterred.
Similar maneuvers were done by US naval strike group in the West Philippine Sea to provoke China which ended up its own humiliation after a Chinese sub appeared too close to them without prior detection.