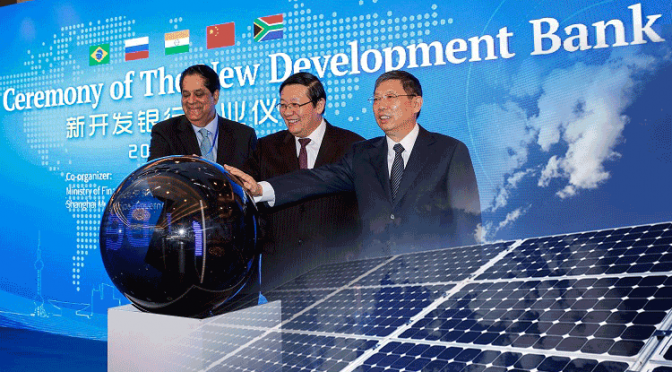 To underscore the BRICS’s fundamental goals of establishing three development banks to support its “One Belt, One Road” intercontinental economic initiatives, one of its banks, i.e.
the New Development Bank, approves loans for the first time, and these are for renewable energy projects in South Africa, Brazil, India and China.

The China-led New Silk Road and the Maritime Silk Road economic programs under the unifying banner of “One Belt, One Road” slogan, are supported by three development banks to date. These are the:

Each of these banks has at least $100 billion startup capital to satisfy the financing needs of the Eurasian regions.
BRICS bank approves first loans, $811mn investment in renewable energy projects

The BRICS New Development Bank (NDB) has approved its first package of loans worth some $811 million. The four projects in Brazil, China, South Africa and India are all in the renewal energy development sphere.
The decision to approve the first loans, which are to be handed out in tranches, was approved by the NDB at the board of governors on the sidelines of the International Monetary Fund (IMF) and the World Bank spring meetings in Washington DC, RIA reported.
The NDB decided to provide $300 million to Brazil, $81 million to China, $250 million to India and $180 million to South Africa. The bank estimates that the renewable energy field projects with a combined capacity of 2.37MW together can help reduce the amount of harmful emissions by 4 million tons annually.
“There are many more new projects in the pipeline including projects from Russia. They are at various stages of consideration or appraisal,” the NDB spokesperson said.
The ministers also discussed creating a credit rating agency of their own to tackle the western dominance in this sphere.
“Deliberations were held on efficacy of establishment of New Development Bank Institute and BRICS rating agency,” an Indian media release said. “It was decided that a technical working group would examine the issues in detail.”
The New Development Bank created by Brazil, Russia, India, China and South Africa started its operations in July, 2015, with initial authorized capital of $100 billion. The goals of the bank, headquartered in Shanghai, is to fund infrastructure projects in emerging economies for sustainable development.
https://www.rt.com/business/339797-ndb-first-project-loans/
For its part, India will use the NDB approved loan for deploying solar cell farms,

“Good news keeps coming for renewable energy in India, and today the source was a series of Tweets from India’s Secretary for Economic Affairs, Shaktikanta Das, who confirmed the large loan from the New Development Bank. It’s part of an ambitious strategy from Indian Prime Minister Narendra Modi to increase the country’s solar capacity to 100 GW by 2022.”

As many are already aware of, the IMF-World Bank financing backlog in the region is too high, on top of which is the unfavorable rules the region is being subjected to, i.e. these Western dominated banks are being used for geopolitical dictatorial objectives, most notorious of which is the exclusive veto rights of the United States.
Collective efforts by the BRICS are now being exerted to correct the imbalance,

“We need to take a united position on the quota reviews. Such reviews should in the first place be based on GDP figures, calculated by purchasing power parity (PPP)… Everyone has agreed to this,” said Russian Finance Minister Anton Siluanov on Thursday after a meeting with BRICS finance ministers.

According to the Russian Finance Minister, GDP is one of the key indicators, and its greater weight in the formula will take into account the interests of developing countries, which are now under-represented in the IMF, as their economies are developing dynamically.

The reform of IMF was adopted back in 2010, but was delayed until December 2015 due to the position of the US Congress, when it ratified the so-called 14th General Quota Review.

Under the new rules, China’s quota has reached 6.4 percent; Russia and India now have 2.7 percent each with Brazil and South Africa having 2.3 and 0.6 percent, respectively. This gives a total of 14.7 percent against 11.5 percent before. The US is the biggest member of the IMF and is the only one to have a veto, as 15 percent is a blocking share.

Now, the developing economies are looking to alter the formula of the quota. Some of them doubt that such indicators as openness and economic variability should play such a big role in the formula.

Establishing a parallel financial system [CIRP, gold-backed Yuan, own credit rating agencies], establishing new commercial sealanes like the Iranian Canal [here], revival of the ancient Silk Road [here, here], and defeating multiple attempts at starting a full blown nuclear exchange in Syria and Ukraine, are all forcing the West to play fair game with the East, and are primarily aimed at attenuating the undeserved geopolitical and financial power of the Khazarian Banking Cabal.

Already, several Western alternative pundits are now seeing their dire forecasts coming true. The Khazarian Federal Reserve is now in panic being caught in the proverbial choice between the devil and the deep blue sea as far as raising, or lowering its interest rates.
Negative interest rates, or bail-ins, or outright skimming on your bank deposit, are already being done, too, without your prior consent, of course.
May 28th is being pointed as the day the fiat dollar collapses.
Here’s a quick summary why…
https://www.youtube.com/watch?v=9Z5py1098RA
Superimposing the facts presented on the above video into China’s non-Rothschild Central Bank refusing to accept fiat dollar in exchange for its Yuan renminbi, then you get the full picture of what’s coming soon, unless the so-called distribution of humanitarian packages materialize beyond endless propaganda.