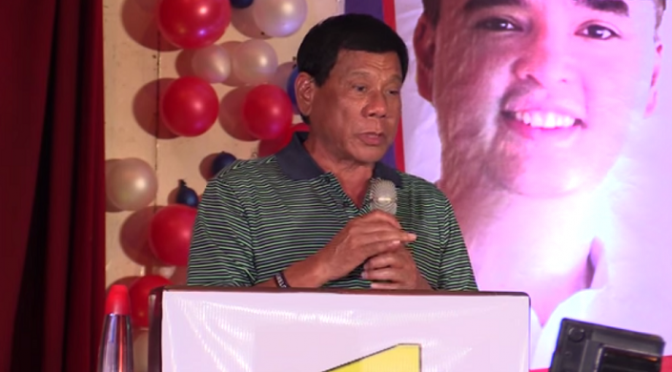 Duterte told both the US and Australian ambassadors to keep their mouth shut with regards to domestic political exercise that is getting hotter as the scorching summer sun.
The people here could not wait anymore for next month’s electoral exercise of casting their votes for the next 6-year term  president of the country.

Duterte’s falling out with US government goes a long way back when the “FBI spirited one Michael Terrence Meiring out of the city and the country without any approval from the Philippine government.”

Meiring was injured inside the Evergen Hotel here in Davao City in 2002 when there was an explosion inside his rented room. The following day, FBI agents took Meiring out of the hospital and brought him to Singapore before finally going back to America.

Duterte revealed that no less than the then US ambassador to the Philippines Francis Ricciardone flew in to the city early morning and met with him to express their concern on the Meiring incident.

“It was early in the morning when Ricciardone flew here and met with me in a hotel here. He assured me then that they will conduct an investigation regarding the Meiring incident. Yet since then, the US government failed to fully explain to me how come they violated our sovereign right to prosecute Meiring who committed a crime here in our city,” Duterte narrated.

Intelligence reports showed that Meiring was a CIA covert operative that had ties with the Muslim militants in the Philippines.

It was learned that Meiring had been renting the same room in Evergreen Hotel for five years and that he would not allow anybody to be cleaning the said room whenever he is away.

The explosion inside the hotel room happened in May 2002, and in March 2003 a bomb ripped thru the waiting shed of the old Davao International Airport which was followed a month later by another explosion in the Sasa wharf that resulted to the death of several people and the wounding of hundreds more.

“When a bomb exploded at the airport and followed by another explosion at the wharf several months after the hotel explosion that injured Meiring, that was when I started suspecting that the US could have had a hand in the said explosions. My suspicion was fueled when a military officer declared in public that the CIA have connections with known terror groups here,” Duterte said.

The twin bombings was however blamed on Muslim separatists members.

“It’s you guys (America) who have problem with Muslim radicals. We Filipinos don’t have a fight with our Muslim brothers here. Why do you have to drag us in?

That’s the reason why I don’t want any Balikatan exercise here,” Duterte said.

Both the local Oligarchy and US puppet masters are now panicking they might lose the Philippines on top of their losing grip on the entire resource-rich Asia as their own economy collapses.
They have all reasons to be. Just after the ambassadors made the undiplomatic comments…

Rodrigo Duterte jumped further ahead in the Philippine presidential race, according to a new poll taken after the tough talking Davao City mayor’s inflammatory comments over the 1989 rape and murder of an Australian missionary, as the campaign enters its last two weeks.

In the latest poll published by BusinessWorld and conducted by Social Weather Stations April 18 to April 20, Duterte led with 33 percent compared with 27 percent in SWS’s previous survey. Senator Grace Poe was in second with 24 percent, while Mar Roxas, the candidate backed by outgoing President Benigno Aquino, was third on 19 percent. Vice President Jejomar Binay fell to fourth with 14 percent. The election will be held on May 9.

They cannot help themselves but to interfere into the local politics as much as they can.

A FIRST-TIME Philippine senator and a former minister endorsed by the current president were selected by analysts as the most credible candidates in next month’s election to run the economy, according to a Bloomberg survey. Both are trailing in opinion polls.

Grace Poe, a senator and adopted daughter of a famous local actor, and former Interior Secretary Manuel A. Roxas II scored the highest support of the five main candidates in a confidence survey of 10 economists. Both ranked ahead of Rodrigo R. Duterte, the firebrand mayor of Davao City who is leading in the latest poll by Pulse Asia Research, Inc. to win the May 9 presidential vote.

How could a non-economist capitalizing on his adopted father’s movie screen name popularity be the best to run this country economically?
How could a man who panicked and visibly overwhelmed by the magnitude of the Yolanda [Typhoon Haiyan] carnage be allowed to run the country? He could not even make a proper accounting of where the Yolanda global relief donations went.
Who are these 10 economists pretending to know who should run our government and the economy?
How could they be an expert on other countries’ affairs, when even they could not even understand what’s really going on with their own country and its economy?
These self-proclaimed experts are just making themselves look stupid as much as the media parroting their views, when the people here are beginning to understand what the advertised positive GDP and economic growth is really all about, i.e.
it has nothing to do with the people’s purchasing power, nor the nation’s economic progress, but more about the 40 rich families’ bank accounts only.
… those same families who abuse the resources of the government and taxpayers money for their own selfish errands.

“Rarely would one witness such an awesome array of Philippine government air assets assembled at one time — not even during a disaster! Exhibited in a recent set of photos making the social media rounds is what seems to be an armada of no less than five helicopters escorting presidential sister Kris Aquino to a campaign sortie. The photos along with a video were allegedly “leaked” and uploaded onto Facebook.”

The people of my country cherish peaceful resolution to their political problems. For now, they are content with raising their fists.
https://www.youtube.com/watch?v=rTyJeJU7g0o
We have been very patient about US abuses in the country for a very long time. Persistent external interference is sure to backfire, which could trigger a more violent response one more time.

The offending party must learn how and when to stop meddling on other people’s affairs.