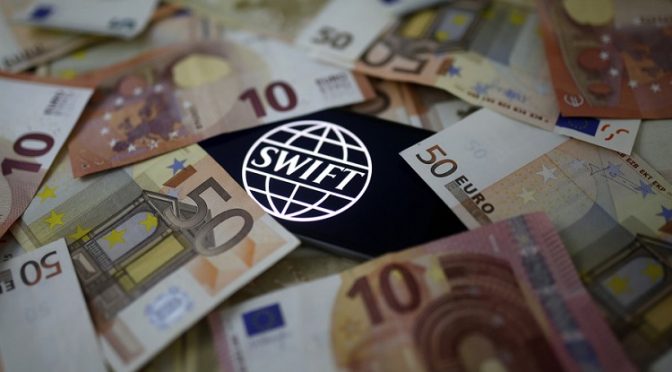 More than a month ago, hackers successfully looted a Bangladesh Federal Reserve account for $81 million dollars that were subsequently laundered in Philippine casinos prompting the authorities here to conduct an investigation.

So far, the scandal costs the resignations of RCBC treasurer and a bank branch manager, investigations are still going on, and the Bangladeshi government is yet to receive their funds through the bureaucratic procedures, while the hackers remain unidentified.
Beyond that, it must be understood that there is a very high probability that this hacking incident is not just an ordinary attempt to steal $1 billion funds from the Federal Reserve, but could be a part of a bigger plot to shut down the fiat banking system for good.
Whatever the case might be, it looks like hacking the Society for Worldwide Interbank Financial Telecommunication [SWIFT] is just a walk in the park.
Here’s why:

Hackers had an easy time stealing nearly $100 million from the New York Fed account of Bangladesh’s central bank because the Asian bank did not have a firewall, an investigator into one of the world’s biggest cyber-heists said on Friday.

Plus, the central bank used second-hand, $10 switches to network computers connected to the SWIFT global payment network — instead of sophisticated switches that would have cost just a couple of hundred dollars more, the investigator said.

The shortcomings made it easier for hackers to break into the system earlier this year and attempt to siphon off nearly $1 billion using the bank’s SWIFT credentials, said Mohammad Shah Alam, head of the Forensic Training Institute of the Bangladesh police criminal investigation department.

“It could be difficult to hack if there was a firewall,” Alam said.

The use of second-hand switches means it is difficult for investigators to figure out what the hackers did and where they might have been based, he added. The institute Alam heads includes a cybercrime division.

The police believe both the central bank and SWIFT should take the blame for the oversight, Alam said in an interview.

This latest high profile skimming on a bank account also exposes what could be a long inherent problem within the entire SWIFT system which they previously avoided disclosing.

“SWIFT is aware of a number of recent cyber incidents in which malicious insiders or external attackers have managed to submit SWIFT messages from financial institutions’ back-offices, PCs or workstations connected to their local interface to the SWIFT network,” the SWIFT group warned customers in a notice seen by Reuters.

The statement is the first time SWIFT has acknowledged there were other cyber incidents on its system, as well as the attack on the central bank of Bangladesh.

According to Reuters, SWIFT did not name any victims or disclose the value of any losses from the previously undisclosed attacks.

SWIFT has released a security update for the software that 11,000 financial institutions use to access its network, and has told customers the update should be installed by May 12.

Prior to this hacking expose, the BRICS collective were already exploring alternative to the SWIFT bank transfer system in a bid to insulate themselves from the fiat financial crash.

“… de-listing from the SWIFT network remains one of the primary financial weapons wielded by the US and its allies in their increasingly important financial warfare campaigns. In 2012, SWIFT agreed to de-list 30 Iranian financial institutions (including the central bank) from their network as part of the US/EU-led sanctions on Tehran, a move that was meant to stop billions of dollars’ worth of oil and export sales from being repatriated into the country and bring Iranian business to a standstill. Throughout the recent tensions between the US bloc and Russia over the civil war in Ukraine, the idea that SWIFT could similarly de-list Russian banks has been repeatedly floated as a potential next step for the US and its allies.”

…  Now it seems that talk is materializing into something very real. Called the China International Payment System, the CIPS network is meant to facilitate cross-border transactions specifically in yuan and the latest reports suggest that the system is already in place and could be launched as early as this September.

If and when CIPS is launched, the results could be world historical in nature. Firstly it provides the Kremlin and other US/EU/NATO/Israeli enemies a potential alternative safe haven from the crippling sanctions that hang over their head in the current environment. Secondly, it brings the yuan one step closer to being a fully-convertible currency, something that Beijing has been scrambling to achieve since the currency was rejected from the IMF’s SDR basket following the last reconsideration of that basket in 2010. And finally, it further solidifies China as the center of the worldwide “resistance bloc” to the current status quo.

Add this hacking event exposing SWIFT vulnerability to the recent Yuan Gold Fix, and the BRICS will surely get the desired results.

Again, we are imploring everyone to try exploring the principles being proposed by the Venus Project to end the use of money, and end war and politics as they are today.