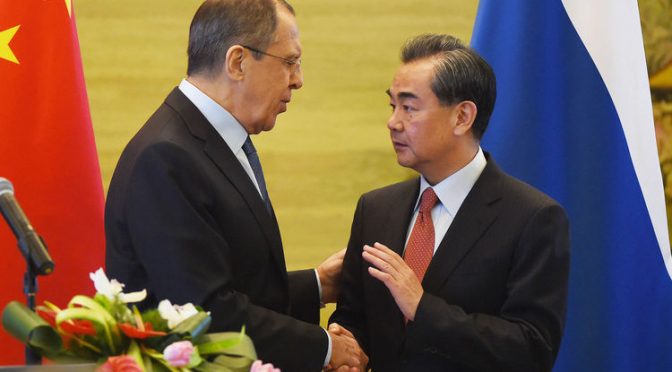 The movement of military pieces continue unabated outside borders of Russia and China.
US Strike Group is still in the vicinity of the West Philippine Sea, while aerial skirmishes were recorded over the Baltic Sea.

The shadow military war between the East and the West complements the financial war that has reached a new level post-2008 financial crash.
One of the most interesting developments is the recent move by Gulf Oil countries away from oil-based economy.

With the Yen and Yuan surging, it appears money is greatly rotating out of US dollars and into an ‘alternative’ currency as Gold soars over $1290.

These should affect the financial muscle of the Rockefeller and British factions of the Cabal, which should prevent them from buying off clandestine services against the BRICS Alliance.
On April 30, RT reported,

NATO is deploying an additional four battalions of 4,000 troops in Poland and the three Baltic States, according to a report citing US Deputy Secretary of Defense Robert Work.

Work confirmed the number of troops to be sent to the border with Russia, The Wall Street Journal reports. He said the reason for the deployment is Russia’s multiple snap military exercises near the Baltics States.
“The Russians have been doing a lot of snap exercises right up against the borders, with a lot of troops,” Work said as cited by the Wall Street Journal. “From our perspective, we could argue this is extraordinarily provocative behavior.”
https://www.rt.com/news/341470-nato-deployment-russian-border/

Previously, USS Donald Cook crew complained of being subjected to dangerous and unprofessional unarmed aerial maneuvers from Russian Aerospace. This was followed recently with the escorting of one US reconnaissance plane near Russian territory.

On April 14, a Russian Su-27 fighter jet performed a barrel roll maneuver over a U.S. Air Force RC-135 spy plane flying in international airspace over the Baltic Sea. Just three days earlier, two Russian Su-24 bombers flew dangerously and repeatedly close to a U.S. destroyer, also in the Baltic Sea. The most recent intercept came less than a week before the NATO-Russia Council is set to convene for the first time since 2014. Along with the fighting in Ukraine and Afghanistan, military transparency and risk reduction — timely and relevant topics given the interception incidents — will be up for discussion at the meeting.

Today, both Russia and China are now asking the US military to stop its plan of installing THAAD missile system in South Korea. This is part of the high stakes geopolitical game being played in the region in the ongoing battle for global control.

Russia offered support for China’s opposition to U.S. actions in two of Asia’s biggest security flash points amid mounting tensions on the Korean Peninsula and in the South China Sea.

Foreign ministers from China and Russia expressed “grave concern” about the possible U.S. deployment of the Thaad anti-missile system in South Korea to defend against the growing North Korean nuclear threat. Russia also backed China’s stance that non-claimants like the U.S. shouldn’t “interfere” in territorial disputes in the South China Sea.

The more than a thousand US military bases around the globe are now being systematically made obsolete by the growing advancements, logistical upgrades and security cooperation between Russian, ASEAN, Iranian, Indian and Chinese military organizations.

The combined movement of Gulf countries away from blood-soaked petrodollar and the close military cooperation between the BRICS, Iran and ASEAN military organizations should put the Khazarian Mafia on notice that at least 60% of the world are standing up against their continuing hegemonic ambitions.
It’s time for the people of the West to reciprocate the Eastern people’s progressive march towards global peace and prosperity for all, by removing the only criminal group that’s not willing to step aside as of yet.