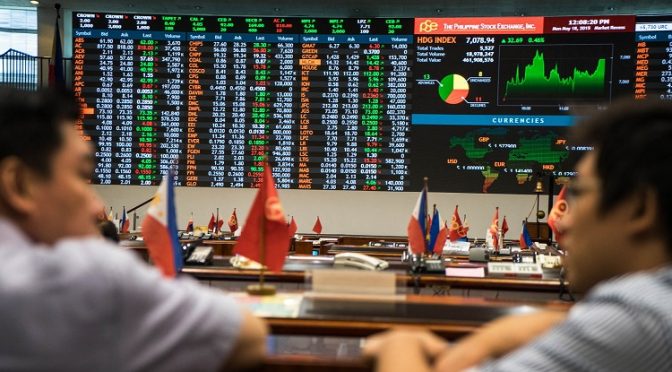 With barely 6 days to go before Philippine population go to the polls, the local Oligarchy and their counterparts in the US establishment are resorting to fearmongering about the economic uncertainty in the country.

Particularly, they are all blaming the current slide on the peso to the continued rise of Mayor Rodrigo Duterte in the most recent poll surveys.
This is what they do to cripple the economy of a nation on the brink of freeing itself from the clutches of the global financial cartel. 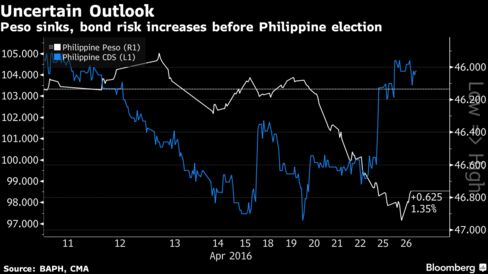 A controversial city mayor’s tightening grip on the Philippine presidential race has made the nation’s currency Asia’s worst performer this month.

The peso slumped 1.6 percent in April as opinion polls showed Rodrigo Duterte, the crime-busting leader of Davao city — who made inflammatory comments about rape and extra-judicial killing — extended his lead before the May 9 vote. He spent 22 years running the city of 1.5 million people and trailed his two closest rivals in a Bloomberg survey of economists on which candidate would best steer economic policy.

This grossly disconnected analysis has no bearing to the global financial realities where US dollar denominated economies are all experiencing a downturn due, among other economic factors, to the emerging new global currency gold backed Yuan which is not allowed to interact directly with fiat dollar, i.e. the economic uncertainly is a global phenomenon due to this East-West financial stalemate.
In particular, the recent market jitters are caused by the Bank of Japan, and not the fault of one man from Davao City. 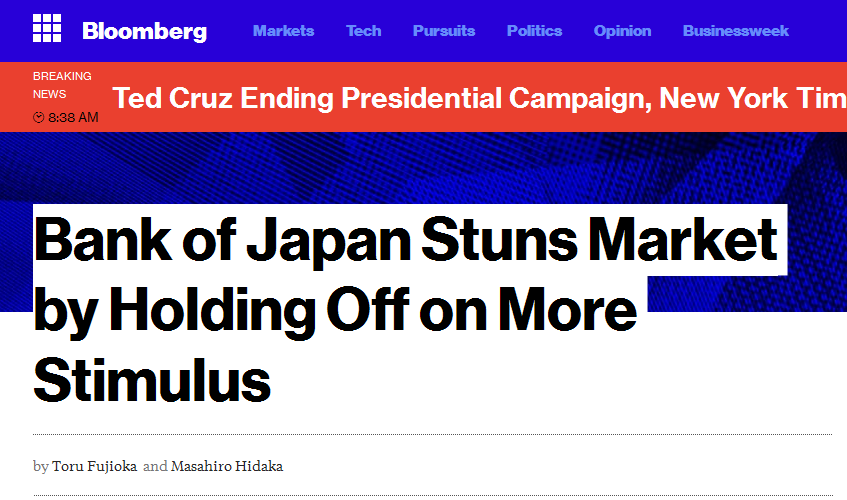 “The Bank of Japan held off on expanding monetary stimulus, as Governor Haruhiko Kuroda and his colleagues opted to take more time to assess the impact of negative interest rates.
The move comes as a surprise to the slight majority of economists surveyed by Bloomberg who had projected some action from the central bank in response to a strengthening in the yen that has cast a shadow over prospects for higher wages and investment. The currency rallied against the dollar immediately after the decision while stocks in Tokyo tumbled.
…The benchmark Topix stock index fell 3.2 percent. The banking sub-index slumped further, by 6.3 percent, following the lack of any move to help banks cope with negative interest rates. People familiar with talks at the central bank said earlier this month that BOJ officials may consider offering a negative rate on some loans to commercial lenders, without specifying a timeframe. No such move came Thursday.”
http://www.bloomberg.com/news/articles/2016-04-28/boj-holds-off-on-more-stimulus-to-gauge-impact-of-negative-rate
In short, Bloomberg is contradicting itself just to please Philippine Corporate Mafia.
The marching orders from the US embassy to the local mainstream media is to keep playing the “dark side of Duterte,” intelligence reports said, to sway the voters away from the outsider and reduce Duterte’s lead against Bloomberg’s preferred candidate, Americanized green card holder Grace Poe, or Mar Roxas, to enhance the massive cheating already in the works.
They are fully aware that with the actor’s adopted daughter, they can continue dictating the fate of the economy just like they are doing with the perpetually pliable BS Aquino, right now.

Grace Poe, a senator and adopted daughter of a famous local actor, and former Interior Secretary Mar Roxas scored the highest support of the five main candidates in a confidence survey of 10 economists. 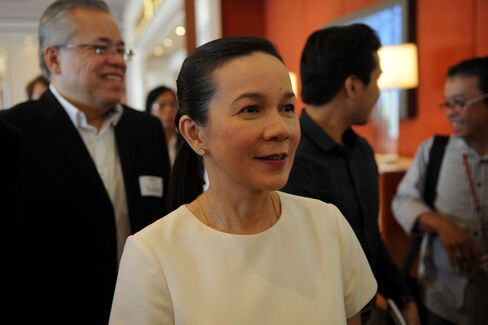 While all the contenders are championing reforms started by outgoing President Benigno Aquino to boost infrastructure and create more jobs, Poe and Roxas are viewed by economists as the most capable of delivering on their promises. At stake is an economy that’s been among the fastest growing in the world and a stock market that’s more than doubled since Aquino took office in 2010.

But the economic growth that they are talking about only serves the Corporatocracy through the 5-month labor contractualization avoiding all lawful benefits that every employer must give the workers.
This is what the Duterte presidency is seeking to eliminate on its first 3-6 months in office. 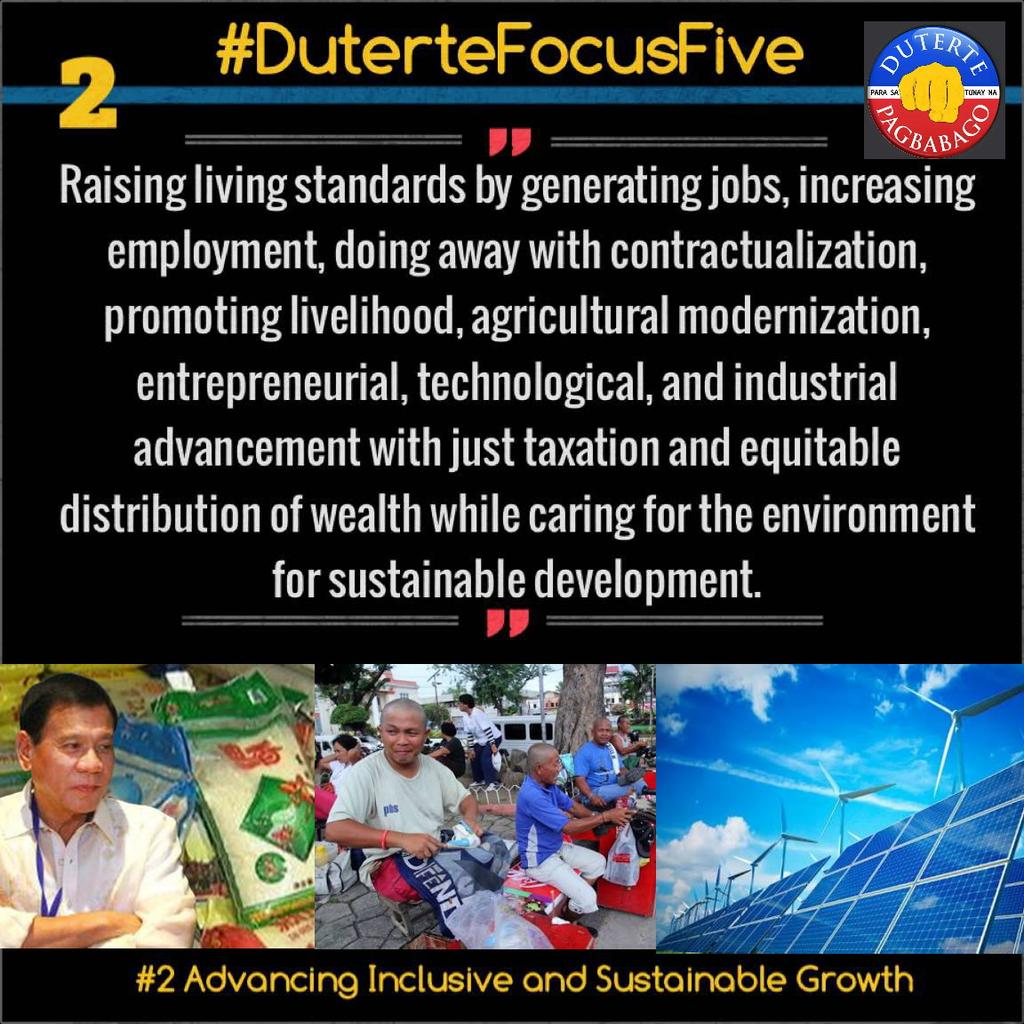 It is therefore grossly inaccurate that the Duterte presidency has no viable economic plan. The local Oligarchy, with the blessings of corporate US, Inc. just want to preserve the status quo, i.e. the continued enslavement of the people.

Philippine stocks fell the most since February after a poll showed tough-talking Davao City Mayor Rodrigo Duterte maintaining a comfortable lead a week before the presidential election.

Duterte had 33 percent support in the Pulse Asia for ABS-CBN survey that was released after the markets closed on Friday, followed by Senator Grace Poe with 22 percent. While he’s promised a “bloody war” on criminals, Duterte hasn’t given out much information on his wider agenda and his lead has contributed to the peso weakening the most in Asia in the past month. He ranked third, behind Mar Roxas and Poe, in a Bloomberg survey last month that asked analysts who was the best candidate to run the economy.

It is interesting to note that that particular survey was conducted by BMI Research, the same research outfit which came into a conclusion that,

Philippine presidential candidate Rodrigo Duterte’s election would have a significant impact on the telecoms sector. The pro-investment stance of the other leading candidate, Grace Poe, would also be positive for foreign investment and could accelerate growth in the telecoms market. However, entrenched barriers to entry through regulatory ambiguity and the duopolistic market structure will continue to pose significant hurdles to foreign investment. Duterte would be more likely to address these problems, owing to his hard line against corruption. 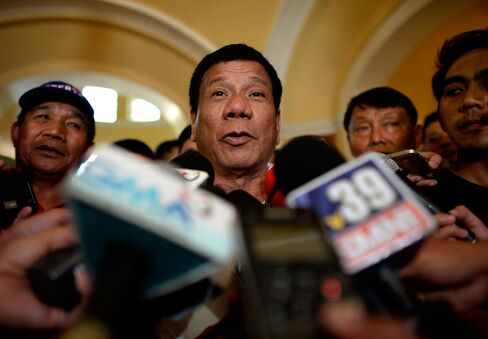 Favourable demographics and strong GDP growth inform our bullish view on the Philippine telecoms sector’s growth trajectory. Our Country Risk team estimates that 40% of the 100.7mn population was fewer than 18 years old in 2015, and forecasts real GDP growth to come in at 6.0% in 2016. These two factors will drive the adoption of advanced services, translating to sustained revenue growth for operators and positive spillover for the broader economy ( see ‘Potential For Higher Investment Rate To Sustain Economic Growth’, July 2 2015). The two candidates believed to be front-runners in the Philippines’ upcoming presidential election on May 9 – Grace Poe and Rodrigo Duterte – have taken on very different stances on tackling issues faced by the sector, particularly those pertaining to internet connectivity ( see ‘Presidential Election Update: Poe, Duterte Get Clear Of The Pack’, April 7). Leveraging our Country Risk team’s assessment of the duo, and the candidates’ proposed action plans, we believe that Duterte will have the best ability to improve the investment environment in the telecoms sector.

Recent exposes on campaign transport being provided by Danding Cojuangco of the stolen P70 Billion coco levy fame, put Grace Poe on the same league as BS Aquino, a nephew of Cojuangco.

As an aside, Danding Cojuangco has been tagged by the incarcerated assassins as the mastermind behind the assassination of Ninoy Aquino, the late father of the incumbent president BS Aquino, which should explain why even with two Aquino administrations, the Ninoy Aquino assassination, which led to the downfall of the Marcos dictatorship, remain unsolved.

Cojuangco is one of the cronies of Marcos. Yes, Cojuangco betrayed Marcos in favor of the US CIA, and the local Oligarchy are killing each other, too.

In addition to the above Game of Thrones playbook, Grace Poe’s father actor Fernando Poe, Jr., who actually won the 2004 presidential elections, was himself assassinated by the same Oligarchy while still protesting his presidency in the Electoral Tribunal.

The whistle blower who said this to the local media turned up dead days after.

Now, Grace Poe is allowing herself to be used by the same Oligarchical interests which allegedly murdered her adopted father. How ironic.

Aside from abolishing job contractualization, the Duterte presidency will also neutralize the age old “divide and conquer” strategy of the CIA through its low intensity conflict [LIC] where the New People’s Army continue to harass the countryside, and the secessionist Muslim groups and its ISIS affiliated Abu Sayaff terror group, through economic devolution away from Imperial manila via economic federalism [interim] and political Federalism [long-term]. 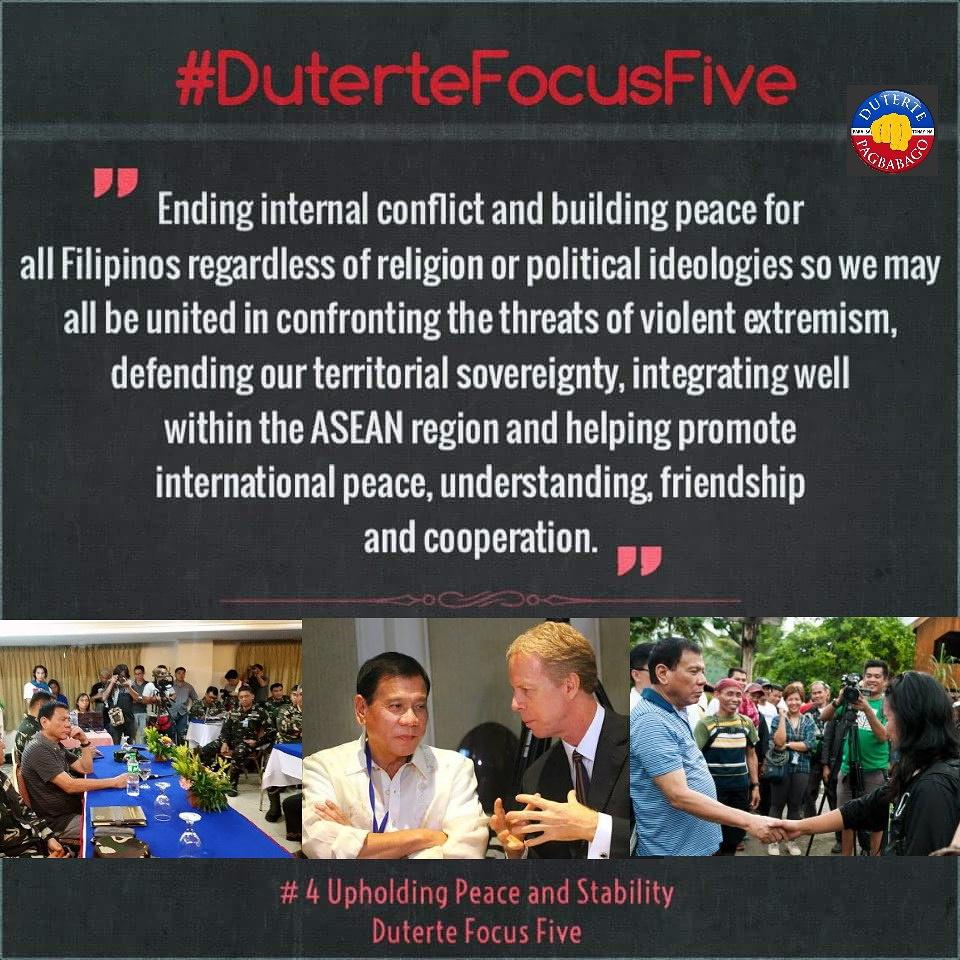 Considering the gains of the BRICS Alliance in establishing their own financial system, the greatest fear of a Duterte presidency for the Cabal is his plan to talk to China to settle the Spratlys conflict peacefully through joint resource explorations in exchange for Chinese financing of infrastructure development in the country, e.g. railways.
This Pivot to China has been done before by previous Gloria Arroyo administration through a collaboration to build WIMAX based broadband infrastructure throughout the archipelago, among other collaborations, but the local Oligarchy defeated it sensing that it would compete with their Smart Telecommunications and Globe ISP duopoly, with an expose of the ZTE broadband bribery.
Gloria Arroyo is now languishing in prison.
A Duterte-China collaboration therefore would not be a walk in the park for as long as the Cabalist Media and Oligarchy remains powerful. All government contracts should be as transparent as possible to avoid a potential false expose.
Credit:  Duterte Focus Five
Here’s why the Duterte Phenomenon is not something the West should mess up with:

I hate crime be it in corporate boardrooms or petty streets; I hate graft and corruption in politicians and private individuals because it’s evil. It’s the reason why am a DU30 fanatic, and is there any problem with it?

The Filipinos never had one because, if we have these values the nation won’t be where we are now, corrupt. If there are Christian values in the Filipino it would make Duterte obsolete, and be ignored.

Duterte is not only Digong, it is a movement, in fact, it is an organism where it has a life of its own to progress and development.
All provincial conventions were done by the local people without the presence of people (cadres) from Davao City. All groupings are autonomous. Funds are autonomously raised by the groups through contributions, selling old newspapers, bottles, tin cans, etc. In fact, poll watchers are told to bring their own baon.
Perhaps it will surprise Saul Alinsky of said organizing phenomenon.
It is a post-modern mix of everything crazy, bizarre, stupid, and yet sacred.
The spirit of the ‘movement’ I believe calls for a gradual change to free the individual from the oppressive laws and social constraints of the modern state.
Why Duterte?
As the whole country counts down to May 9, we face the strongest of possibilities that Duterte will be our next president and what that will mean for our country’s future.
If Duterte wins the election, his victory will be brought about by millions of Filipinos fed up with corruption at all levels of our society, and frustrated that the gains of the Aquino administration do not translate into their improved welfare and safety. The Duterte vote is the voice of angry Filipinos.
source