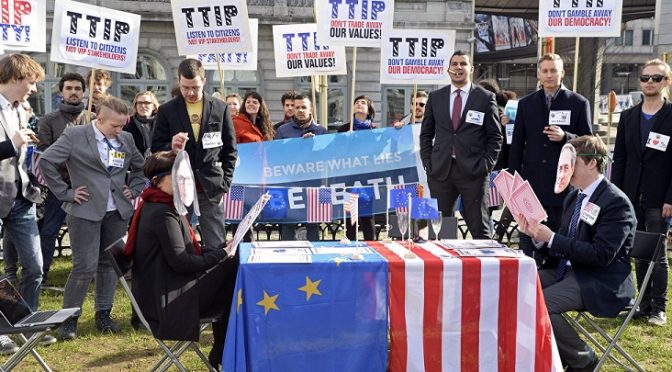 The shadow government hiding inside the Central Intelligence Agency that is responsible for the establishment of the European Union, and the White House is now blackmailing the EU to accept the Trans-Atlantic Trade and Investment Partnership agreement [TTIP], and to prevent a possible Brexit.

The US has mounted pressure on Brussels during recent talks on the Transatlantic Trade and Investment Partnership, the German newspaper Suddeutsche Zeitung reported.

According to leaked confidential documents, the EU would have to significantly decrease social, legal and environmental standards to open European markets for US-made products.

Washington is almost blackmailing the bloc to make concessions, the article read. For instance, the US has threatened to reduce imports of European cars if Brussels rejects to buy more US-made agricultural products.

What is more, according to the papers, the US plans to abandon the European principle according to which foods are free to sell only if they are safe for people and environment. As a result, genetically modified products and plants would enter the European market, the newspaper reported.

Here’s a snapshot of how Britain got into the European Union:

Evans-Pritchard writes, many Britons, and other Europeans, remain unaware of the declassified documents from the US State Department archives “showing that US intelligence funded the European movement secretly for decades, and worked aggressively behind the scenes to push Britain into the project.”

For instance, “one memorandum dated July 26, 1950, reveals a campaign to promote a full-fledged European parliament. It was signed by Gen William J Donovan, head of the American wartime Office of Strategic Services, [the] precursor of the Central Intelligence Agency.”

In fact, “the key CIA front was the American Committee for a United Europe (ACUE), chaired by Donovan. Another document shows that it provided 53.5 percent of the European movement’s funds in 1958. The board [of the ACUE] included Walter Bedell Smith and Allen Dulles, CIA directors in the fifties, and a caste of ex-OSS officials who moved in and out of the CIA.”

The archives, Evans-Pritchard adds, show that the CIA essentially “treated some of the EU’s ‘founding fathers’ as hired hands,” and even “actively prevented them [from] finding alternative funding that would have broken reliance on Washington.”

One thing that is universal in this whole social engineering scheme is to force peoples into a single geographical location and then stir conflict among them to divide and conquer them eventually. That’s the motive behind the forced integration of Middle Eastern refugees into Europe, i.e. to sow internal conflicts between peoples of different cultures to preoccupy them with perpetual ethnic and cultural conflicts.
The self-appointed Rulers of the World would never allow the peaceful interaction of different cultures through regular annual competitions while keeping themselves in their own countries for most of the year. They want to keep them in one geographical location so that they would kill each other in a culture shock.
Eventually, these different cultures will morph into a singularity that is fully submissive to the Architect of that One World Order.
We still prefer the potpourri of cultures and customs which made this world as colorful and wonderful as it should be.
The British should sever its connection to the EU to break the back of the Rothschild Khazarian Empire, and peace should be returned to the Middle East so that its people could return to its homeland and everybody could live in peace.
Death to the Global Corporatcracy!

9 thoughts on “Europe Under Attack By Shadow Government Proxies”