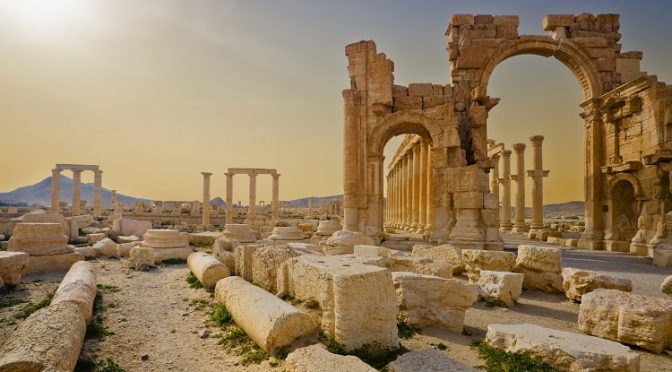 Syria is still battling terror in Raqqa while extending ceasefire with “moderate rebels” in Aleppo, but its partner Russia wanted to celebrate what has been gained so far in the old iconic City of Palmyra.

In the midst of the ruins of its cultural treasures,

A Russian symphony orchestra led by Valery Gergiev has given a unique performance in ancient Palmyra, recently liberated from Islamic State militants. The concert was devoted to the victims of extremists, and intends to instill hope that peace can triumph over war and terrorism.

The symphony orchestra concert was titled “Praying for Palmyra – Music revives ancient ruins” and was performed in the Roman Theater of Palmyra, one of the few sites still largely intact after Islamic State (IS, formerly ISIS/ISIL) captured the city. The venue served as the main site for the annual Palmyra festival prior to the terrorists’ rampage in the region.

ERBIL – Militants of the Islamic State (ISIS) executed a kid in Syria’s northeastern city of Raqqa, rights activists and eyewitnesses reported on Thursday.

ISIS has reportedly executed the child in the Naeem Square in the city of Raqqa, the main bastion of ISIS in Syria.

Speaking to ARA News in Raqqa, rights activist S.Y. said that ISIS terrorists have executed a 7-year-old child on Thursday in Syria’s eastern city of Raqqa on charges of ‘insulting divinity’.

“Islamic State’s police arrested the Muaz Hassan earlier this week in the city of Raqqa, after they heard him ‘cursing divinity’, while playing in the street with his friends,” the source quoted an ISIS member of Islamic Court as saying. “The act was considered an insult to the Caliphate, regardless of the age of the boy.”

An ISIS member of the Sharia Court read a statement before conducting the execution, explaining the reasons for his execution, eyewitnesses told ARA News.

The ISIS-led Sharia Court sentenced the victim to death on charges of ‘infidelity’, in a move contrary to every legitimate principle which says children are not held accountable for their acts, according to human rights activists.