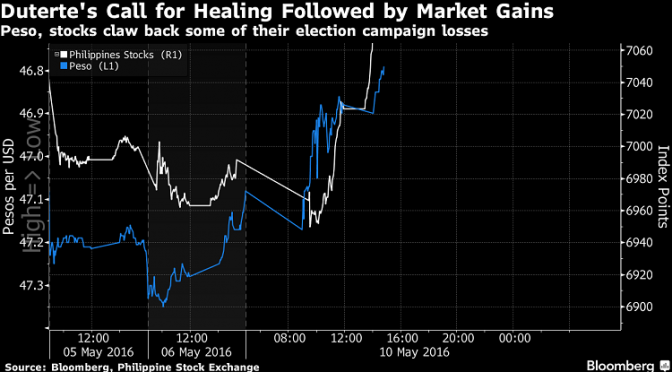 Cabalist mouthpiece Bloomberg made a turn around after it’s becoming clear that the anti-establishment candidate Rodrigo Duterte won yesterday’s elections, a landslide conclusion to a 4-month high octane campaign powered by the people themselves.

… F&H is optimistic about “the resilient consumer demand, the need for infrastructure improvement and the overall prospects of the Philippines’ economy in the future,” Simon Deng, the firm’s portfolio manager for Southeast Asia, said in an e-mail.

The Philippine peso rose the most in six weeks against the dollar as Rodrigo Duterte sought to ease investor concerns after claiming victory in the nation’s presidential election.

The currency also strengthened versus all of its 10 Asian peers as preliminary results showed Duterte, the tough-talking mayor of Davao city, won about 39 percent of the vote. He said on Monday it was time to start a process of “healing,” and named potential cabinet members. Uncertainty about his economic plans and lack of policy-making experience had sent investors to the sidelines in the weeks before the election. 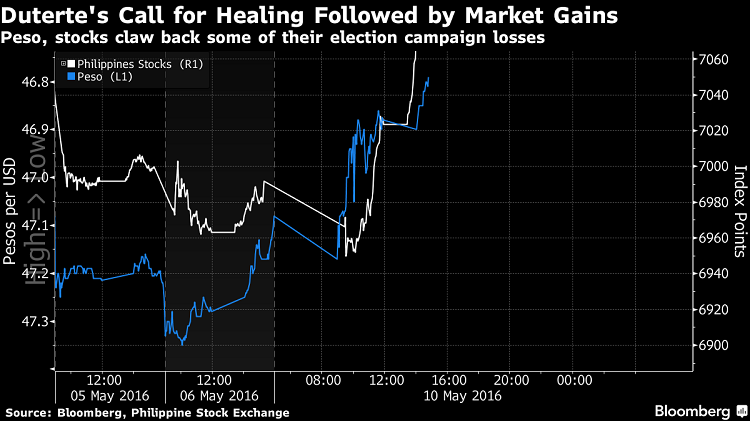 “A Duterte win had been flagged for some time now, and the market has already largely priced it in,” said Julian Wee, a senior market strategist at National Australia Bank Ltd. in Singapore. “Going forward, the market will be watching what Duterte does, and the initial signs are mildly positive in that he seems to be making some overtures to the other players in the political establishment. ”

The currency rose 0.7 percent to 46.77 per dollar as of 3:25 p.m. in Manila, after initially dropping as much as 0.3 percent from Friday’s close, prices from the Bankers Association of the Philippines show. The peso declined 1.8 percent in April in Asia’s worst performance. The Philippine Stock Exchange Index jumped 2.6 percent, the most since Jan. 27, ending a two-day drop. Local financial markets were shut on Monday.

The country’s dollar-denominated bonds due in 2041 advanced for a fourth day, sending the yield down three basis points to 3.26 percent, according to Bloomberg Bond Trader prices. Local-currency notes were steady, with the yield on the benchmark 10-year debt at 3.94 percent, prices compiled by Bloomberg show. It has risen 29 basis points from this year’s low of 3.65 percent on April 20.

Duterte told reporters he may appoint Carlos Dominguez, a former agriculture secretary to the late President Corazon Aquino, as finance or transport chief, and may turn to his running mate Alan Cayetano as foreign secretary. Dominguez owns a hotel and is Duterte’s childhood friend.

Once labeled Asia’s “sick man,” the nation of 101 million people has earned World Bank praise as the continent’s “rising tiger” under outgoing leader Benigno Aquino III, posting average annual growth of 6.2 percent over the past six years, the fastest pace since the 1970s.

“The business sector will also be anxious to see what policies Duterte has planned for the economy and investment,” NAB’s Wee said. “In the meantime, the market is likely to wait and watch, and we would expect that the dollar-peso would be fairly supported around current levels.”

Local businessmen also bared their reforms and Cabinet wish list for Duterte, among which are:

… the right environment for business and industry to function, it would be good for Duterte to signal what he prioritizes in the economic front.

The Makati Business Club who were covertly responsible for kicking out president Joseph Estrada in 2001 through a coup d’ etat for planning to implement a wide ranging cleanup of land titling in the country, which should have greatly affected the landed landgrabbing mestizos, is now testing the Duterte waters with some requests of their own.
The same article continues,

In a statement on Tuesday, the influential Makati Business Club (MBC) urged Filipinos to rally behind the country’s new set of leaders and help them in further boosting the economy.

“We call on all Filipinos to come together, to support our new leaders. Let us focus on those aspirations that unite us, rather than on the issues that divide us. After all, despite our divisions, we all aspire for the common goal of authentic freedom and inclusive development,” it said.

The MBC said that the Philippines “remains in a special spot with numerous positive forces converging in our favor” and “propelling the country to greater heights requires the cooperation of all sectors of society.”

“On the part of the business community, we welcome the clear mandate given our new leaders by our people and the credibility of the elections, and we stand ready to be an active and participative partner of government in ensuring sustainable and inclusive growth that benefits not just a select few but all Filipinos,” it said.

Sounds good right?
No.
After relinquishing power in 2010, Arroyo herself is now under hospital arrest for collaborating with China on many stalled projects including the installation of a nationwide broadband network which the MBC member Ayala of Globe Telecoms was wary about competing with.
Another notable project with Chinese financing is the NorthRail Project, said to be tainted with corruption, is now under Japanese support.
China is known for “going with the local flow” as far as international projects and investments are concerned.
This early, the local elite are requesting Duterte to “hear both sides” on labor contractualization.

Yao said Duterte should also get the side of businessmen before putting an end to contractual labor.

“He’s very aggressive about contractual labor and I think he will face resistance from the business side. He should hear both sides first,” Yao said.

Shortsightedness on the part of the egoistic Oligarchy is one of those ills they inflicted on our beautiful paradise. Their formula has always been to control critical utilities and charge shamelessly high monthly bills upon people that are barely surviving on meager salaries.
We hope Duterte has not forgotten the lessons of the past yet.

That’s Ayala of the local Oligarchy shaking Duterte’s hands during a conference where the latter was the guest of honor, days prior to the elections.