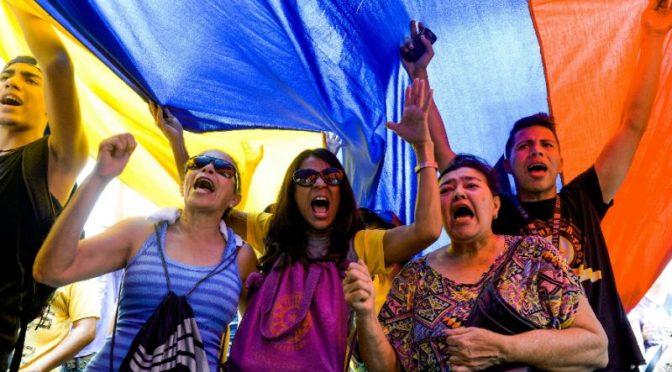 Saudi Arabia’s deliberate increase in oil production to plunge oil prices is not to deplete the Khazarian Mafia’s financial muscle as earlier reported but is actually aimed at undermining Russian economy to bring down Vladimir Putin.

However, the same weapon has also affected South American countries, most notably, Venezuela.
For several  months now, the Venezuelan oil dependent economy has to endure rising inflation, food shortages and power cuts, which encourage looting of food outlets and department stores.
How can an oil producing country have power cuts, too?
Leadership ignorance about alternative energy technologies is the prime reason why a country is so dependent on fossil fuels. After the Fukushima manmade disaster in 2011, the late Hugo Chaves abandoned the plan to build its first functioning nuclear power plant supposedly through the help of Russia.
Another factor  is the failure of the leadership to go full industrialization of the economy which should have prepared Venezuela from what’s happening right now.
Now, the country is teetering into chaos forcing President Maduro to declare a 60-day state of emergency to repel right wing opposition intent on toppling the government with the help of the usual suspects, i.e. Cabal globalists. 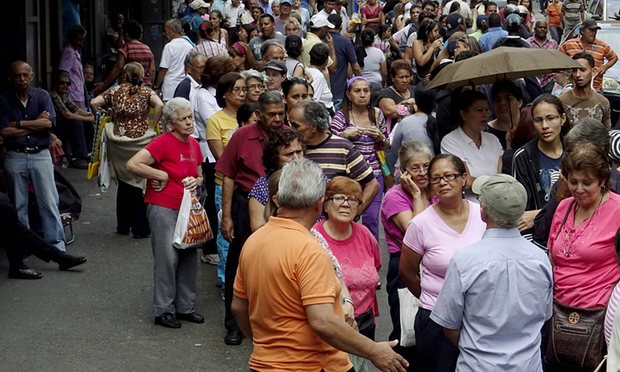 Venezuela’s president, Nicolás Maduro, has declared a state of emergency, hours after US intelligence officials warned that the South American country could be on the brink of disintegration.

The powers Maduro obtains after Friday night’s declaration allow him “to stabilise our country, and confront all the international and national threats against our fatherland in this moment”, the president said, but he did not detail how he intends to use them.

The country is grappling with soaring inflation, a shrinking economy, chronic food shortages, and power cuts so bad that public servants have been put on a two-day week and the president personally urged women to stop blow-drying their hair to save electricity.

At this time, the globalists are already celebrating what they  failed to do through a short-live coup against Chavez in 2002. With the successful toppling of the duly elected Roussef government in Brazil, Maduro is even more isolated.
One by one, South American countries crumble under the continued subscription to a fragile economic structure of interdependence and Babylonian monetary policies.

“You can hear the ice cracking. You know there’s a crisis coming. Our pressure on this isn’t going to resolve this issue,” one official told the news service.

“This is really not the case that the U.S. is rooting for any outcome other than there not be an economic meltdown or social violence,” another said. “There are reasons for concern that over the summer as Venezuela gives importance to payments on debt over imports that these events could spiral.”

“Maduro’s government has consistently paid its debt on time,” noted Reuters, “and has slammed market fears of a default as an international smear campaign.”

Back in 2014, the US Senate passed a bill citing “state-sponsored violence” as a pretext for economic sanctions against Venezuela which saw the freezing of assets and banning visas of Venezuelan officials, the usual geopolitical weapons used against countries who refused to bow down to their globalist whims.

“The US Senate has passed legislation that would direct President Barack Obama to levy sanctions against Venezuelan government officials or others accused of perpetrating acts of violence or human rights abuses of anti-government demonstrators.”

Now, it’s time for the mainstream media to capitalize on the ongoing collapse as the failure of socialism. Incidentally, we are moving towards that direction with the installation of four leftist cabinet members into the incoming Duterte presidency. We wonder how the US Cabalists would react.
Of course, putting too much emphasis on any particular ism would make us miss the point. Right character and adequate technical knowledge within the leadership which should result to an increased quality of life for everyone is primordial.
On the other hand, Western countries having stakes in the oil industry are not putting their eggs in one basket. They have also diversified into other energy technologies, so that they could be insulated from the use of oil prices as a major geopolitical weapon.
Germany has been producing energy from its solar and wind farms to the point of having more of it, its electric utility was forced to pay people just to use it.

On Sunday, May 8, Germany hit a new high in renewable energy generation. Thanks to a sunny and windy day, at one point around 1pm the country’s solar, wind, hydro and biomass plants were supplying about 55 GW of the 63 GW being consumed, or 87%.

They, too , have  food sources enough to feed their people.
On top of the corporate coup in Brazil, this developing event in Venezuela is another hard and painful lesson to learn for South America. The only redeeming fact in all of these  is that, at least the globalists don’t  see any need to kill Maduro as they did to Gaddafi.
The Cabalists need only to continue hyping up domestic dissent to bring down the Maduro government just like they just did to Rousseff in Brazil.
Fortunately for Russia, its leadership is not sleeping on the wheels. They have secured for themselves a strong domestic economy and a viable highly respected military organization that is able to project power outside of the federation.
In cooperation with China, Iran, ASEAN, and India, Russia is taking the moral high ground in standing up to the perpetual bully in the schoolyard. They are  now developing a method on how to effectively counter globalist color revolutions [here] around the world.
The hybrid WWW3 continues…