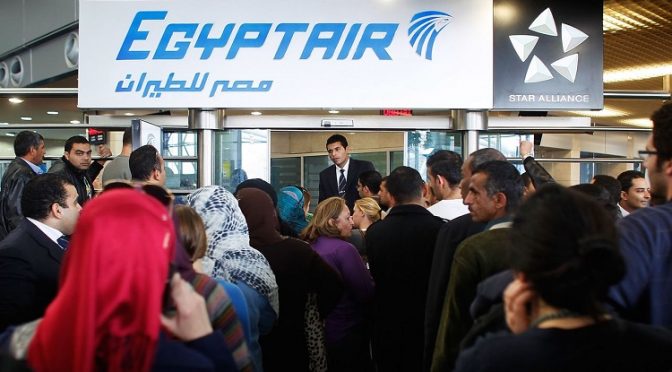 This is in deep contrast to Malaysian flight MH-17 that was brought down inside Ukrainian airspace, for which the White House and the media were in concert, and  quick in blaming the Russians with forensic evidence that were proven to be fabricated.
But they were quick at the very least. Now, they are mum about the incident, except the ISIS mainstream media. 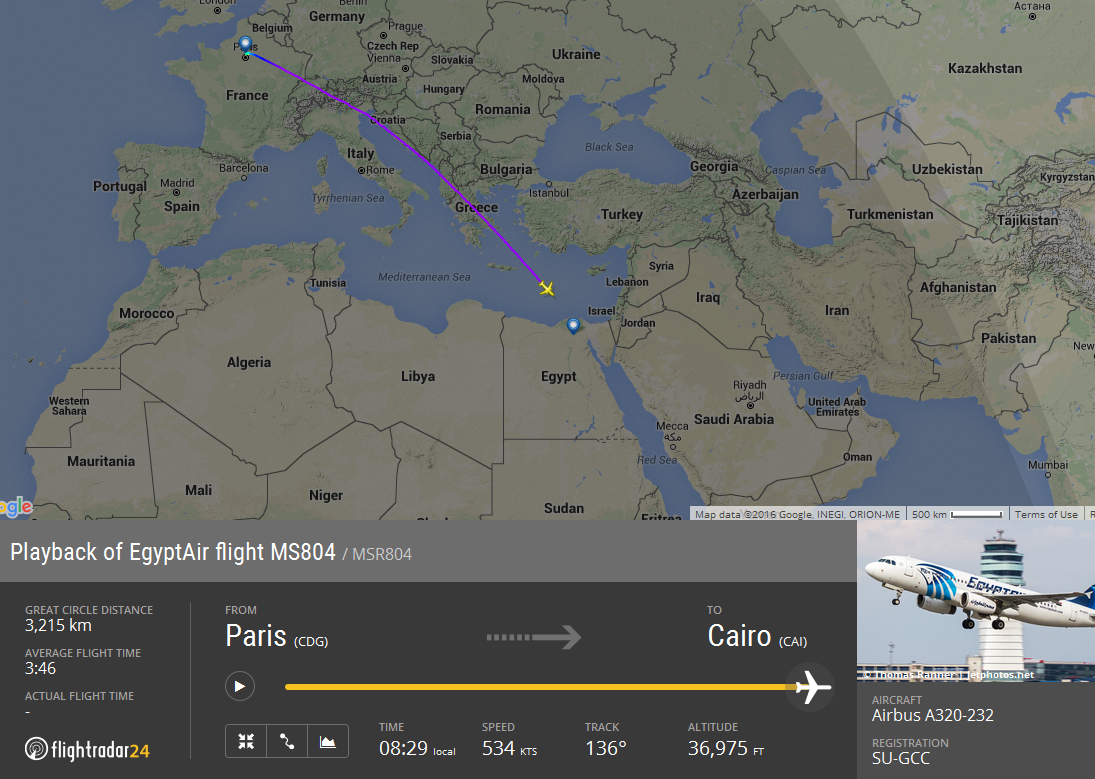 What we know about the journey of MS804

http://www.telegraph.co.uk/news/2016/05/19/egyptair-flight-ms804-disappears-what-we-know-so-far/
The strongest possible cause is the usual ISIS terror attack.
What is not clear, however, is where and when the actual bomb was planted as the plane was performing several flights within the 24 hour timeframe before its disappearance.
More importantly, before we pretend to solely blame ISIS on this one, we need to understand that ISIS is just another bogeyman that the Khazarian Mafia has assembled in the last four years or so, and is being used to inject terror anytime anywhere they want to.

“We know that Daesh is planning new attacks, using fighters in the area, taking routes which facilitate access to our territory, and that France is clearly targeted,” said the chief of the General Directorate for Internal Security, Patrick Calvar.

He made the remarks at a hearing before a parliamentary committee on national defense on May 10, a report on which was made public on Wednesday.

So, first they conditioned the public’s mind that terror is coming here soon, yet actually happens there, making the whole drama more unpredictable.
If that is the case, then the next question would be why would ISIS attack Egypt, or France by extension, at this time?
The basic objective of any terror attack is, of course, to sow terror and sustain fear to continue distracting us from many covert projects that are being laid out right in front of us, right now.
• Creeping Technocratic Dictatorship [here];
• Hillary Clinton’s continued hijacking of the Democratic Party’s primaries by saying it’s “already done” [here];
• Republicans’ ongoing acrobatics against the “outsider” Donald Trump, theater or not;
Both Republican and Democratic parties continue to grab attention away from the independent parties. So, it’s all theater.  You can disagree, by all means.
In deep contrast, Iceland just made history by pushing the Pirate Party to be the dominant political party in the country.. It would not surprise us if Iceland would be the first to implement the Open Source Government, too.
Their irresponsible bankers are still in jail. The Americans have yet to jail one.
So, again why would ISIS strike at Egypt at this point in time?
Today, Egypt and Russia just signed an agreement of establishing the first nuclear plant in Egypt. This is a very critical project aimed at enhancing its energy production. Egypt is currently consuming 80% of its own oil production for domestic purposes.
Nuclear technology, of course, is the closest thing to free energy and nuclear weaponry. In short, freedom from Khazarian tyranny.
The Khazarian Mafia wants to have that nuclear thing exclusively as much as possible., they have to kill more Egyptians to hammer that objective down President Sisi’s throat. But obviously, the ex-general is not backing down also.

“Russia has extended Egypt a $25-billion loan to finance the construction of the country’s first nuclear power plant, President Abdel-Fattah el-Sisi has said.

Sisi approved the agreement in a decree on Thursday, saying Moscow will cover 85% of the expenses and his government will provide the remaining 15%.

The plant, which is to house four 1,200-megawatt nuclear reactors, will be set up in Dabaa in northern Egypt. It is due to be completed in 2022 and possibly generate power in 2024.

Egypt and Russia signed the agreement in February 2015 but their relations were badly impacted after the horrific Russian passenger plane crash in Sinai last October, when all 224 people on board were killed.”

This Vladimir Putin really is one big Cabal spoiler, we should put more troops near the Russians’ borders.

STUTTGART, Germany — NATO is considering placing thousands of additional troops in Poland and the Baltic states, Defense Secretary Ashton B. Carter said Monday, adding that any new forces in the region would be rotational and part of an effort to deter future Russian aggression.

… The new NATO presence would be in addition to the recently formed Very High Readiness Joint Task Force. The task force, created last year, is composed of 5,000 troops from various NATO countries and is designed to act as a quick response unit for the alliance.

The bigger picture still is the ongoing collapse of the modern day Khazarian Empire known as the European Union [here], and their retaliation against the BRICS trough a corporate coup in Brazil.

Unseated Brazilian President Dilma Rousseff has spoken to RT in her first TV interview since being suspended from office by the country’s Senate. She says that the old Brazilian oligarchy is behind the impeachment process, and vows to fight the “coup.”

So, if they are successful in Brazil, why the need to drop another plane?
The covert WW3 is reaching a new level when the supposed BRICS ally, Pope Bergoglio, was put under intense pressure by Vatican Mafiosi angered by his banking and financial reforms. How appropriate would that be to bring down a civilian airliner just above the Vatican to force their globalist agenda?

In the final analysis, the EgyptAir flight MS804 forced disappearance is just another collateral murder as a direct result of Western population’s continued inaction against its own largest crime syndicate, i.e. Khazarian Mafia.
Street protests are not the decisive thing to do. Raising the pitchforks is. Otherwise, they will suffer more as the Technocratic Dictatorship is fully laid out.
Here’s one lone voice in the wilderness…
https://www.youtube.com/watch?v=4chuDGgSywA