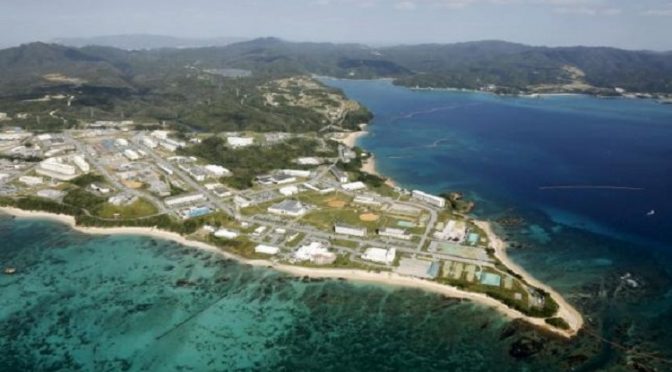 A US military base worker in Okinawa, Japan, has been arrested for killing and dumping a 20 year old woman that has spark widespread anger and renewed calls for the removal of the facility.

An American man working at a U.S. military base in Japan was arrested on Thursday on suspicion of dumping the body of a 20-year-old Japanese woman, police said, a case likely to stir anti-U.S. sentiment ahead of a visit by President Barack Obama.

The 32-year-old civilian working at the base on the island of Okinawa admitted to abandoning the corpse but did not make any comments about whether he had killed the woman, an Okinawa police spokesman said.

“I expressed a strong regret to Ambassador Kennedy and lodged a stern protest. I told her an incident like this is inexcusable and that I feel strong indignation,” Kishida told reporters.

This event will surely complicate the situation for Obama who will be attending the G7 Summit later this week, and was earlier prodded to issue an apology for the twin nuclear bombings of Nagasaki and Hiroshima, even after Japan had already made known its intention to surrender at the ending of World War 2.

US President Barack Obama says he will not apologize to Japan over the 1945 US atomic bombings of Hiroshima and Nagasaki, emphasizing that improving mutual ties will instead be the focus of his upcoming trip to the country.

This Friday, Obama will become the first sitting US president to ever tour the site of the world’s first nuclear bombing that killed more than 140,000 people in Hiroshima on August 6, 1945.

The attack was followed by another US atomic bombing on the port city of Nagasaki three days later, killing about 73,000 people.

When on Sunday, Japanese national broadcaster NHK asked Obama if an apology would be included in remarks he plans to make in Hiroshima, he said, “No, because I think that it’s important to recognize that in the midst of war, leaders make all kinds of decisions.”

Will the Nobel Peace laureate makes the same excuse not to apologize for the recent murder?

He knows this is not the first one.