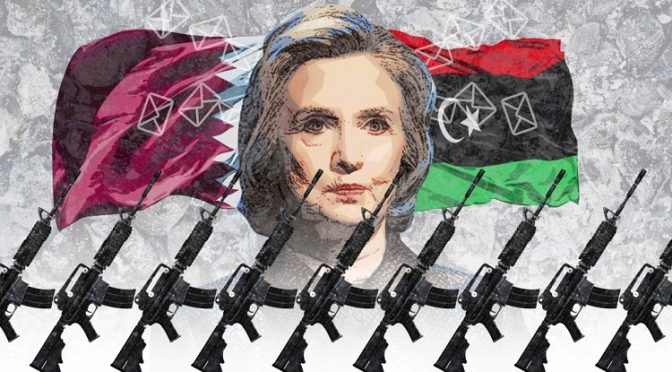 As we have already anticipated, Hillary Clinton will win the Democrat primaries over Bernie Sanders. And if somebody out there still thinking otherwise, or not to worry as Donald Trump will kick that witch out of the picture come November, that somebody is not paying attention hard enough.

According to a leak by Julian Assange, Google’s “The Groundwork” consultancy is working covertly with the Clinton presidential campaign to make sure that the entire Google Empire could turn the majority of the population connected to the Net to vote for the Khazarian Witch, and they would never even knew why.

The journalist behind the world’s most well-known whistleblower website appeared via videoconference at a session of ‘End of the Monopoly: The Open Information Age’, part of the ‘New Era of Journalism: Farewell to Mainstream international media’ forum organized at the Rossiya Segodnya International Multimedia Press Center in Moscow.

Assange is far from the only one to notice the link between Google and the Clinton campaign. Behavioral Psychologist Dr. Robert Epstein has pioneered research on how search engines affect elections and much more. He told Lee Camp, host of RT America’s ‘Redacted Tonight’, that “when one candidate is higher in search rankings ‒ that is, looks better than another candidate in search rankings ‒ that shifts a lot of votes to that candidate. And it’s not a tiny number. It’s a very, very big number of votes.”

Subliminal messaging has been proven to work over and over again. This is the fundamental basis of 32-second TV ads that create trust on a product. This is the technique being used when big news networks suddenly bombarded the airwaves with “Clinton is the presumptive Democratic nominee” earlier this week.

Optically induced trust is more than enough to extend their power for another 4 years, which in turn is enough to finish the groundwork for a fascist totalitarian technocratic dictatorship.

The Clinton presidency is expected to be extremely intolerant to any form of dissent and will be more than willing to go the extra mile in dealing with dissenters, as previous records about their handling of their own close aides have shown.

So, if Clinton is poised to win the November presidential elections, what would Americans do?

Autocrats won’t relinquish power for free. It must be taken away from them. But how can they do so when they deliberately limit their choices to those Rockefeller controlled Democrat and Republican parties only?

Americans need to grow some balls up and do what must be done. There’s still time.

Defeat Google and make alternative candidates popular on the ground. Defeat the social media bias by bombarding them with your own online campaign materials. That’s how we did it here in the Philippines.

But, the problem in America is multi fold. They have elected a good president once. His name was John F. Kennedy. He was assassinated by the CIA, with his own Secret Service driver delivering the fatal blow to the head, in broad daylight.
So, electing a good president is not enough. They must have a total systemic cleansing.
We really thought that the militia groups, and the active military will do that for them. After which, the likes of the Keenan Group can outgrow their own immaturity and forget about their ego, and refile the trillion dollar lawsuit against the bankers as they’ve been advertising they would do since 2011.
Otherwise, a second American revolution should be forthcoming.