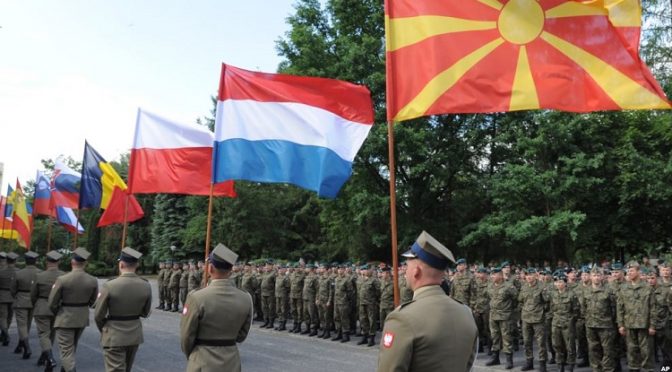 Over 31,000 NATO troops from 24 countries are conducting military drills in Poland to counter Russian’s growing military power and global influence.

They call the largest military maneuvers as Anaconda 2016. Yes, they love their serpent too much they even celebrated the recent completion of another serpent in Europe with bizarre display of horns and flesh.

The world’s longest tunnel, Gotthard Base tunnel, will slice 45 minutes off the journey between Zurich and Lugano. So, why are they still wanting a Cold War with Russia if they still value economic progress as the way to move forward?

In line with NATO anti-Russian propaganda, even a harmless submarine floating on international waters was sensationalized to enhance their own war rhetoric.

How did these people gone so low, they have to sacrifice their own sanity just so they could fool everyone?

Well, they have not fooled anyone, but themselves.

Solving conflicts with wars won’t work. We have a full century of experience that war does not necessarily result to peace, or “out of chaos, order.” There are far more wars today than before the United Nations was even established.

The source of problem can now be traced to only “62 people having more wealth than the poorest 3.6 billion people, whose goal is to maintain the position of disparity.”

This perpetual instigation for global conflict is the Oligarchy’s way of putting everyone on the edge, constantly, as a means of distraction as they continue to put in place a system that would ensure their full grip on humanity through the employment of technologies that could have enhance life if put to better use.

But the Select Few chose our total destruction instead. These are madmen steering humanity’s fate towards regression.

They are constantly creating enemies when there’s none. The BRICS’s peaceful approach in Syria and West Philippine Sea are being negated with agreements to rearm Japan,

“The deal that Tokyo has long resisted threatens to intensify regional tensions and may come at a big cost to American workers and the US military-industrial complex.

That effort has taken on a fever pitch in recent weeks, with the US regularly intervening in the Pacific to limit China’s claim to the contested Spratly and Paracel Islands in the South China Sea, flying routine surveillance missions at the edge of Beijing’s territorial waters, and teaming up with India and Japan for a provocative military exercise on China’s eastern flank.

President Barack Obama has even threatened to force through the controversial Trans-Pacific Partnership (TPP) trade agreement, largely reviled by working-class Americans as a global job-killing race-to-the-bottom program of deregulation akin to NAFTA, as the United States looks to buy influence from potential partners of an Asian counter-alliance to China even if it means outsourcing millions of jobs.

… and the US’s non-cooperation with Russia to recover Allepo and Raqqa from the Islamic State.

So what are we going to do?

Stop kidding yourselves. No periodic elections can bring them down. The whole geopolitical, financial and informational game is rigged.

What about those who are working behind the scenes to neutralize the Khazarian Mafia?

Why are these “honorable” shenanigans still breathing?

One day they said that the Rothschild extended family is already cooperating with the White Dragon Society, and then the next day, a bounty is raised against the Rothschild Kahazarian Mafia RKM heads, only to be withdrawn a couple of days later.

To escape from potential criticism, an alibi was then offered blaming the Cohen organization in New York as being the final obstacle to the planned “meritocratic global economic and ecological management system”, only to revert back to the “Rothschild Kahazarian mafia using delaying tactics” story.

What have you been smoking, Mr. Fulford?

… granted interview from his office in Beijing, China…

… and yet the White Dragon Ninjas could not locate and assassinate him?
Kind of hard to believe considering how these sneaky assassins eliminate their targets in Hollywood movies.

There’s now a growing street protest movement in France comparable to the Occupy Movement in the United States. But no matter how big the crowd is, the Oligarchy will never step down from their ivory towers. They only need to say that these protests are funded by George Soros, and everybody goes home.

What they’re doing deters our natural progression, and for that they are our real enemies.

They are the true enemies of humanity, and those groups, or individuals, who are pretending to be working for us are, by all indications, actually working for the same ruling class that has been calling all the shots for at least 500 years now.

Physical neutralization is the only way to go. Those who are saying otherwise, especially within the New Age movement, are part of the deception.
We need to be practical and decisive. The rotten must be discarded first before a real meaningful change can be realized.

6 thoughts on “Frantic NATO Ditch Sanity for Warmongering vs. BRICS”