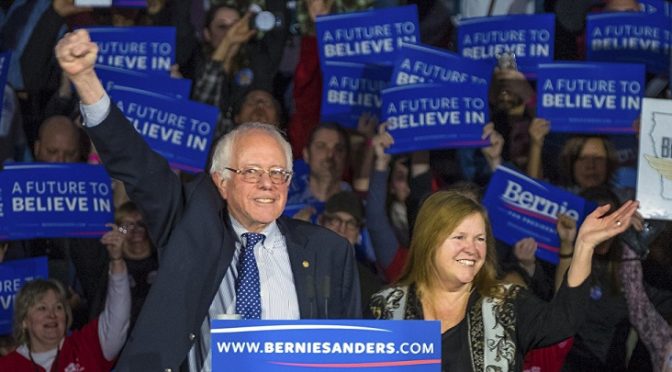 Bernie Sanders lost the unDemocratic nomination process even before it officially ended, in favor of the more ambitious cutthroat Hillary Clinton.
Both the mainstream media and the SuperDelegates made it sure that no socialist should ever challenge the Wall Street bankers’ grip on the ever generous US taxpayers.

But, his supporters are still very much in the game and want him to run as the third party candidate challenging both Clinton and Trump. Nobody ever heard of Jill Stein and the Green Party. Nevertheless, that’s should give people more choices. The more players, the merrier, they say.
But what if an unintended result could happen instead?
According the latest Morning Consult poll, at least 48% want him to continue campaigning and run as an independent candidate, something Obama would not agree on as he already endorsed Hillary as part of his commitment to the Bilderberg Club in 2008.

https://morningconsult.com/2016/06/10/bernie-sanders-drop-out-poll/
If Bernie Sanders decides to give in to the wishes of his supporters and those of the 48% surveyed voters, there will be a big possibility that the “protest vote” against the establishment will be divided amongst Sanders and Trump. That’s a very dangerous scenario because by then it would be so easy for Hillary Clinton to garner just enough votes to win the presidency.
Now, we are beginning to understand why they were moving heaven and hell just so they could put Hillary Clinton as the presumptive nominee long before the last primary vote was even counted.
And that the FBI’s constant threat of indictment against Clinton was just a ruse meant to deter everyone from pursuing their own action against the latter.
So, you see they are always two steps ahead of us, and the only way to defeat them is to cut off their limbs.
This highly probable outcome should be more than welcome by the Bilderberg Club members who are eagerly watching this spectacle from the sidelines, i.e. yet another round of that periodic renewal of the Sheeples’ faith to the illusory system they strongly believe is democracy.
Come this way, Sheeples. This is what’s good for you.

3 thoughts on “Bernie Sanders Running as 3rd Party Candidate, But…”