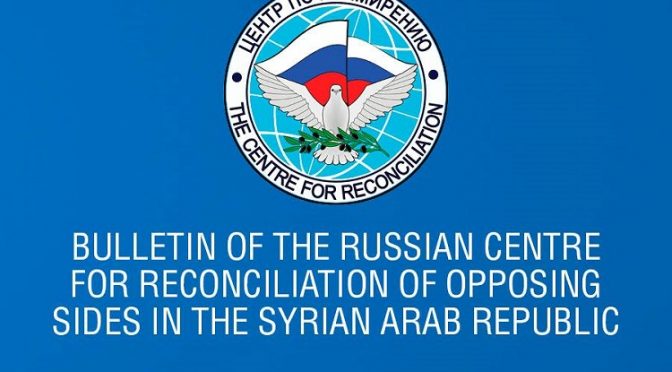 Russian MoD has acknowledged the major contributions of the Syrian Government to its brokered reconciliation initiatives with the various rebel factions across Syria, with the exception of those that the US classified as “moderate rebels” like Al-Nusra and Daesh ISIS.

To date, there are 146 inhabited villages whose leaders have signed reconciliation agreements with the Syrian government.
Here’s the latest bulletin from MoD:
Bulletin of the Russian Centre for reconciliation of opposing sides in the Syrian Arab Republic (June 13, 2016)
Reconciliation of the opposing sides
Within last 24 hours, a truce agreement with representatives of one inhabited area in the ‪#‎Aleppo‬ province has been achieved.
The total number of inhabited areas, the leaders of which had signed reconciliation agreements, has reached 146.
Negotiations on joining ceasefire regime have been continued with field commanders of armed opposition detachments active in the Aleppo, ‪#‎Hama‬ and ‪#‎Homs‬ provinces.
The number of ceasefire application forms signed with leaders of armed groupings has remained 60.
Results of ceasefire monitoring
The ceasefire has been observed in most provinces of the Syrian Arab Republic. Within last 24 hours, 5 ceasefire violations have been registered in the ‪#‎Damascus‬ province.
Jaysh al-Islam formations, which had claimed to belong to the opposition, have performed mortar shelling of positions of the Syrian Armed Forces in Arbil inhabited area twice and Harasta al-Bansal village for three times.
Russian Aerospace Forces and Syrian Air Force did not make strikes on opposition armed formations, which follow ceasefire regime and informed the Russian or American Centres for reconciliation about their location.
Humanitarian aid to the population of Syria
Humanitarian convoys for the population of Syria are being formed.
Citizens of Khmira inhabited area (Hama province) have received 4 tons of humanitarian cargos. Grains and flour are the basis of the cargos.
Aircraft of the Russian aviation company has dropped 18 tons of UN humanitarian cargos (food products, grains) on Deir ez-Zor, which had been besieged by ‪#‎ISIS‬ terrorists.
Additional information
“Silence regime”, which had been established until 12 p.m. June 14 in Darayya inhabited area (Damascus province), has been continued.
Within last 24 hours, Jabhat al-Nusra terrorists have performed shelling with improvised artillery systems against Ard al-Wata and Rasha (Latakia province), Blelije and Marj Sultan villages (Damascus province).
In the Aleppo province, Handrat and al-Ramusy inhabited areas, Sheikh Maqsood, al-Hamadiya, al-Khalidiah and Meidan quarters of Aleppo have been shelled with MLRS and mortars.
source »
The Russian surgical intervention continues in areas close to Allepo and Ragga cities…