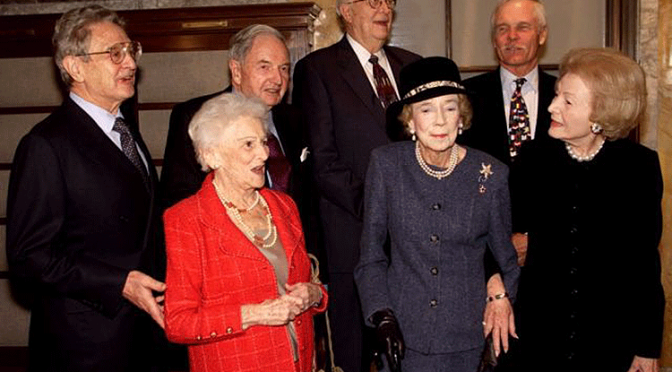 We believe that the UK Brexit is just a small yet very important step towards freedom from the SuperState European Union that is managed by non-elected Khazarian Nazionists.

If successful, the people still have to deal with the bogus Saxe-Coburg- Gotha UK monarchy.
Nevertheless, the big guns of the Khazarian Mafia are in full force in making statements aimed at sowing fear into the public who “will suffer from an immediate and dramatic impact on financial markets, investment, prices and jobs,” once the Brexit campaign succeeds.
These doom and gloom scenario is peddled on top of the recent false flag murder of a drugged man who, according to mainstream press, even shouted “Britain First” in reference to the “most radical” group among the Brexit campaigners.

Truth be told, most citizens of the corporate monarchy of the United Kingdom don’t have enough information about the true purpose of the European Union. This topic is summarily dismissed in the mainstream media as being just another conspiracy theory.
That’s why a mere statement of “economic consequences” from a George Soros is enough to tremble the hell out of them. According to him,

“As opinion polls on the referendum result fluctuate, I want to offer a clear set of facts, based on my six decades of experience in financial markets, to help voters understand the very real consequences of a vote to leave the EU.

The Bank of England, the Institute for Fiscal Studies and the IMF have assessed the long-term economic consequences of Brexit. They suggest an income loss of £3,000 to £5,000 annually per household – once the British economy settles down to its new steady-state five years or so after Brexit. But there are some more immediate financial consequences that have hardly been mentioned in the referendum debate.

To start off, sterling is almost certain to fall steeply and quickly if there is a vote to leave– even more so after yesterday’s rebound as markets reacted to the shift in opinion polls towards remain. “

Remember, this is just a poll which they control and not the actual voting sentiments. But they are now conditioning the mind of a failure for the Brexit.
Now, if that is true, why would the likes of Soros and his master issue statements urging the people against Brexit if indeed the Leave campaign is losing?

I would expect this devaluation to be bigger and more disruptive than the 15% devaluation that occurred in September 1992, when I was fortunate enough to make a substantial profit for my hedge fund investors, at the expense of the Bank of England and the British government.

It is reasonable to assume, given the expectations implied by the market pricing at present, that after a Brexit vote the pound would fall by at least 15% and possibly more than 20%, from its present level of $1.46 to below $1.15 (which would be between 25% and 30% below its pre-referendum trading range of $1.50 to $1.60). If sterling fell to this level, then ironically one pound would be worth about one euro – a method of “joining the euro” that nobody in Britain would want.

Brexiters seem to recognise that a sharp devaluation would be almost inevitable after Brexit, but argue that this would be healthy, despite the big losses of purchasing power for British households. In 1992 the devaluation actually proved very helpful to the British economy, and subsequently I was even praised for my role in helping to bring it about.

But I don’t think the 1992 experience would be repeated. That devaluation was healthy because the government was relieved of its obligation to “defend” an overvalued pound with damagingly high interest rates after the breakdown of the exchange rate mechanism. This time, a large devaluation would be much less benign than in 1992, for at least three reasons.

… Today, there are speculative forces in the markets much bigger and more powerful. And they will be eager to exploit any miscalculations by the British government or British voters. A vote for Brexit would make some people very rich – but most voters considerably poorer.

The logic being that he is the expert in currency manipulation and people should listen to him. Against that rationale is the Iceland experience when they severed their monetary policies away from the vulture bankers.
Once the initial disruptions are contained, the more independent economy will strengthen itself as the fundamentals are stabilized.
And he is not part of the “speculative forces” he is talking about, that “will be eager to exploit any miscalculations by the British government or British voters.”
Yes, he considers a vote for Brexit as a miscalculation, as if he is really good with math when even his rise to prominence in world finance is only by the virtue of his having privileged access to information within a system that has been rigged also by his cohorts.

The truth of the matter is, these Khazarian Mafiosi are afraid that the Brexit campaign might just win because their Brexit arguments are more level headed, and for the open minded that’s a positive way to move forward.
While the Remain campaign are dwelling mostly on pessimism as if the world would end with Brexit.
This Jacob Rothschild opinion piece came much earlier… 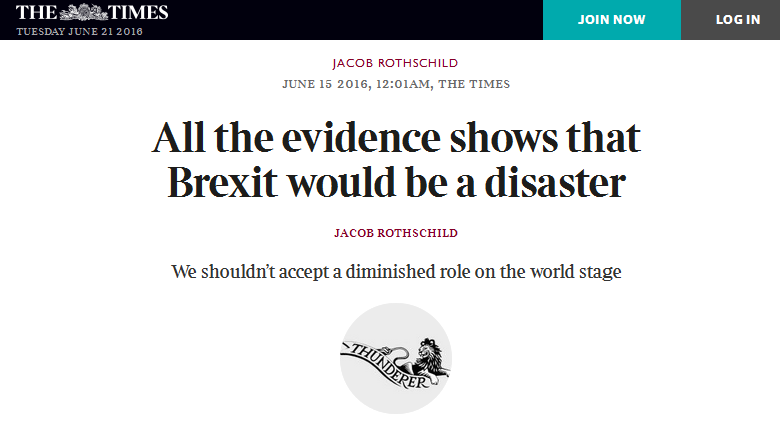 “Success stories in any field are built on one great idea. This was certainly the case with my forebear Mayer Amschel Rothschild, who at the end of the 18th century sent his five sons to the five financial capitals of Europe to set up the first truly international banking system, a “common market”. Operating from London, Paris, Vienna, Naples and Frankfurt, the brothers, working together to exchange information and ideas, built an extraordinary business that operated across boundaries and cultures.

A hundred and fifty years later, the foundation of the EEC operated on similar principles, namely that we are stronger…”

With reference to the article’s title, when does evidence come before the action, i.e. Brexit?
The key message right there is the statement “We shouldn’t accept a diminished role on the world stage,” which is not addressed at the great people of great Britain but could only mean that the Rothschild dynasty is not ready yet to have a “diminished role” on their lives.
Here’s the kicker: Great Britain was already great before the European Union came into being. Most of all, the EU is collapsing whether Bexit succeeds or not. The only difference is, with Remain, Britons will be at the front seat when it happens. This is the reason why the Rothschild camp is campaigning for Remain, for the UK taxpayers to absorb a major portion of the impact of the impending EU economic collapse.
To put it simply, the Rothschild dynasty is far more concerned on the accelerated collapse of their brainchild European Union through the Brexit, than being genuinely troubled over the fate of the UK.
Bear in mind, the collapse of these megacorporations  masquerading as government entities doesn’t necessarily mean the collapse of your ability to survive. In fact, your life would be a lot better without these bankers and their stooges in your midst.
So, while the Remain campaigners are focusing on fear and pessimism, the Leave campaign is straightforward in reminding that Britain will become great again, alone.

It would become even greater once the true blooded Britons kicked out their bogus and useless monarchy, together with the Rothschild banking system, after the Brexit.
Of course, that’s a tall order, but as we say here in Asia,
“A journey of a thousand miles, begins only with a single step.”
That single step, my British friends, is the Brexit.