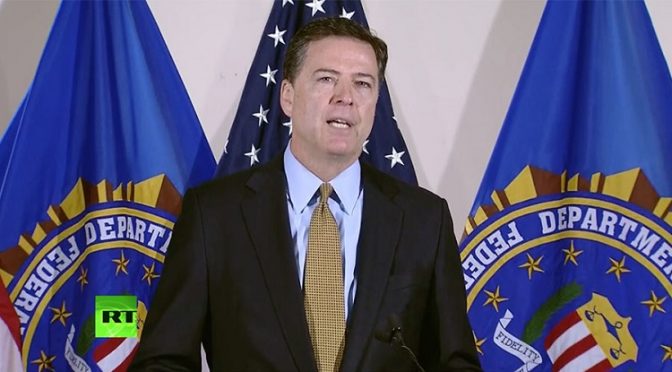 This is another sad day for America which only a day ago celebrated its “Independence Day.”
The Federal Bureau of Investigation just admitted that there’s nothing wrong with Hillary Clinton’s handling of state secrets through a separate email server, even if other countries were able to hack and penetrate it.

Though the FBI found that Hillary Clinton and her staff were “extremely careless” with State Department emails hosted on a private server, no criminal charges will be brought against the former secretary and current presidential candidate.

“No reasonable prosecutor” would bring criminal charges in this case, FBI Director James Comey told reporters Tuesday morning, after going into the details of the bureau’s two-year investigation, which he described as a “painstaking undertaking requiring thousands of hours of effort.”

“No reasonable prosecutor” would bring criminal charges in this case, FBI Director James Comey told reporters Tuesday morning, after going into the details of the bureau’s two-year investigation, which he described as a “painstaking undertaking requiring thousands of hours of effort.”

“Three of those were classified at the time,” he added.

Clinton used “several different server sand numerous mobile devices” to send and read emails on her personal domain during her tenure as secretary of state from 2009 to 2013, Comey explained. The FBI set out to investigate any intentional or grossly negligent handling of classified information, as well as whether any hostile actors gained access to the files, after the intelligence community Inspector-General requested a probe.

Of the 30,000 emails turned over to the State Department, the FBI found that 110 messages in 52 chains contained information that was classified at the time, of which eight were Top Secret, 36 were Secret and eight were Confidential. Another 2,000 messages were later deemed to have contained classified information based on their subject matter, in a process called “up-classification.”

At the same time, the FBI also warned others not to do the same because they will suffer the consequences.
Those earlier talks of FBI indictment against Clinton turned out to be a ruse. There are no FBI White Hats. There are only those who will try to delay the Second American Revolution.
We can think of only one reason why the FBI is siding with the Clinton Campaign. The FBI must be in bed with the Clintons’,…

… literally.
Do we need any more proof that the United States is nothing more than a vassal of the Khazarian fiat bankers and the military industrial complex?