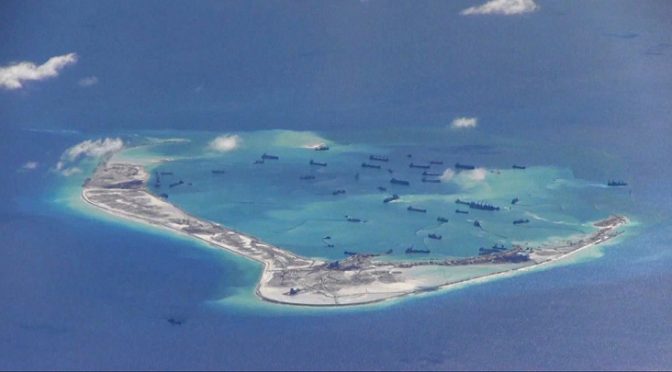 As expected, the UNCLOS Tribunal at The Hague ruled favorably to the case filed by the Philippines.
By extension,  the ruling also favors the geopolitical intentions of the United States in the region.

Incidentally, while the United States is citing legal issues against China, the former has not ratified the UNCLOS treaty yet.

“Every day, the New York Times has an interactive feature on its website. You can look at these Chinese islands they’re building in unbelievable detail, supplied by the United States military. But you’ve got to go outside the major media to see the 1,000 American bases ringing the globe.”

In the legal case against China, the United States cites the United Nations convention on the Law of the Sea. But the US has refused to ratify that agreement.

“Suddenly, the United States is standing on international law. It’s sheer opportunity, that’s all there is to it,” Lawrence says. “We [the US] have no grounds whatsoever. We surrendered all claims long, long ago to any prudence or rectitude in international law. We have nothing to stand on.

“I think the only people who are fooled by this are Americans.”

The Hageu tribunal found no legal basis for China to claim historic rights to resources within nine-dash line.

“The Tribunal concluded that there was no legal basis for China to claim historic rights within the sea areas falling within the ‘nine-dash line’,” the Hague-based Permanent Court of Arbitration said in a statement.

China has no historic title over water of South China sea, the Hagoue tribunal decided.

The newly installed Duterte government will review first the tribunal’s decision, but has expressed willingness to engage in bilateral talks with China.
He implored everyone not to flaunt any favorable verdict, but should rather use it as a leverage for the return of fishermen access to the area, among others.
Some backgrounders from The Guardian:
Why is that important?
Control of the South China Sea is the most contentious and explosive diplomatic issue in east Asia, with China asserting sovereignty over maritime areas that span 3.5m square kilometres but are also claimed by Vietnam, Taiwan, Malaysia, Brunei, the Philippines and Japan. Washington has become deeply involved, backing those against China and conducting military patrols.
Although the case was raised by the Philippines, it will affect all these countries as it questions the legality of China’s “nine-dash line”, a dotted marker in Chinese maps stretching hundreds of miles south and east from the mainland.
The South China Sea is thought to have significant oil and gas reserves and is a route for about $4.5tn (£3.4tn) in trade. There are giant fisheries and lanes for half of all commercial shipping. The Chinese president, Xi Jinping, has vowed to “resolutely defend” his country’s interests in the region.
The lead up to the ruling has been fraught. China’s foreign minister called the US secretary of state, John Kerry, by telephone last week and warned against moves that infringe on China’s sovereignty. And Beijing conducted military drills, deploying at least two guided missile destroyers and a missile frigate.
Bonnie Glaser, the director of the China Power Project at the Center for Strategic and International Studies (CSIS) thinktank in Washington, said a ruling that questioned or rejected China’s “nine-dash line” would not invalidate all of Beijing’s claims to land or maritime zones in the South China Sea. “[But] it would really limit the amount of water that the Chinese could have any legal sovereignty claim to.
“My sense is that their biggest fear is that there is an explicit finding that the ‘nine-dash line’ is contrary to international law. That is something that they just cannot not abide, that they could not accept. And that would be very difficult for them to manage going forward.”

From China mouthpiece Xinhuanet,
TOKYO, June 25 (Xinhua) — China always insists direct and peaceful negotiation with relevant countries to resolve the South China Sea issue, Chinese experts said on Friday at the Japan’s National Press Club.
Wu Shicun, president of China’s National Institute for South China Sea Studies, told a press conference that the core of the South China Sea issue is disputes over sovereignty and maritime administration of parts of Nan Sha Islands between China and other claimant countries.
He said China endeavors to maintain peace and stability in the South China Sea and calls for adherence to the principle of “putting aside disputes and seeking joint development” in the region.
Wu pointed out that the unilateral arbitration filed by the Philippines breaches consensuses reached by the Chinese and Philippine governments in the last century on the issue and the move is not aiming at resolving the disputes between the two sides, but making new troubles.
The South China Sea issue is not only a legal but a political one with historical and geopolitical factors, he said, adding that territorial disputes are not covered by the UN Convention on the Law of the Sea.
http://news.xinhuanet.com/english/2016-06/25/c_135465573.htm
China has refused to participate in the proceedings and declared that it will never recognize the verdict, stressing that the tribunal has no jurisdiction because the case is in essence related to territorial sovereignty and maritime delimitation.
Beijing has pointed out that territorial issues are not subject to the UN Convention on the Law of the Sea (UNCLOS), and that as early as in 2006 it declared — in line with UNCLOS — to exclude disputes concerning maritime delimitation from mandatory dispute-settlement procedures. Some 30 countries have also filed declarations of this kind.
… Although Manila asserted that its submissions do not concern territorial sovereignty or maritime delimitation, the Philippine Foreign Ministry, a day after launching the arbitration, described the purpose of the case as being to “protect our country’s territory and oceanic area” and vowed not to “give up our country’s sovereignty.”
Abraham Sofaer, a former legal adviser to the U.S. State Department, said last month that the tribunal’s ruling “will broadly undermine the potential utility of international adjudication.”
Meanwhile, Beijing, whose stance on the arbitration case has drawn support from more than 60 countries and international organizations, insists that the South China Sea issue should be resolved through negotiations and consultations between the directly involved parties.
Many in the Philippines share this view. Rosario Manalo, a former Philippine foreign affairs under-secretary for international economic relations, said the best thing for both the Philippines and China is to “sit down and talk.”
The country’s new President Rodrigo Duterte also said he will pursue bilateral talks with China, adding he might explore possible joint exploration in the disputed South China Sea.
http://news.xinhuanet.com/english/2016-07/12/c_135506930.htm
The full text of the UNCLOS decision is available at PCA, right here.
From the local Inquirer.net,
Below are five key points included in the summary statement released to the media

(1)Historic Rights and the ‘Nine-Dash Line’:
The Tribunal concluded that, to the extent China had historic rights to resources in the waters of the South China Sea, such rights were extinguished to the extent they were incompatible with the exclusive economic zones provided for in the Convention.
The Tribunal also noted that, although 2 Chinese navigators and fishermen, as well as those of other States, had historically made use of the islands in the South China Sea, there was no evidence that China had historically exercised exclusive control over the waters or their resources.
The Tribunal concluded that there was no legal basis for China to claim historic rights to resources within the sea areas falling within the ‘nine-dash line’.
(2)Status of Features:
The Tribunal noted that the reefs have been heavily modified by land reclamation and construction, recalled that the Convention classifies features on their natural condition, and relied on historical materials in evaluating the features.
The Tribunal found historical evidence to be more relevant and noted that the Spratly Islands were historically used by small groups of fishermen and that several Japanese fishing and guano mining enterprises were attempted.
The Tribunal concluded that such transient use does not constitute inhabitation by a stable community and that all of the historical economic activity had been extractive. Accordingly, the Tribunal concluded that none of the Spratly Islands is capable of generating extended maritime zones.
The Tribunal also held that the Spratly Islands cannot generate maritime zones collectively as a unit. Having found that none of the features claimed by China was capable of generating an exclusive economic zone, the Tribunal found that it could—without delimiting a boundary—declare that certain sea areas are within the exclusive economic zone of the Philippines, because those areas are not overlapped by any possible entitlement of China.
(3)Lawfulness of Chinese Actions:
Having found that certain areas are within the exclusive economic zone of the Philippines, the Tribunal found that China had violated the Philippines’ sovereign rights in its exclusive economic zone by (a) interfering with Philippine fishing and petroleum exploration, (b) constructing artificial islands and (c) failing to prevent Chinese fishermen from fishing in the zone.
The Tribunal also held that fishermen from the Philippines (like those from China) had traditional fishing rights at Scarborough Shoal and that China had interfered with these rights in restricting access.
The Tribunal further held that Chinese law enforcement vessels had unlawfully created a serious risk of collision when they physically obstructed Philippine vessels.
(4)Harm to Marine Environment:
The Tribunal considered the effect on the marine environment of China’s recent large-scale land reclamation and construction of artificial islands at seven features in the Spratly Islands and found that China had caused severe harm to the coral reef environment and violated its obligation to preserve and protect fragile ecosystems and the habitat of depleted, threatened, or endangered species.
The Tribunal also found that Chinese authorities were aware that Chinese fishermen have harvested endangered sea turtles, coral, and giant clams on a substantial scale in the South China Sea (using methods that inflict severe damage on the coral reef environment) and had not fulfilled their obligations to stop such activities
(5)Aggravation of Dispute:
Finally, the Tribunal considered whether China’s actions since the commencement of the arbitration had aggravated the dispute between the Parties.
The Tribunal found that it lacked jurisdiction to consider the implications of a stand-off between Philippine marines and Chinese naval and law enforcement vessels at Second Thomas Shoal, holding that this dispute involved military activities and was therefore excluded from compulsory settlement.
The Tribunal found, however, that China’s recent large-scale land reclamation and construction of artificial islands was incompatible with the obligations on a State during dispute resolution proceedings, insofar as China has inflicted irreparable harm to the marine environment, built a large artificial island in the Philippines’ exclusive economic zone, and destroyed evidence of the natural condition of features in the South China Sea that formed part of the Parties’ dispute.
http://globalnation.inquirer.net/140947/key-points-arbitral-tribunal-decision-verdict-award-philippines-china-maritime-dispute-unclos-arbitration-spratly-islands-scarborough

Again, while this decision is highly welcomed here in the country, the problem may arise if the Khazarian Mafia controlled United States decides to capitalize the UNCLOS decision even when it has not ratified the UNCLOS agreement itself, just for its own geopolitical ambitions.

5 thoughts on “Hague tribunal: None of the Spratly islands grant China an exclusive economic zone”