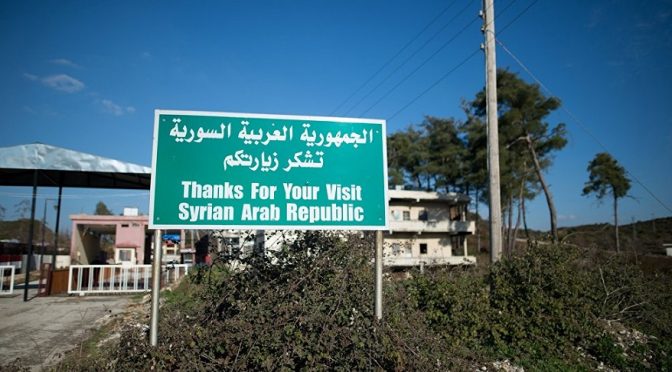 It’s confirmed: the United States is being checkmated in Syria and in Turkey. Now, Erdogan is set to visit Moscow early next month.
They will be talking about how to dispense with the CIA “moderate rebels” we know as Daesh Islamic State terrorists.

Sputnik reports,
Commenting on the results of the recent meeting on Syria in Geneva between Russia, the UN and the US and on the prospects of a possible ending of the Syrian war, Russian political expert Vyacheslav Matuzov suggests that much will now depend on the talks between Russia and Turkey: if they agree, the rebels and their US masters will lose the war.

“Turkish President Erdogan is set to visit Moscow on August 9. Prior to his meeting with President Putin there have already been a number of announcements on the joint economic projects and the readiness to open Turkey for Russian tourists,” Matuzov, former diplomat and an expert in Arab studies told Russia’s Izvestiya newspaper.

“This means that certain political agreements are also being prepared,” he added.

The political analyst further explained that first of all, it could be about closing the Turkish-Syrian border and, as a result, cutting-off of the influx of rebels and arms into war-torn Syria.

Matuzov suggested that the issue might have been already been agreed upon.

If the border is closed, the opposition and their American masters will lose the war in Syria.

In any further intra-Syrian talks, which could be scheduled at the end of August in Geneva, the US and their so-called allies will have no grounds to dictate any conditions.
This point of view has been echoed by Dr. Bassam Abu Abdallah, Director of the Center for Strategic Studies at Damascus University, who told the newspaper that Syria is not counting on the negotiations in Geneva, but rather on a rapprochement between Russia and Turkey.
“The Riyadh-formed High Negotiations Committee (HNC) is prone to US influence and the influence of the Middle Eastern states and is not acting in the interests of Syria,” he said.
While he does not expect any progress in the negotiations, the expert suggests that the failed coup attempt in Turkey will push Ankara to reconsider its foreign policy objectives.
The US has been accused of being behind the attempted military overthrow, he said. Washington is also for the further break up of Syria and for creating Kurdish autonomy.

All the above, he said, is unacceptable to Turkey, and so it will try to get closer to Russia and Iran and might make the decision to close its border with Syria which will result in a dramatic change in the balance of powers on the battlefield, he concluded.

Recent reports suggest that the next round of intra-Syrian talks could be scheduled for the end of August.
The Syrian government delegation, as well as three opposition groups — the Riyadh-formed HNC, the Moscow-Cairo and the Hmeymim groups — have been taking part in the UN-mediated Geneva talks on the peaceful settlement of the conflict.
The latest round of talks took place in Geneva on April 13-27. The HNC walked out of the negotiations, citing the continuous fighting in Syria and the lack of progress on humanitarian issues.
http://sputniknews.com/middleeast/20160728/1043718728/russia-turkey-syria-war.html
Both Russia and Syria are now conducting a large scale humanitarian operations after a successful establishment of humanitarian corridors for the civilians trapped inside Aleppo.

Russia and Syria are launching a large-scale humanitarian operation for Aleppo residents, Russia’s Defense Ministry said. Corridors for civilians and militants ready to lay down arms will be created to exit the city, which was Syria’s largest before the war.
“We have repeatedly called on the warring parties to reconcile, but the militants violated the silence mode each time, shelled villages, attacked the positions of government troops. As a result, a tough humanitarian situation has developed in the city of Aleppo and its suburbs,” Russian Defense Minister Sergey Shoigu said on Thursday.

“To assist civilians taken hostage by terrorists, as well as militants who chose to lay down their weapons, the Russian center for reconciliation of the warring parties, together with Syrian authorities, will open three humanitarian corridors there,” Shoigu added.
“I want to emphasize that we are taking this step, first and foremost, to ensure the safety of Aleppo residents,” the minister said. He has also urged international organizations to take part in the humanitarian operation in Aleppo.
According to the minister, the fourth corridor for the passage of fighters in Aleppo is being set up only because the US has not provided Russia with data on the al-Nusra Front terrorist group, which has recently been attempting to merge with other armed opposition groups in Syria.
https://www.rt.com/news/353678-russia-syria-aleppo-humanitarian/
Obama is also preventing another Saigon-like withdrawal from Afghanistan by not bringing all US soldiers home until he steps down from office.