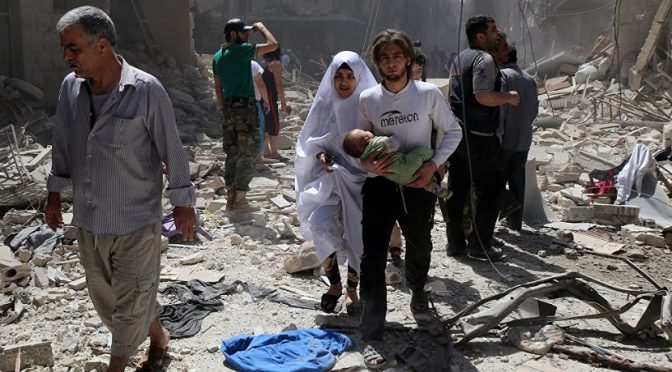 Finally, the first batch of Aleppo residents begun escaping from the ISIS occupied Syrian territory after all supply routes to and from Turkey are sealed off by Syrian and Russian forces.
Two days ago, thousands of leaflets were dropped inside Aleppo advising everyone about the proper way of approaching the humanitarian corridors.

Even those foreign backed militants who decided to lay down their arms and avail Assad’s amnesty program were allowed to pass through the same escape route.
Four more humanitarian corridors are to be opened along the perimeter of the beleaguered city.
https://www.youtube.com/watch?v=s63sLPyub_c
Russian and Syrian military are going to establish four more humanitarian corridors in the besieged city of Aleppo, in addition to three existing corridors that already helped hundreds to reach safety.
According to Lieutenant-General Sergey Chvarkov, the head Russian reconciliation center in Syria, four more humanitarian corridors will be established in the Syrian city of Aleppo in the near future by joint efforts of Russian and Syrian military forces.
“In addition to the existing corridors, we are organizing four more humanitarian corridors,” the general said.
Chvarkov said that the existing three corridors have already helped 169 civilians and 69 militants who chose to lay down arms, to escape the besieged city.
“In the areas of those humanitarian corridors we have equipped stations with hot food and medical assistance. The Syrian authorities have prepared six centers of humanitarian assistance, which can accommodate and satisfy needs of more than 3,000 people,” he stressed.
Russia has also prepared 14 tons of humanitarian cargo for those fleeing the militants, with 2.5 tons of food and essentials already supplied, he added.
According to the civilians who managed to reach safety, living under militants is horrible.
“We left with our remaining children. May God punish the rebels. They did not allow us to leave, they deprived us of gas, water, electricity and bread. We were not allowed to leave. There were no medicines. They used to tell us you live with us or die with us,” one of escaped women said.
“We suffered and walked a lot, may God curse the rebels. They did not leave food or medicine and by the time we left it was not easy,” another resident added.
Russian-Syrian humanitarian operation in Aleppo began on Thursday when three humanitarian corridors were opened in the city.
http://sputniknews.com/middleeast/20160731/1043797735/four-more-humanitarian-corridors-aleppo.html
While we can say that the US war freaks lost this one, they are still very successful in destroying a peaceful and progressive Syria like they have been doing in Libya, Iran Afghanistan and elsewhere.
Who’s going to pay for the failed US foreign policies, especially now that the US presidential election is only a choice between evils of differing magnitude?