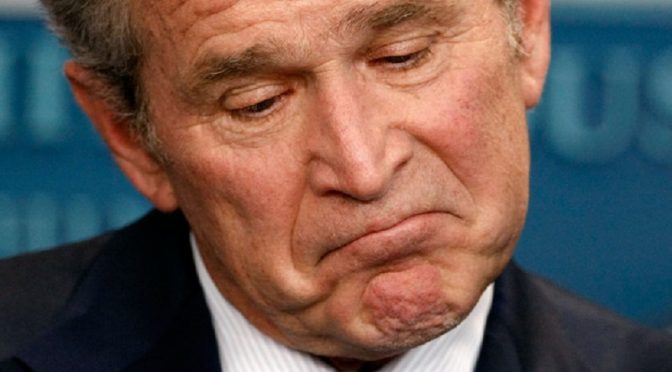 The United States Criminal Justice Department has refused the admittance of the Chilcot Report as part of the evidence supporting the lawsuit filed against retired Nazi President George Bush, Jr.

In papers filed Monday, August 1, 2016, the Department of Justice opposed the submission of the Chilcot Report to the United States Court of Appeal for the Ninth Circuit in an ongoing litigation related to the legality of the Iraq War.
The case, Saleh v. Bush, involves claims by an Iraqi single mother and refugee that six high ranking members of the Bush Administration — George W. Bush, Richard Cheney, Colin Powell, Donald Rumsfeld, Condoleezza Rice, and Paul Wolfowitz — waged a war of aggression against Iraq in 2003, and that they should be personally responsible for the consequences of the unlawful invasion.

Defendants Bush and Rumsfeld shake hands
The plaintiff, Sundus Shaker Saleh, alleges that high ranking Bush-Administration officials intentionally misled the American people by making untrue claims that Iraq was in league with Al Qaida and that Iraq possessed weapons of mass destruction. She also alleges that certain of the Defendants, and in particular, Donald Rumsfeld and Paul Wolfowitz, publically supported an invasion as early as 1998 and used 9/11 as an excuse to push for an invasion of Iraq, regardless of the consequences.
Ms. Saleh is relying on the judgments made by the Nuremberg war crimes tribunal convened in 1946, which found German leaders liable for unlawful wars of aggression against neighboring countries. The Nuremberg judgment held that committing a war of aggression was the “supreme international crime.”
The conclusions of the Chilcot Report were submitted to the Ninth Circuit as further evidence of wrongdoing by the six defendants in the case. Ms. Saleh also provided copies of notes and letters from former Prime Minister Tony Blair to George W. Bush included in the Chilcot Report, in which Mr. Blair appeared to commit to the invasion with Mr. Bush as early as October 2001.
In December 2014, the Northern District of California dismissed the lawsuit on the grounds that the Defendants were immune from further proceedings under the federal Westfall Act(codified in part at 28 U.S.C. §§ 2671, 2674, 2679).
The Westfall Act provides immunity to former government employees from civil lawsuits if a Court determines that the employees were acting with the lawful scope of their employment.
Ms. Saleh is urging the Ninth Circuit to overturn the finding of immunity made by the District Court and to permit her lawsuit to proceed before the District Court. http://www.globalresearch.ca/california-civil-law-suit-against-george-w-bush-et-al-doj-opposes-submission-of-chilcot-report/5539327
There wasn’t an indictment for Hillary Clinton even if she already admitted that her emails were hacked by Vladimir Putin.
Police brutality deserves no punishment even with presence of damning video evidence of the use of excessive force against unarmed, and disabled suspects.
If the justice system of a country is not working anymore, wouldn’t that qualify for a failed state status?

4 thoughts on “DOJ Blocks Submission of Chilcot Report in a Lawsuit vs. George Bush”