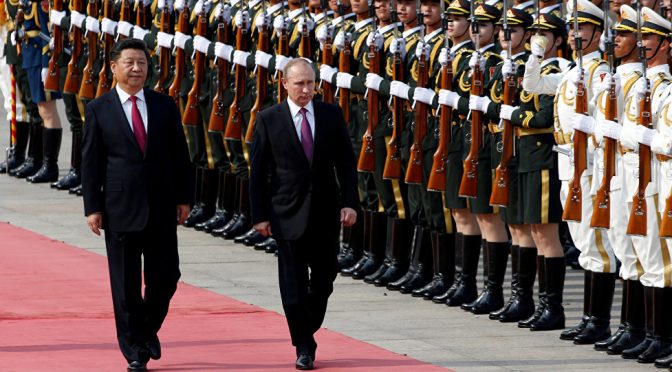 The United States installation of THAAD missile system in South Korea turned out to be the final nail to the coffin of the US-NATO world hegemony. It provided the pretext for a more aggressive China-Russia reaction to the US military provocations in the region.

Contrary to Western media claims, the THAAD installation in South Korea is not aimed at Pyongyang, but on China and the South Koreans are shaving their heads in protest. 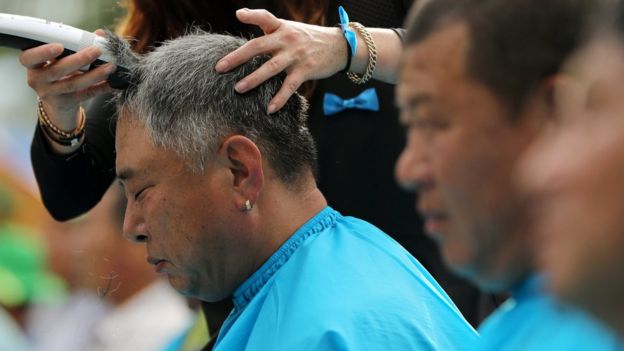 Russia-China Full Military Cooperation vs. NATO Formally Announced
The BRICS are not hiding their irritation over NATO warmongers anymore, they are now making their military intentions known, globally. As if we don’t know this already, but no less than Chinese President Xi jinping announced the formal military cooperation with Russia to create a new Russia-China World Order against the Khazarian NATO.
Chinese President XI Jinping in his speech on Friday the 1st of July, and republished in Chinese websites very recently, noted the strategic need for an alliance between Russia and China, which he believes will determine the future world order.

“The world is on the brink of radical changes. We see how the EU is gradually crumbling and the US economy is collapsing. This will end in a new world order. So, in 10 years we will have a new world order unlike anything before in which the key will be the Union of Russia and China,” said XI.

In his opinion the relations of Russia and China should not be confined to the economic relations, these countries should create an alternative military alliance.

“We are now witnessing the aggressive actions by the United States against Russia and China. I believe that Russia and China may form an alliance before which NATO will be powerless and it will put the end to the imperialist aspirations of the West,” he said.

The world order should be decided not by one country or a few, but by broad international agreement, said Xi Jinping, general secretary of the Communist Party of China Central Committee, on Friday.

“It’s for the people of all countries to decide through consultations what international order and global governance systems can benefit the world and people of all nations,” Xi said here at a rally marking the Party’s 95th founding anniversary.

“China will work with people of all countries to push the world order and global governance system toward a more just and reasonable direction,” he said.

China advocates that people of all countries join together to change pressure into power, risks into opportunities, and replace confrontation with cooperation and monopolies with win-win deals, said Xi.
China will always follow a path of peaceful development and an opening up policy featuring mutual benefit and win-win deals, he added.
The purpose of China’s foreign policy is safeguarding world peace and promoting common development, according to Xi.

“China is willing to expand common interests with other countries, build a new type of international relations with cooperation and mutual benefit as its core values,” said Xi.

The president noted China’s development of a more comprehensive model of international cooperation, such as the “Belt and Road” initiatives.

“We are not growing our sphere of influence, but supporting mutual development of all countries. We are not building our backyard garden, but a public garden for all countries,” he claimed.

“China advocates a community of common destiny of mankind, and opposes the Cold War mentality and zero-sum game. China holds that regardless of size, strength and wealth, all countries are equal, and all peoples have the right to choose their own development paths,” said Xi.

http://thesaker.is/chinas-president-xi-jinping-speech-on-the-95th-anniversary-of-the-communist-party-of-china/
Yue Gang, a retired colonel, said the statements signaled the countries’ ambition in boosting their positions in the world order. “China used to play the supporting role in cooperation with the US… It is now joining hands with Russia in playing a more ­important role in global governance,” he said.
http://www.scmp.com/news/china/diplomacy-defence/article/1981930/chinas-xi-jinping-and-russias-vladimir-putin-slam-us
This is the first time that China openly acknowledged the need for Russian-Chinese full military cooperation, although there were already covert military cooperation in the recent past especially with regards to keeping the whole Eurasian continent under control.
This is just the culmination of the massive US-NATO defeat in Turkey and the West Philippine Sea last week, whereby their plans of starting regional wars in those parts of the world were muted down by non-cooperation.
Just as Erdogan’s grip on Turkey was hanging on the balance, he masterfully switched side towards Russia at a perfect time with an official apology for his country’s downing of the Russian Sukhoi Su-24 warplane last year, paving the way for Vladimir Putin to resume his suspended geopolitical engagement with the NATO member.
What sealed the fate of NATO in the region was when the Russian intelligence intercepted the plan to oust Erdogan weeks after the official apology through a military coup directed right from NATO airbase inside Turkey. This critical information enabled Erdogan to defeat the coup even before its hasty execution. giving way for a massive purge of 5th Columnists in the country.
What is more interesting is that, in the immediate aftermath of the coup, some of the NATO buildings inside its airbase in Turkey were burned down by forces loyal to the country, and the entire airbase is in a virtual lockdown right thereafter.
There’s of course a valid concern that Erdogan may be overplaying his card at home at this moment, but Vladimir Putin is imposing preconditions about how exactly the Russia-Turkey partnership be resumed starting from the closing down of Turkey’s border with Syria, purposely to cutoff the Daesh Islamic State supply lines to pressure the  terrorists to surrender, or perish in Aleppo and in Raqqa.
NATO responded with an attempt to revive the Ukraine-Crimea card, but ended up in futility.

It is under this climate that Vladimir Putin and the Russian military hierarchy decided to transform the Syrian Hmeimim Airbase to a full military airbase, even as their long range bombers are already busy pounding hard on various terrorist positions in the region.

These massive overt and covert military defeats prompted one former CIA acting director to campaign for the killing of Russians and Iranians in Syria during an interview in the mainstream media.

But the problem for the US-NATO warmongers, on top of the aforementioned debacles, is that both Japan and the Philippines are not fully cooperating with the former’s military intentions in the Southeast Asia region. This put China and Russia at a very distinct advantage, and they are not shy of using this edge over the US, not anymore.
The preliminary talks about the peaceful resolution of the West Philippine Sea / South China Sea issue started in Hong Kong with smiles between the two parties.

Former Philippine president Fidel V. Ramos met with his Chinese friends representing the government of China to schedule a formal talk about how the two countries could cooperate bilaterally in the region without resorting to aggressive provocations which nobody wins but the outsiders.

In order to foster and “build trust and confidence and to reduce tensions and to pave the way for overall cooperation for the benefit of both their peoples and the region,” they explored possible human and ecology options, such as:

Both China and the Philippines underscored the importance of building trust for their long term beneficial relationship. Both countries value their long history of friendship as neighbors and are raising the prospect of further cooperation for the sake of future generations.
Earlier, China welcomed the appointment of Fidel Ramos as the Philippine special envoy to deal with the West Philippine Sea issue. Being a WestPointer himself and a former Carlyle Group consultant, Ramos should know by now his geopolitics especially with the not-so-good outcome of his participation to the CIA Yellow revolution in 1986 that toppled the dictator Marcos.
The first thing that the CIA’s unwitting puppet Cory Aquino did was to mothballed the just completed Bataan Nuclear Power Plant, and put all government owned corporations into private hands, both classic economic hitman strategies to forcibly put the country in shackles of economic slavery in the decades to come.
After the removal of Marcos, the country remain an underdeveloped agricultural islands, plundered for their natural resources, to continue feeding the Khazarian controlled Japanese industrial infrastructure, in turn to continue churning out cheap, high quality products, effectively subsidizing the Western economies.
In short, the economic development of the West is due in part to a well-laid out geo-economic infrastructure which, at its very foundation, is a quicksand combination of Asian and African sweatshops, scorching desert hell holes and highly automated mechanized assembly lines, all under the full control of the Khazarian financial and military mafia who impose no limits to their own caprices.
Realizing their enormous economic, manpower and military capabilities, the BRICS countries are no longer passively accepting this one-sided state of global affairs. They are rising up, and rightfully so.
Duterte has also leaked Japan’s intention to peacefully engage China in the region, during the recent state visit of Japanese foreign minister to the Philippines.

With Chinese president Xi Jinping’s latest Russia-China led World Order pronouncements, they are now officially turning over the present corrosive Khazarian Babylonian fiat system on its head, and are both ready to take the ongoing massive global redevelopment dubbed as “One Belt, One Road” to the next level with a combined military force that can effectively dwarf any other military organizations before it.
The three-some Japan, Turkey and Philippine non-cooperation to US-NATO hegemony ensures that no more wars of aggression will ever be permitted outside of the West in the foreseeable future.
This does not mean, however, that the Khazarians could not launch any war of whatever form against their own people in the West, because they are already doing the attacks on their healthcare and food systems, in conjunction with the creation of massive debts across the entire spectrum of their own economy in the last five decades or so, among other cloaked totalitarian measures that are affecting the people in concrete terms.

The continued denial and inaction of the victims, in spite of the massively devastating leaks against their own leaders as spoon fed to them through the Wikileaks infrastructure, are testing their own collective will, and whether they truly deserve their imagined freedoms [what’s left of them anyway], or not.

18 thoughts on “The Khazarian Global Checkmate Has Been Sealed”