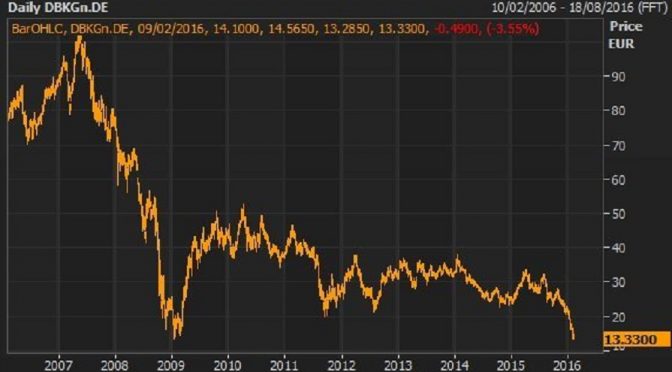 For any financial system to work, it must earn the respect and trust of its participants. This requires every financial instrument to have the integrity as to its true value and redeemability, as readily established through a mutually verifiable transparent mechanism.

Certain problems arise when several participants agree to supplant the entire system for their own exclusive benefit, and to the detriment of the majority of the players. This is exactly what is happening to the derivatives clearinghouse which failed to perform its basic predefined function of making sure all instruments traded maintain their integrity.
Here are some basic definitions:
“A derivative is a security with a price that is dependent upon or derived from one or more underlying assets. The derivative itself is a contract between two or more parties based upon the asset or assets. Its value is determined by fluctuations in the underlying asset. The most common underlying assets include stocks, bonds, commodities, currencies, interest rates and market indexes. “
http://www.investopedia.com/terms/d/derivative.asp
Yes, a derivative is labeled as secured but is fundamentally not the case, thereby requiring a process of clearing. 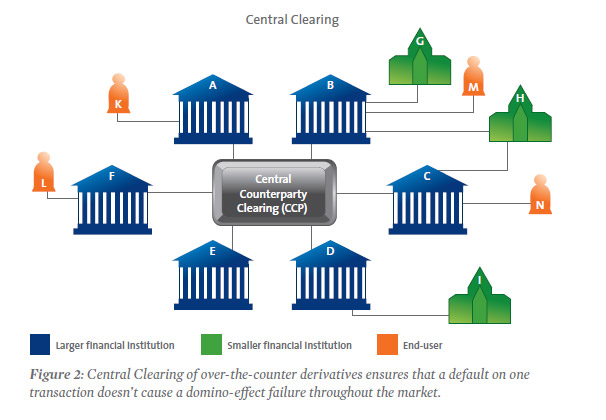 Aug. 16, 2016 (EIRNS)—The leading institutions of the bankrupt trans-Atlantic financial system issued a report today, warning that there are no mechanisms in place at this time which can prevent a blow-out the $600 trillion-plus global financial derivatives bubble, should any one major party default on derivatives.
Lyndon LaRouche has warned for three decades that derivatives, inherently fictitious, must simply be written off, a measure which can be safely and effectively carried out under a restored Glass-Steagall regime. But Wall Street and City of London wizards insisted they had everything under control; that the danger of an uncontrollable chain of derivatives defaults such as that which blew out the global system in 2007-2008, had been resolved by centralizing derivatives trading in a few “clearing houses,” which would be responsible for ensuring that derivative trades would be covered, in the case of defaults.
The Bank for International Settlements’ Committee on Payments and Market Infrastructures and the International Organization of Securities Commissions (IOSCO)—representing between them the world’s central banks and securities regulators — prepared the report, which admits that the CCPs (as the clearing houses are called), which are supposed to be the risk managers and guarantors for derivatives contracts, have no means to do so, and that the CCPs themselves have become a threat to the system.
The Financial Times of London put it this way:

“Four years after guidelines were introduced, a survey of 10 derivatives clearing houses found that some did not have sufficient policies or procedures to ensure they had enough money to keep going, or to replenish diminished reserves. Others needed to improve their stress tests, the report said.”

The Wall Street Journal summarized the content of the BIS/IOSCO report: “Clearinghouses still have shortcomings in their risk-management and recovery practices, which could have marketwide ramifications in the case of default.”
Business Insider, at least, had the guts to admit that the results of that survey “are slightly terrifying,” because if the clearing houses don’t work, derivatives are “just unexploded nuclear bombs nestling deep in the financial system.”
The International Swaps and Derivatives Association sent an email to Business Insider acknowledging in its understated way, that

“several clearing houses have become systemically important as a result of global clearing mandates, and it’s vital this infrastructure is as secure as possible, which means establishing a credible and robust recovery and resolution framework.”

In turn, the Financial Stability Board (FSB), established in 2009 by the G20 Finance Ministers for the express task of overseeing “prudent” handling of the global financial system, and headed by the Bank of England’s Mark Carney, today issued a note

“calling for public comment from the industry [sic] to help develop resolution strategies and plans for winding down CCPs in the case of a global financial shock. Respondents have until Oct. 17 to reply to questions set out by the FSB,”

the Wall Street Journal reported.
The WSJ coverage implies that the report was prepared on the insistence of China, the current head of the G20, which has placed the safety of central clearing houses “high on the agenda” of the upcoming Sept. 4-5 G20 summit, which China is hosting. When it took over the G20 in December 2015, China immediately revived the G20 International Financial Architecture Committee, forcing discussion of the global system back on the agenda.
http://www.larouchepub.com/pr/2016/160816_bis_warns.html
They’re responsible for the establishment of the whole deliberately complicated, multi-layered financial system that is beyond regulation due to the inherent profit motive in the system. The motivation to profit is proven to be the most corrosive character which eats up the soul of every player participating in the system.
The solution is the complete elimination of the profit oriented financial system in favor of the intelligent management of the planet’s finite resources that should be considered as our common heritage, and the full decentralization of global governance in favor of the economic and full political empowerment of the individual.
We already have the means to make this thing happen. The collective will towards this direction is yet to come.