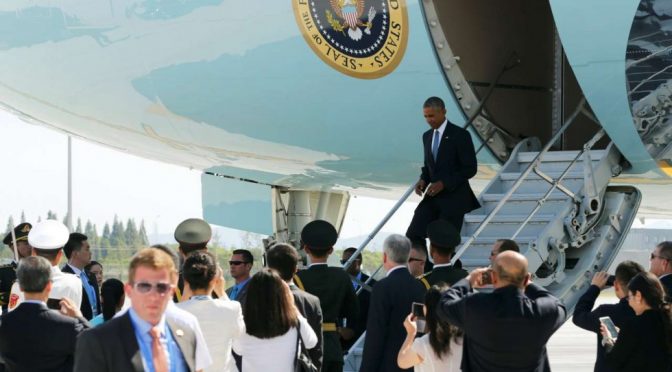 Every high-profile meeting like the G20 involves an elaborate preparation, from security down to the minutest detail of providing the red carpet welcome to every invited leader of member countries and guests.

It would be unthinkable to not provide a mobile staircase to stick onto the side of a presidential plane that would led the guests to the red carpet down below.
That’s exactly what happened to the arrival of the US president Barack Soetoro Obama.
China’s leaders have been accused of delivering a calculated diplomatic snub to Barack Obama after the US president was not provided with a staircase to leave his plane during his chaotic arrival in Hangzhou before the start of the G20.
Chinese authorities have rolled out the red carpet for leaders including India’s prime minister, Narendra Modi, the Russian president, Vladimir Putin, the South Korean president, Park Geun-hye, Brazil’s president, Michel Temer, and the British prime minister, Theresa May, who touched down on Sunday morning.
But the leader of the world’s largest economy, who is on his final tour of Asia, was forced to disembark from Air Force One through a little-used exit in the plane’s belly after no rolling staircase was provided when he landed in the eastern Chinese city on Saturday afternoon.
When Obama did find his way on to a red carpet on the tarmac below there were heated altercations between US and Chinese officials, with one Chinese official caught on video shouting: “This is our country! This is our airport!”
“The reception that President Obama and his staff got when they arrived here Saturday afternoon was bruising, even by Chinese standards,” the New York Times reported.
Jorge Guajardo, Mexico’s former ambassador to China, said he was convinced Obama’s treatment was part of a calculated snub.
“These things do not happen by mistake. Not with the Chinese,” Guajardo, who hosted presidents Enrique Peña Nieto and Felipe Calderón during his time in Beijing, told the Guardian.
“I’ve dealt with the Chinese for six years. I’ve done these visits. I took Xi Jinping to Mexico. I received two Mexican presidents in China. I know exactly how these things get worked out. It’s down to the last detail in everything. It’s not a mistake. It’s not.”
Guajardo added: “It’s a snub. It’s a way of saying: ‘You know, you’re not that special to us.’ It’s part of the new Chinese arrogance. It’s part of stirring up Chinese nationalism. It’s part of saying: ‘China stands up to the superpower.’ It’s part of saying: ‘And by the way, you’re just someone else to us.’ It works very well with the local audience.
“Why [did it happen]?” the former diplomat, who was ambassador from 2007 until 2013, added. “I guess it is part of Xi Jinping playing the nationalist card. That’s my guess.”
Bill Bishop, a China expert whose Sinocism newsletter tracks the country’s political scene, agreed that Obama’s welcome looked suspiciously like a deliberate slight intended “to make the Americans look diminished and weak”.
“It sure looks like a straight-up snub,” Bishop said. “This clearly plays very much into the [idea]: ‘Look, we can make the American president go out of the ass of the plane.’”
https://www.theguardian.com/world/2016/sep/04/barack-obama-deliberately-snubbed-by-chinese-in-chaotic-arrival-at-g20
The pro-Western medium South China Morning Post [here] tried to attenuate the glaring snub by saying that it was the US delegation who requested to not provide the ramp in the first place.

“It was Washington’s decision to have US President Barack Obama disembark from his plane through a small bare metal stairway instead of the usual rolling red-carpet staircase that state leaders get, a Chinese foreign ministry official has revealed.”

But what about the shouting, “This is my country and my airport…”?

Did the US delegation requested that, too?
The truth of the matter is, there‘s now a consensus in Asia not to welcome anymore geopolitical interference from the United States government, or its Khazarian benefactors.
Indonesia has known early on that it was the US extortionists who caused the Indian Ocean Tsunami. It’s very consistent in its refusal against more Western company mining on its soil.
For Japan, it was a frontal extortion with Fukushima nuclear tsunami right from the start. That’s why it is now collaborating with Russia and other stakeholders in the establishment of a unified alternative energy grid in order to defeat the financial backbone of the Khazarian oil financiers causing wars for oil in the Middle East.

In late March, Russia’s Rosseti Company, the China State Grid Corporation, the Korea Electric Power Corporation and Japan’s Softbank Group agreed to establish and interconnected energy system to encompass the entire region of Northeastern Asia and eventually to build a number of separate energy bridges, including one between Russia’s Sakhalin Island and Japan.
Speaking on the sidelines of a GAZTECH conference earlier this year, the International Energy Agency’s former director Tanaka Nobuo said that after the disaster at Japan’s Fukushima nuclear power plant in March 2011, Japan shut down almost all its nuclear power stations, thus making the country dependent on energy supplies from abroad.
“Without nuclear energy we have become too dependent on fuel supplies, above all from the Middle East, but the current political instability there is a big risk, that’s why we are diversifying both our energy resources, such as oil, gas and coal, and the countries where we are buying fuel. Staking on natural gas imports, we could shift our focus from the Middle East to suppliers in North America, Australia, the ASEAN countries and Russia, which could become a major supplier,” he said.
Read more: http://sputniknews.com/russia/20160904/1044945899/asia-energy-cooperation.html

This level of cooperation ensures that no more wars of aggression will ever be permitted just so another Khazarian oil pipeline is laid on any part of Eurasia.
On the other hand, Duterte has acknowledged in one media ambush interview that he is “more excited on meeting Vladimir Putin” than Obama, when asked about his talking points with the latter once they met at the outset of the ASEAN Summit in Laos this month.

This statement came hours after he confirmed to have talked with the Chinese ambassador to the Philippines for 4 straight hours. Obviously, they were not talking about how socioeconomically invasive Pokemon Go really is.
It would also be wrong to assume that terror and earthquake attacks could change the current Philippine geopolitical trajectory.

The Asian leaderships are now visibly standing up to the arrogance of the Exceptionalists who still think the rules do not apply to them.
Change is Ongoing!

10 thoughts on “Xi’s Epic Snub vs. Obama at G20 Summit Reflects Asia's Collective Wrath Over US Interference in the Region”