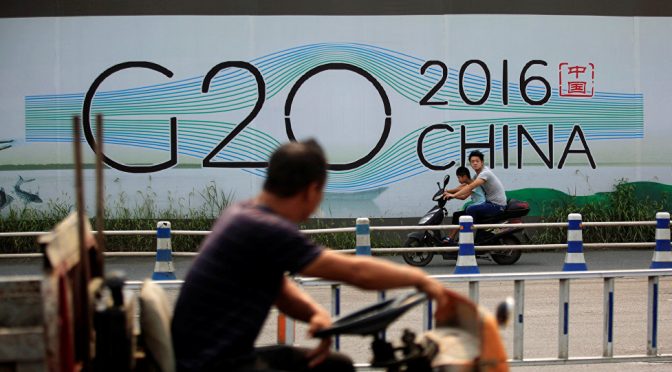 The ongoing G20 Summit could be the most pivotal juncture in the Eastern lead march towards global reforms as the two BRICS biggies, China and Russia, capitalize on their geopolitical gains in the Middle East.

Asia geopolitical expert Pepe Escobar writes,
The G20 meets in tech hub Hangzhou, China, at an extremely tense geopolitical juncture.
China has invested immense political/economic capital to prepare this summit. The debates will revolve around the main theme of seeking solutions “towards an innovative, invigorated, interconnected and inclusive world economy.”
G20 Trade Ministers have already agreed to lay down nine core principles for global investment. At the summit, China will keep pressing for emerging markets to have a bigger say in the Bretton Woods system.
But most of all China will seek greater G20 backing for the New Silk Roads – or One Belt, One Road (OBOR), as they are officially known – as well as the new Asian Infrastructure Investment Bank (AIIB).

So at the heart of the G20 we will have the two projects which are competing head on to geopolitically shape the young 21st century.

China has proposed OBOR; a pan-Eurasian connectivity spectacular designed to configure a hypermarket at least 10 times the size of the US market within the next two decades.
The US hyperpower – not the Atlanticist West, because Europe is mired in fear and stagnation — “proposes” the current neocon/neoliberalcon status quo; the usual Divide and Rule tactics; and the primacy of fear, enshrined in the Pentagon array of “threats” that must be fought, from Russia and China to Iran. The geopolitical rumble in the background high-tech jungle is all about the “containment” of top G20 members Russia and China.
It doesn’t take an oracle to divine which project is intriguing — and in many ways seducing — the Global South, as well as an array of G20 member-nations.
That connectivity frenzy
Shuttling between the West and Asia, one can glimpse, in myriad forms, the graphic contrast between paralysis and paranoia and an immensely ambitious $1.4 trillion project potentially touching 64 nations, no less than 4.4 billion people and around 40 per cent of the global economy which will, among other features, create new “innovative, invigorated, interconnected and inclusive” trade horizons and arguably install a post-geopolitics win-win era.

An array of financial mechanisms is already in place. The AIIB (which will fund way beyond the initial commitment of $100 billion); the Silk Road Fund ($40 billion already committed); the BRICS’s New Development Bank (NDB), initially committing $100 billion; plus assorted players such as the China Development Bank and the Hong Kong-based China Merchants Holdings International.

Chinese state companies and funds are relentlessly buying up ports and tech companies in Western Europe – from Greece to the UK.
Cargo trains are now plying the route from Zhejiang to Tehran in 14 days, through Kazakhstan and Turkmenistan; soon this will be all part of a trans-Eurasia high-speed rail network, including a high-speed Transiberian.

The $46 billion China-Pakistan Economic Corridor (CPEC) has the potential to unblock vast swathes of South Asia, with Gwadar, operated by China Overseas Port Holdings, slated to become a key naval hub of the New Silk Roads.

Deep-sea ports will be built in Kyaukphyu in Myanmar, Sonadia island in Bangladesh, Hambantota in Sri Lanka. Add to them the China-Belarus Industrial Park and 33 deals in Kazakhstan covering everything from mining and engineering to oil and gas.
Back in February, PwC was already detailing $250 billion in OBOR projects that had been built, recently started or agreed on and signed.
An array of Silk Road projects now crisscross Eurasia, progressively networking east-west and north-south corridors through many an economic zone; an expanding connectivity and infrastructure development frenzy involving Russia, China, India, Pakistan, Iran, Southeast and Central Asia. Connectivity, now more than geography, is destiny.
It’s not by accident that a lot of the action happens in member-states or observers of the Shanghai Cooperation Organization (SCO). The New Silk Roads are about to be totally intertwined with the reprogramming of the SCO as a security-economic cooperation umbrella.
In parallel Russia, with the progressive coordination of the Eurasia Economic Union (EEU) with the New Silk Roads, projects the Russia-China strategic partnership much further than just New Silk Road connectivity to Europe.
Follow those CUES
Southeast Asia – via the Maritime Silk Road — is a key hub in the New Connectivity Game in Eurasia. Which brings us to the alleged illegality of the “nine-dash line” Chinese claim of indisputable sovereignty as recently ruled in The Hague.
The US and the Philippines have a mutual defense treaty since 1951, according to which “island territories under [Manila’s] jurisdiction” must also be defended. Washington under a potential neoliberalcon Hillary Clinton presidency – and Kurt Campbell, who conceptualized the “pivot to Asia” as possible Secretary of State — might be tempted to declare the treaty applies to offshore islands, atolls, “rocks” and even underwater features such as Scarborough Shoal.

Beijing won’t wait to fall into this possible trap. Following a recent meeting in Inner Mongolia, China and ASEAN are set to launch an emergency diplomatic hotline and eventually adopt a Code for Unplanned Encounters at Sea (CUES).

ASEAN and East Asian powers, meanwhile, keep weighing the merits of the Regional Comprehensive Economic Partnership (RCEP) — 16 nations, 29% of global trade – as an alternative to the US corporate-pushed TPP, a sort of NATO-on-trade that excludes China.
China is hyperactive on all fronts. It will boost the use of Singapore know how to advance New Silk Road projects. Singapore, with a population nearly 75% ethnic Chinese, is China’s largest foreign investor and a major overseas hub for yuan trade. More than 20% of Singapore’s GDP is linked to China.

At the same time, planning for a post-war Syria, Beijing is committed to boost trade and economic cooperation with Damascus, another future OBOR hub. It does not hurt this is also asymmetrical payback for Pentagon interference in the South China Sea and the deployment of THAAD in South Korea.

Beijing has made it clear that the South China Sea won’t be discussed at the G20. Philippine President Rodrigo Duterte for his part has insisted, “We’re not in a hurry to wage war, we’re in a hurry to talk.”
The heart of the matter in the OBOR-linked South China Sea is not sovereignty over “rocks” or even unexploited reserves of oil and gas; it hinges on the capacity of the Chinese Navy to regulate and eventually deny “access” to the Pentagon and the US Navy. What’s certain is that the US Navy will take no prisoners to prevent China from strategically dominating the Western Pacific, as much as Washington will go no holds barred to ram TPP to prevent China from economically reign over the Asia-Pacific.
Deng Xiaoping’s maxim – “never take the lead, never reveal your true potential, never overstretch your abilities” – now belongs to the past. At the G20 China once again is announcing it is taking the lead. And not only taking the lead – but also planning to overstretch its abilities to make the hyper-ambitious OBOR Eurasia integration masterplan work. Call it a monster PR exercise or a soft power win-win; the fact that humanitarian imperialism as embodied by the Pentagon considers China a major “threat” is all the Global South – and the G20 for that matter — needs to know.
http://sputniknews.com/columnists/20160831/1044816377/g20-geopolitical-juncture.html

3 thoughts on “The Ultimate 21st Century Choice: One Belt One Road or War”