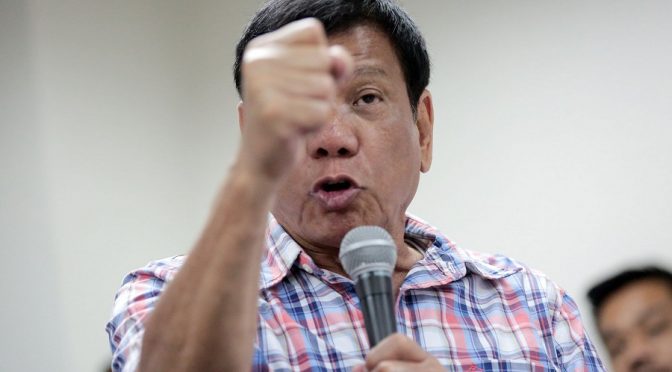 Another Reuters reporter has asked another stupid question of how would Duterte explain the spate of extrajudicial killings in the Philippines to Obama in Laos tomorrow.
Duterte’s lengthy response only made matter worse diplomatically for Obama who just survived a blatant insult hurled at him at the G20 Summit in Hangzhou, China.

https://www.youtube.com/watch?v=lR3ZGUu4C4I
Transcript:
“The Philippines is not a vassal state. We have long ceased to be a colony of the United States. You know, a lot of those columnists they look upon Obama and the United States as if they are the US lapdogs in this country.
I do not respond to anybody but to the people of the Republic of the Philippines. I don’t care about him [Obama] , who is he?
When as a matter of fact, at the turn of the 20th century, before the Americans left the Philippines, in the pacification campaign of the Moro in this island [Mindanao], there were about 6 million population. How many died?
600 [thousand.]
If he can answer that question and give the apology, I will answer him [about the extrajudicial killings.]
I am not beholden to anybody. All those columnists who say, wait until he meets [Obama], who is he?
I am a president of a sovereign state, and we have long ceased to be a colony.  I do not have any master except the Filipino people. Nobody, but nobody. F—-.
You must be respectful. Do not just throw away statements. Putang ina mo, mumurahin talaga kita sa forum na ‘yan. [You, son of a bitch, I will swear at you in that forum.]
Don’t do that to me. Tell that to everybody. These columnists want to scare me, sons of bitches. Get away from the Philippines and go to America. You write as if you’re lapdogs of these Americans.
Who is he to confront me? As a matter of fact, he has so many… America has one to many to answer for the misdeeds in this country. Until now, we haven’t heard any apology from them. That is the reason why Mindanao continues to boil.
Some said that was during the last century. But the wounds are carried on from generations to generations. As a matter of fact, we inherited this {Mindanao Moro] problem from the United States. Why?
Because they invaded this country and made us their subjugated people.
Everybody has a terrible record of extrajudicial killings. Why make an issue about fighting crime?
He cannot even deal effectively with those at the Mexican border. Look at the human rights [record] of America along that line, the way they treat the migrants there.
You are all so enamored with America. You should be proud of who we are.
He [Obama] should be the one explaining to me why they are doing those extrajudicial killings… Can he explain the 600,000 Moro massacred in this island?
Do you want to see the pictures?
Maybe you’ll ask him. I’ll make it public. We have a recorded history of that sordid period of our national life.
Nobody, but nobody can just… who are you?
Even the American Indians… in movies, you wiped them out. What about the human rights who died in the past?
Is it because it’s just the past tense that we don’t answer for the present tense?
You must be kidding. Stop joking yourself, all of you who are adoring… who is he Obama to ask me that?
I tell him who are you? Tell him that. Telegraph it now.
Why do we have to bow down?
We have long been a republic. I do not kneel down before anybody else except the Filipino in Quiapo walking in misery, and in extreme poverty, and hunger.
The drug campaign will continue and many will die until the last pusher is out of the streets… until the drug manufacturer is killed. We will continue and I don’t give shit about anybody observing my behavior.
These US lapdogs are pretending to be the conscience of this… I would even kick them all in front of him.
There are a lot of you who talked so much about extrajudicial killings and then connect it with Obama. I don’t want to pick a quarrel with Obama, but certainly I would not appear beholden to anybody.
I only am answerable to the Filipino people who elected as president. This is an independent country. Nobody has the right to lecture me.
Don’t do it.
I do not accept the proposition that anybody is superior to me. We are supposed to be equal there.
My country might be small, hardly keeping up with the economic problems. But I will not allow myself to be insulted, or the Filipinos.
But there are others whose mental capacity of dogs who lapped at the asses of the Americans.
Thank you.

Obama, on the other hand, appears to have lost the appetite to talk to Duterte. Obviously, he was insulted even before this speech when the latter admitted to rather talk to Vladimir Putin instead.

Asked at a news conference in Hangzhou, China, whether he still intends to meet with Duterte and raise the issue of extrajudicial killings, Obama said he had instructed his aides to assess whether it is still possible for the two leaders to have a constructive meeting in Laos.

“I always want to make sure that if I’m having a meeting that it’s actually productive, and that we’re getting something done,” Obama said.

“We recognize the significant burden that the drug trade plays not just in the Philippines but around the world, and fighting narco-trafficking is tough. But we will always assert the need to have due process and to engage in that fight against drugs in a way that’s consistent with basic international norms. And so, undoubtedly, if and when we have a meeting this is something that is going to be brought up,” said Obama, who has been attending a meeting of the Group of 20 nations.

5 thoughts on “Obama, who is he? | President Duterte”