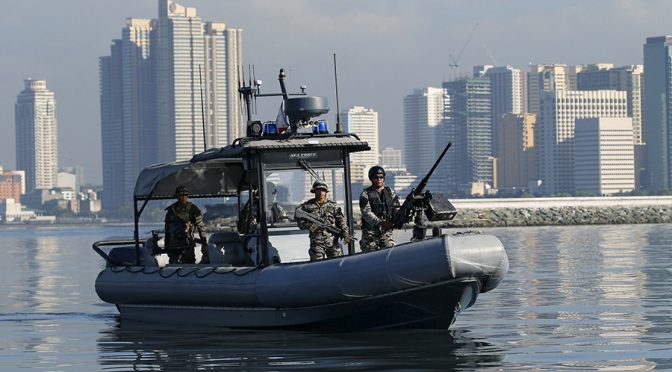 In the ongoing fight against terrorism in the South, primarily with the ISIS affiliated Abu Sayyaf who are engaged in city bombings and cross border kidnappings, the Duterte government plans to avail of Russian and Chinese made military equipments through a 25-year soft loan offered by both governments without strings attached as perennially experienced with US arms procurements  in the last 70 years.

At present government troops suffered heavy casualties in Basilan and Sulu, due to malfunctioning weaponry supplied by the United States. It is public knowledge that the Abu Sayyaf has far more advanced equipment in carrying out their operations.
Philippine leader seeks arms from Russia & China, pursues policies independent from US
The Philippines will pursue “independent” foreign and military policies separate from US interests in the region, the country’s president said, announcing that in order to avoid any confrontations with China he would halt joint Filipino navy patrols with the US.
The Asian country may now also look toward China and Russia in order to acquire new weapons so that it can improve its capabilities tackling insurgencies and terrorism in the country.
In April, the Filipino navy began joint South China Sea naval patrols with the US to respond to China building artificial islands over disputed reefs.
Philippine President Rodrigo Duterte, who has been openly critical of American security policies, announced in a televised speech Tuesday, before military officers in Manila, a ‘paradigm shift’ in the country’s dealing with allies.
“We are not cutting our alliances – military (alliances) as well. But certainly, we will follow an independent posture and independent foreign policy,” Duterte said.
The first step for the Philippines is to opt out of US-led patrols of the South China Sea because the country does “not want trouble,” the president said announcing that his navy “will not join any expedition of patrolling the seas… because I do not want my country to be involved in a hostile act.”
The second step that Duterte hinted at was the ending of the Philippine reliance on US weaponry by at least partially shifting the procurement of arms to Russia and China. Duterte said that the two countries had agreed to give the Philippines a 25-year soft loan to buy military equipment.
About 75 percent of the Philippines’ arms imports since the 1950s came from the US, according to Stockholm International Peace Research Institute. Russia and China have since that time have been out of the loop.
In announcing a definite shift in defense policy, the president said that he wanted to buy arms “where they are cheap and where there are no strings attached and it is transparent.”
“Let’s contend ourselves with the propeller-driven planes but which we can use extensively in counter-insurgency,” Duterte added. “I don’t need jets, F-16 – that’s of no use to us… we don’t intend to fight any country.”
The president said that Defence Secretary Delfin Lorenzana and “technical people” in the armed forces would visit China and Russia “and see what’s best.”
The shift in the country’s foreign policy came a day after Duterte called for the withdrawal of US troops in Mindanao, supposedly to keep them from being killed by the terror group Abu Sayyaf. A limited US troop contingent was deployed to the country in 2002 to train, advise and provide intelligence and weapons to Filipino troops battling Al-Qaeda-linked militant group in the southern Philippines.
https://www.rt.com/news/359255-philippines-us-independent-policies/
It must be understood that throughout the entire duration of the US-Philippine military alliance, the local armed forces have regressed beyond recognition.
To illustrate, in its fight against Chinese incursions into our EEZ in the Spratlys the best that we could do is to deliberately run aground an already dilapidated naval ship earlier given by the United States, to establish our rights over the contested areas. This is of course to counter the island building and airstrip constructions of China.

“The Philippine navy is quietly reinforcing the hull and deck of a rusting ship it ran aground on a disputed South China Sea reef in 1999 to stop it breaking apart, determined to hold the shoal as Beijing creates a string of man-made islands nearby.”