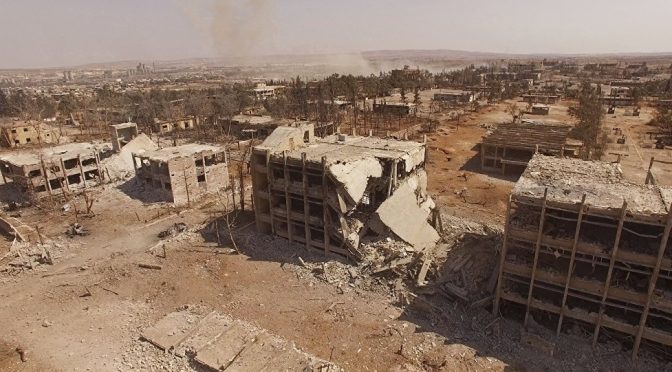 With the aid of the Russian S-400 missile shield, the Syrian Armed Forces successfully shot down an Israeli aircraft and a UAV intruding into the country. This latest Israeli misadventure resulted in the accelerated approval of “a record $38 billion in new US military aid over the next decade.”

This generous US military assistance will, of course, feed the military industrial complex at the top of both Israel and US governments, in spite of the crumbling financial condition, dilapidated infrastructures, and deteriorating quality of life in America.
“The United States agreed Wednesday to provide Israel a record $38 billion in new military aid over the next decade. The pact is a sign of the two nations’ close alliance despite major differences over Iran’s nuclear program and other policies.
The agreement, which equates to $3.8 billion a year, is the largest bilateral military aid package ever and includes $5 billion for missile defense, additional F-35 joint strike fighters and increased mobility for its ground forces.
The aid package “is just the most recent reflection of my steadfast commitment to the security of the state of Israel,” President Obama said in a statement.
… National Security Adviser Susan Rice said the package was good for the U.S. as well. “When our partners and allies are more secure, the United States is more secure,” Rice said at a signing ceremony Wednesday at the State Department.”
http://www.usatoday.com/story/news/world/2016/09/14/united-states-military-aid-israel/90358564/
The willful killings of USS Liberty crew by the Israeli Air Force was ignored once again.
Meanwhile, ”the General Command of the Army and the Armed Forces said on September 13 that the Syrian Defense Forces have shot downed two aircraft belonged to the Israeli Air Force in eastern Syria. According to the Syrian state-run SANA news agency, an Israeli warplane was downed southwest of Quneitra and an Israeli drone west of Sa’sa’.
The Syrian Armed Forces’ move was an answer to airstrikes on the Syrian Arab Army conducted by Israeli aircraft around 1:00 am (local time) on September 13. SANA emphasized that Israeli air strikes were made in support of the offensive of Jabhat Fateh Al-Sham (formerly Jabhat Al Nusra), Harakat Ahrar Al-Sham and others on the government positions in the province of Quneitra.
Israel denied the losses in Syria.”
https://southfront.org/syrian-air-defense-forces-shoot-down-two-israeli-aircraft-over-syria/
However, a prominent Syrian military analyst underlined that the shooting down of two Israeli aircraft in Southwestern Syria bore the message that Israeli aggression will not remain unanswered.

“The shooting down of 2 Israeli aircraft by the Syrian air defense units after several attacks and aggressions by the Israeli air force against the Syrian territories sent this clear message from the Syrian leadership that continued Israeli aggression is not allowed and Syria can respond to such a move whenever it wants based on its strategic tactics,” Hassan Hassan told FNA on Thursday.
“The Syrian government proved that its air defense system is still ready to confront any aggression, especially when Israel thought that its aggressions will not face any reaction,” he added.
The General Staff of the Syrian Armed Forces announced on Tuesday that the county’s air-defense units deployed in the Southwest of the country have shot down two Israeli aircraft in Quneitra province.
“An Israeli aircraft, which had violated the airspace of the Southwestern parts of Quneitra province, was traced and shot down by the anti-aircraft missiles of the Syrian Army in the early hours of this morning,” the country’s General Staff said in statement.
“Meanwhile, an Israeli spy drone was also targeted by the Syrian army fire on the Western side of Sa’asa’ near the Golan Heights,” the statement added.
The Israeli military aircraft had violated Syrian territories to back the terrorist groups’ offensives on the government forces’ positions near Golan Heights in Quneitra.
http://en.farsnews.com/newstext.aspx?nn=13950625000229
On the other hand, the Yemeni army and popular forces attacked a strategic region in Najran and took control of Saudi Arabia’s biggest military base in the Southern province.

“The Yemeni forces gained control of the biggest military base in Najran region and seized all the arms and weapon systems there, including missiles and tanks,” Abdul Sattar al-Matari, a commander of resistance forces, told FNA on Thursday.
Also, Ali al-Hamzani, a commander of the Yemeni popular forces, said that the Yemeni forces continued their large-scale offensive in the Southern parts of Saudi Arabia, targeting the Saudi military camps in Jizan Region.
He added that his forces managed to capture the Al-Farida military camp in Jizan Region after a fierce battle with the Saudis.
In addition to capturing this military site, the Yemeni forces seized the Saudi Army’s heavy weapons and Abrams tanks that were left behind, Hamzani said.
Al-Farida military camp is located near the contested city of al-Khabuh in Jizan region; it was one of the Saudi army’s main bases in this area.
http://en.farsnews.com/newstext.aspx?nn=13950625000351
What was at first a 48-hour Aleppo ceasefire is now on its 3rd day and attempts at rearming the terrorists have been suppressed. Yet, the possibility of the Saudi/Qatar/Israeli covert intervention may still be attempted. This had happened before, in fact the terrorists are now reported to have redeployed their units to the Northwest of Aleppo and are forming assault groups.

“Terrorists are assembling a lot of fighters in Kafr Hamra. According to our data, they are forming assault groups,” said the source, Ria Novosti reported.
According to the source, additional units were redeployed from Idlib province to Aleppo city.
“We do not know yet where the terrorists plan to strike, but it is very likely that they will try to block Castillo road, which is the city’s Northern supply route,” the source added.
On September 9, Russian Foreign Minister Sergey Lavrov and US Secretary of State John Kerry announced a new peace plan to address the conflict in Syria that called for a ceasefire to come into force on Monday.
If the new ceasefire in Syria lasts for seven days, the United States and Russia will launch the joint implementation center on distinguishing between militants and terrorist groups.
http://en.farsnews.com/newstext.aspx?nn=13950625001086
One can only imagine how much patience is required of the Russia-Iran-China coalition in dealing with these dessert rats and the hoodlums in suit and tie lurking in Washington these days, as the Syrian civilians still trapped inside the city have to endure the Wahhabists’ cruel treatment.
In another town of Deir Ezzur, a totally different picture is being painted as the residents themselves are the ones hunting the terrorists.

The ISIL terrorists attempted to attack al-Tabni village in Deir Ezzur to loot the residents’ properties but were faced with people’s firm resistance and fled the scene after sustaining a heavy toll.
A local source reported on Thursday that the residents of al-Tabni village defended their lands and properties in heavy clashes with the ISIL terrorists, killing 17 militants and wounding several others.
According to the source, Ammar al-Hassani, a notorious ISIL leader who committed a horrible crime against the people on Eid al-Adha (the Muslims’ feast of sacrifice), was among the hunted terrorists.
Earlier this week, the ISIL beheaded several civilians the terrorist group has recently arrested in Syria’s Deir Ezzur province after hanging them upside-down.
The ISIL released a video showing a slaughter house where the terrorist group chooses several people from those whose hands are tied up and are placed on one another to hang them for beheading.
The terrorist group has accused the executed people of informing the Syrian military forces about the ISIL’s military positions and photos of the terrorists.
The horrendous crime by the ISIL terrorists was carried out concurrent with Eid al-Adha.
http://en.farsnews.com/newstext.aspx?nn=13950625000253
With final defeat looming and with nothing else to do, the Daesh terrorists decided to liquidate their own commanders.

The ISIL terrorist group gunned down two of its most notorious commanders in Deir Ezzur for unknown reasons, a field source said on Thursday.
According to the source, Maysar al-Kalizi and Anas al-Abdon were executed by ISIL’s security forces.
The ISIL has executed a large number Syrian and Iraqi citizens for not joining the group and also over spying charges. The Takfiri militant group has also killed its senior commanders, security forces and fighters in Syria and Iraq for various reasons, including fleeing the war fronts.
Late in August, the ISIL terrorist group had also executed one of the most notorious security commanders in al-Sho’eitat region of Deir Ezzur.
Va’el Kassb al-Quweider, known as the right hand of senior commander of ISIL in Deir Ezzur Jafar al-Khalifeh, was killed by the group’s security forces in the village of al-Kashkiyeh.
“Al-Quweider was notorious among the region’s civilian for his atrocities against innocent people while occupation of villages of al-Sho’eitat region in 2014,” local sources said, adding, “There is no news about the cause of his execution.”
http://en.farsnews.com/newstext.aspx?nn=13950625000647 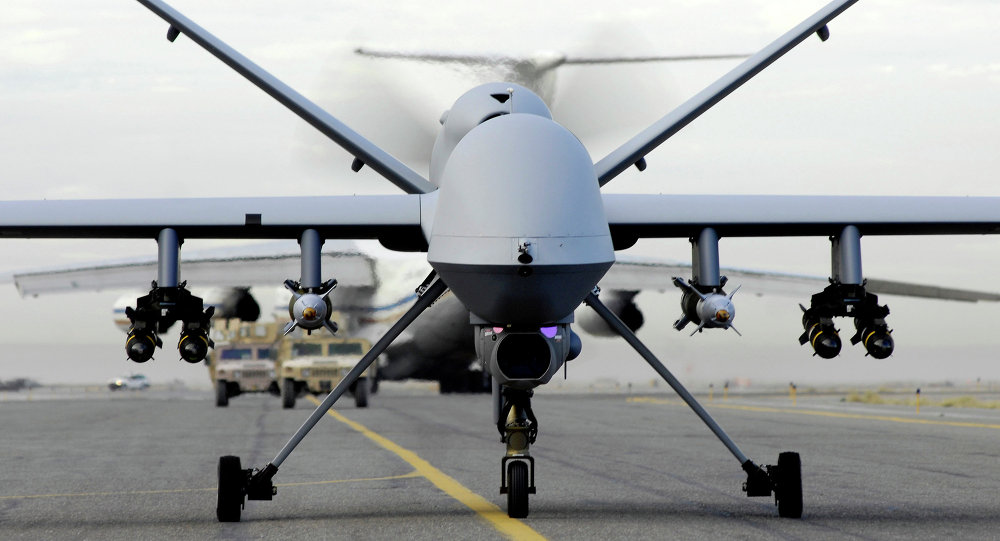 If only the Western population could stop their own governments from funding all these needless wars, we could all be savoring the better applications of all these advanced technologies now being employed on the battleground. But, the Pentagon is still at it as we watch them from the sidelines.
If a new study is accurate, drones of the future will not need a human controller – and could in fact defeat a human in a dogfight.
“It seemed to be aware of my intentions and reacting instantly to my changes in flight and my missile deployment,” said former Air Force battle manager Gene Lee, referring to a recent simulations against battle-AI software, according to Breaking Defense.
Read more: https://sputniknews.com/military/20160809/1044072917/alpha-ai-drones.html
Surely, the Americans are fully aware about the global problem emanating from their own turf, but the approval of their $38 billion military assistance to Israel, i.e. military industrial complex, only suggests they’re not doing enough.
These interim Khazarian defeats don’t mean they have entirely lost the Syrian chessgame. They have successfully transformed much of the country back to the Stone Age.
All they need to do is to look at how smaller and less powerless countries are standing up to the Khazarians.