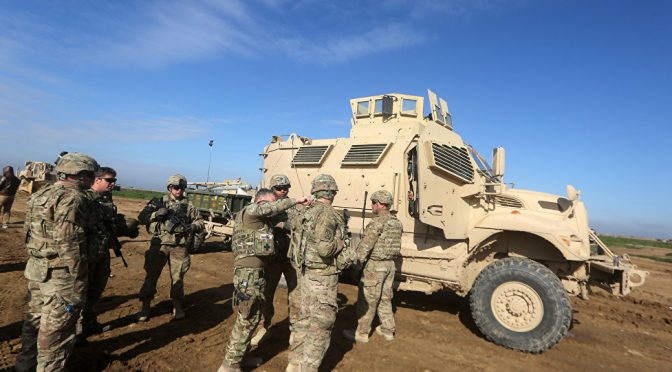 Multi-sided geopolitical interests are colliding in Syria where the US-funded “moderate rebels” are now turning against the United States armed operatives embedded with the Free Syrian Army who are only after the fall of the Assad government, but not willing to give way to total US control either.

This is compounded by the US collaboration with Turkey in its fight against the Daesh, if indeed the whole narrative is true, as the latter pivots to Russia. Both US and Turkey are not in agreement however, as far as the Kurdish question is concerned.
The Kurds who are being supported in turn by the United States are themselves fighting alongside the Syrian government forces to topple Daesh ISIS and the US moderate rebels. It would be impossible for these Syrian “moderate rebels” to not notice the game that the US is playing.
Continental warlords in Israel, Saudi Arabia and Qatar are also dipping their hands on the Syrian pie.
This highly convoluted situation is just a preview of what’s going to happen in Syria if the Khazarian Zionists are allowed to have its way, just like how they turned Libya into a hodgepodge of multi-ethnic interests to cloak the bigger players exploiting the resources in the region.
While the United States has consistently backed what Washington refers to as “moderate” rebels in the Syrian conflict, video released Friday appears to show those same moderate fighters turning on American Special Forces.
On Friday, the Pentagon announced that dozens of US Special Operations Forces had been deployed to Syria to fight alongside the Turkish military and so-called moderate Syrian rebels. “At the request of the government of Turkey, US special operations forces are accompanying Turkish and vetted Syrian opposition forces as they continue to clear territory from ISIL [Daesh] in and around the area of the Syrian border near Jarabulus and Ar Rai,” Pentagon spokesman Jeff Davis told reporters. These joint ops appear to be off to a rocky start.

Footage appears to show US commandos being chased from the town of Ar Rai by fighters of the Free Syrian Army (FSA).
“Christians and Americans have no place among us,” one fighter shouts. “They want to wage war to occupy Syria.”

VIDEO: US special forces leave Al-Rai in N. Syria after allegedly coming in conflict with other fighters – @ValkryV pic.twitter.com/Js91FuhMbu

“The collaborators of America are dogs and pigs,” shouts another. “They wage a crusader war against Syria and Islam.”
According to Charles Lister, a senior fellow with the Middle East Institute, the incident revolved around the FSA’s fears that the US was now supporting the Kurdish People’s Protection Units (YPG).
“Heated tempers and YPG relations aside, this was a big mistake by FSA. But it does go to show the diplomacy now required to make it work,” Lister told the Telegraph.
On September 9, Russian Foreign Minister Sergei Lavrov and US Secretary of State John Kerry announced a new peace plan to address the five-year civil war in Syria, calling for a ceasefire to begin on Monday. If the ceasefire holds, Washington and Moscow will work toward establishing a Joint Implementation Center.
On Friday, the US began sharing data with Russia on the location of the moderate opposition groups.
“Russian officers have contacted representatives of Pentagon and the US special services in Geneva. We are examining the data related to the areas of operation of US-controlled armed groups, which we’ve received today,” Alexander Zorin, special representative of the Russian Defense Ministry, told reporters.
“But a preliminary analysis revealed that the distinctions between the group and terrorists hadn’t been made.”
https://sputniknews.com/middleeast/20160916/1045389953/moderate-rebels-chase-us-commandos.html
The situation in Syria is deliberate especially from the viewpoint of the off-regional players.
It’s the Jesuits who mastered mind reprogramming and the Art of Political Intrigue. The weapon is so effective in sowing discord all over the planet. But their students at the US State Department are applying the same technique haphazardly, and the pet dogs are now starting to bite the hands that are feeding them.
Overall, US influence is evidently waning everywhere for its cause wasn’t, and still isn’t just. The situation is so bad, even the terrorists they have nurtured over the years are now rejecting them.