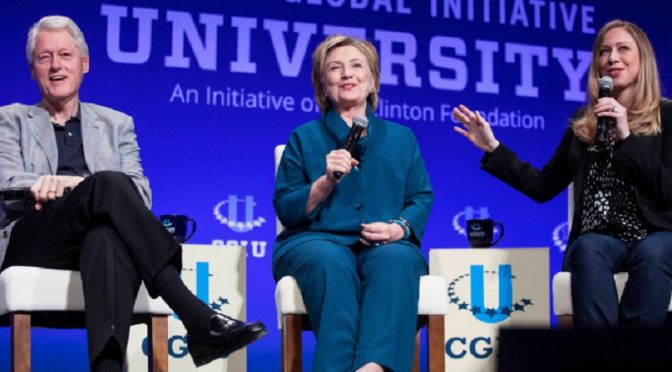 After the earthquake attack on Haiti to plunder its gold bullion stored at their Central Bank, scores of humanitarian NGOs, e.g. Red Cross, United Nations and the Clinton Foundation used the disaster to make money for themselves through non-implementation of projects that global donations pouring in were precisely intended for.

She defrauded the people of Haiti. He spent 4 hours with Bill Richardson to tell Bill Clinton not to invade Haiti. A week later the embassy called him and told him that Bill Clinton has a messenger for him. He came and told him to sign with Bill Clinton, join his movement and Clinton will make him the richest man in Haiti.

He told him he is a principled man and he will not sell out. He just challenged Trump to ask Hillary Clinton to publish the audit of all the money they have stolen from Haiti in 2010. He is explaining it very detailed.”

The United Nations, for its part, “acknowledged, for the first time, the role peacekeepers played in the 2010 deadly cholera outbreak in Haiti that killed 10,000 people and sickened hundreds of thousands of others.
The Office of Secretary General Ban Ki-moon in an email this week said “the UN has become convinced that it needs to do much more regarding its own involvement in the initial outbreak and the suffering of those affected by cholera,” reported the New York Times.”
http://myeclinik.com/un-admits-role-in-haiti-cholera-outbreak-that-killed-10000-people/
The Red Cross Scam
The Red Cross is a disaster ‘racket’ in the business of making money from people’s misery, especially with totally engineered disasters such as 9/11.
So-called ‘charities’  are nothing more than a means of extracting even more money from the masses to swell the already overflowing coffers of the mega-rich.
The International Red Cross is an Elite-controlled front organization whose true purpose is the complete opposite from its stated purpose.
The moment a ‘natural’ disaster such as Hurricane Katrina, the Haitian earthquake or the Japanese Tsunami occurs; the Red Cross floods the airwaves with ads seeking donations.  With music full of pathos playing in the background, the announcer tells us that the Red Cross is ‘always there in time of need’ and now that the poor victims are suffering terribly, ‘won’t you please open your heart and wallet?’
These people have totally mastered the science of extracting money from the unthinking masses.   For example, the dust from the World Trade Center demolition had not even settled (literally) before the Red Cross were appealing to us all to give blood and money to help the families of the victims of the ‘terrorist’ attack.  Thousands of people gave blood and even more gave millions of dollars to the Red Cross. Perhaps, it would have been pertinent to ask ‘blood for whom’?  Everyone was dead (there were few injuries, relatively speaking) so why was the Red Cross asking for blood donations day and night for a week or longer?
The answer is reflective of the true purpose of the Red Cross.  Sad to say the Red Cross is a disaster ‘racket.’ which is in the business of making money from people’s misery, especially with totally engineered disasters such as 9/11.  They sell the blood on, of course, but they apparently also use the blood for other things to which the public is generally not privy and one could legitimately ask where does all the money go and to whom?
For the most part, they keep it for themselves as do the vast majority of major, household-name charities.  The families of the victims of 9/11 had to badger, harass and threaten the Red Cross in an attempt to obtain $11 million that they would not release to the families, as long as one year after the event – and that is just what we were told in the media, so my guess is that the actual figure was much, much higher than this.
The CEO of the Red Cross and other senior administrators receive obscene salaries and massive perks, all of which are paid directly from contributions.  At the time of writing, the salary of the current president is almost $700,000 per annum and the total revenue of the Red Cross is well in excess of $3bn!
Read more: https://eclinik.net/red-cross-scam/

6 thoughts on “How the Clinton Foundation, UN, NGOs Ripped off Haiti & Other HAARP Victims”