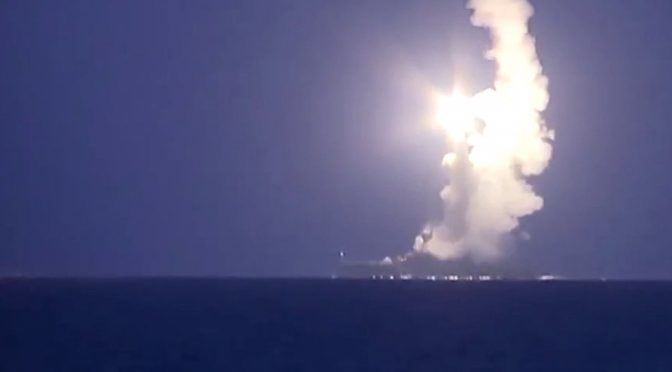 As the covert hybrid WW3 continues, Russian offensives can be felt both in the diplomatic fronts as well as in the battlefields of Syria.

Just as the Syrian ceasefire collapsed five days ago, Russia moved its primary aircraft carrier to augment the naval forces already in the area. Identified targets in Western Aleppo were then fired upon with Kaliber missiles resulting in the deaths of 30 Mossad/CIA/Qatari intelligence officers managing and supporting the Daesh Aleppo aid convoy attacks which caused the collapse of the ceasefire.

Wed Sep 21, 2016 12:12
TEHRAN (FNA)- The Russian warships stationed in Syria’s coastal waters targeted and destroyed a foreign military operations room, killing over two dozen Israeli and western intelligence officers.
“The Russian warships fired three Caliber missiles at the foreign officers’ coordination operations room in the Dar Ezza region in the Western part of Aleppo, near Sam’an mountain, killing 30 Israeli and western officers,” the Arabic-language service of Russia’s Sputnik news agency quoted battlefield source in Aleppo as saying on Wednesday.
The operations room was located in the Western part of the Aleppo province in the middle of the sky-high Sam’an mountain and old caves. The region is deep in a chain of mountains.
Several US, Turkish, Saudi, Qatari and British officers were also killed along with the Israeli officers. The foreign officers who were killed in the Aleppo operations room were directing the terrorist attacks in Aleppo and Idlib.
Earlier in September, the Syrian army units launched a preemptive strike on the terrorists of the so-called Aleppo Operations Room in their gathering centers near the Castello road in the Northern areas of Aleppo and Mallah farms, foiling their plots to attack the region’s supply route, a source said.
The source said that the army’s artillery units attacked the terrorists’ gathering centers near Castello and Mallah farms in Zahra Abdo Rabbah, Kafar Hamra and Hurayatyn which killed and wounded dozens of militants.
Also, the Syrian air force attacked the terrorists’ supply route in Northern Aleppo towards Hayyan and Adnan as well as the supply roads in Western Aleppo towards the North and smashed the terrorists’ convoys in al-Aratab, Urom Kobra and Ma’ara al-article which thwarted the terrorist plots and forced many of them flee towards the Turkish borders.
Informed media sources disclosed earlier that the Syrian army has continued its advances in the Southern part of Aleppo, and regained control over several strategic areas in the town of Khan Touman.
“A number of key warehouses of Khan Touman are now under the Syrian army’s control,” the Arabic-language media quoted an unnamed informed source as saying.
The source noted that the Syrian air force and army artillery units also targeted the gathering centers and fortifications of the terrorists in Khan Touman.

More CIA terrorist groups operating inside Syria are now in Russian crosshairs.
Defeat is imminent for a mysterious group in Syria

All signs indicate that the Syrian army will begin the process of liberalization of Mards City at the earliest. This city is located on the road linking Damascus, Aleppo. And now controlled by the “Jund al-Aqsa” group, a unique group of its kind, is until recently has large numbers of drones and succeeded in courting the United States of America.
It is believed that the defeat will allow to know many new things about the war in Syria. It is noteworthy that this group used large numbers of drones to bomb sites on earth. But no one knows where is this isolated base where basic supply, and aircrafts capable of launching bombing operations in addition to doing the task of surveillance, are channeled from.
Where “Jund al-Aqsa” group got on airplanes? And where the group’s leaders come from? … It is possible to find the answer to solve these puzzles when a covert group of Syrian forces had seized documents.

Russian aircraft carrier Admiral Kuznetsov will be heading to the Mediterranean Sea in order to support the ongoing anti-Daesh military operation in Syria while carrying a full complement of weaponry and military aircraft.
… While en route to the Syrian coast, the group, which will also include a nuclear submarine, is expected to hold a military exercise involving Tu-160 long-range strategic bomber aircraft.
“The entire spectrum of aircraft and helicopters stipulated by the minister’s decision will be deployed on it (the carrier),” Maj. General Igor Kozhin, chief of the Russian Naval Aviation, said.
Russian aircraft carrier Admiral Kuznetsov, officially designated by the Russian Navy as a heavy aircraft-carrying missile cruiser, was built at the Black Sea Shipyard in 1985.
The vessel carries a complement of Su-33 air superiority fighters and Ka-27 and Ka-27S anti-submarine warfare helicopters.
In 2016 however the carrier received a number of upgrades and can now also carry Ka-52K reconnaissance and combat helicopters that were originally designed for operations aboard the French-built Mistral-class amphibious assault ships.
The ship’s armaments also include 12 Granit anti-ship cruise missile launchers, Kortik and Kinzhal air defense systems and depth charge launchers.

It is for these reasons that most geopolitical analysts are in agreement that we are so close to a nuclear war as ever. But this scenario will never be allowed by level headed segments from both sides of the conflict.
What they have done and continue to do instead is to inform the other side where these rogue intelligence operatives are holding up to coordinate their nefarious sabotage operations, and eliminate them quickly.
These covert military operations are being launched in tandem with diplomatic offensives at the UN and in various established fora.
https://www.youtube.com/watch?v=71MHqNcq8tQ
It should be very clear by now that a sizable opposition have been fighting against the Khazarian Imperialists, and the only component that’s missing is the informed participation of the population which directly address the abuses of their own fascistic governments.
Street protests are good for exercising limbs and vocal chords. But, it is long overtime for the people of America and Europe to rise to the occasion, and remove those high profile parasites from all positions of power.
If we can do it here in the Philippines, you too can remove those dominant political parties, and install one of your own in positions of governance.
The decision and action still need to come from you.