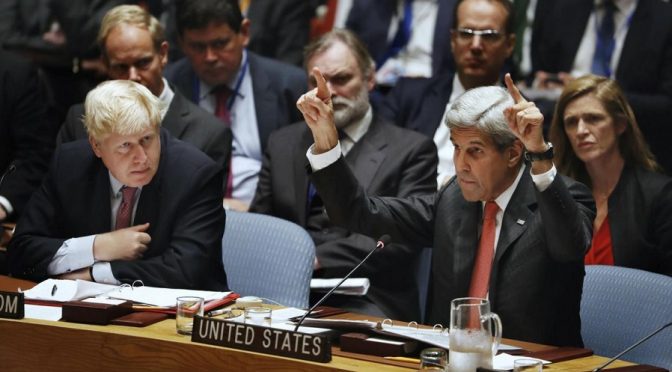 Remember NATO’s no-fly zone imposition over Libya in the last days of Muammar Gadhafi?
The United States is asking the same favor from the UN Security Council, which would give it the upper hand in its 6th-year war against President Assad.

Even if Russia intentionally leaked what they did to 30 CIA and Mossad operatives in the area of Aleppo few days ago [here], the US government still has the gall to openly bargain for a “no-fly zone” over the entire Syrian airspace as a prerequisite to the resumption of the Syrian ceasefire that they themselves sabotaged a few days ago.
What’s even more laughable is that the combined position of the US State Department, and the Pentagon requires that only the Russian and Syrian air assets are prohibited to do so, and not US aircrafts.
Here’s a very good 5-minute summary of what transpired at the UN and more…
https://www.youtube.com/watch?v=0IDEPcKcujI
Of course, this US hardline position is only meant to prolong the agony of Syrians still trapped in Aleppo and Raqqa, as the Syrian adventure is the only remaining war, they still believe they have a chance of succeeding because of the human shield protecting their terrorist assets.
It used to be that condemnations against the United States are only done in whispers in diplomatic gatherings, or edited by the mainstream media, and those who tried to break that unwritten protocol are either shun, ignored, or avoided. But not this time.
Venezuela brands US ‘biggest violence exporter in the world’
Latin American nations accused the US of “neo-colonialism” at the UN General Assembly, with Venezuela going as far as calling Washington “the biggest exporter of violence in the world,” while also arguing for the removal of stumbling blocks to development.
Ecuador and Nicaragua joined Venezuela in their condemnation of the US at the 71st UN General Assembly in New York.
The mood was largely centered on the economic exploitation of countries in the south by the developed north. The United States, with its history of fomenting unrest and regime change in Latin America – took center stage.
Venezuelan Foreign Minister Delcy Rodriguez in particular said capitalism is the main “producer of violence and unhappiness” as she spoke in support of rebalancing global power dynamics through the BRICS.
https://www.rt.com/news/360500-venezuela-exporter-violence-us/
It boggles the mind how the Americans have allowed their government to behave in such a despicable manner around the world, for such a very long time now. And the way things are going today, it seems that the US government will still be navigated on the same trajectory as they are still pinning their hopes for real change on a grossly rigged election.
Of course, that is your domestic affairs, but the rest of the world is still suffering because of your own inaction.
That’s why, we can only condemn, in the strongest displeasure as possible, all that’s been done to us in the last 117 years of being a loyal friend to Uncle Sam, and all the pain inflicted upon our brothers in the Middle East, and elsewhere there’s suffering today.
https://youtu.be/YrgnFGVttho?t=27m11s
From hereon, no longer will the Philippines look up to America as its worthy ally. In fact, President Duterte will be visiting China and Japan by next month where new infrastructure projects, and other mutually progressive bilateral agreements, will be signed.
This is a huge departure of the country from the grossly one-sided affair which only encourages export of caregivers, nurses and decades of brain drain which effectively arrested its march towards full industrialization after the CIA facilitated the removal of strongman Ferdinand Marcos in 1986 that resulted to the immediate mothballing of our first nuclear plant.
So, once again…
https://youtu.be/78KHRzelKjA?t=47m1s

4 thoughts on “Pathetic US Gov’t Wants “We fly, you don’t…” No Fly Zone in Syria”