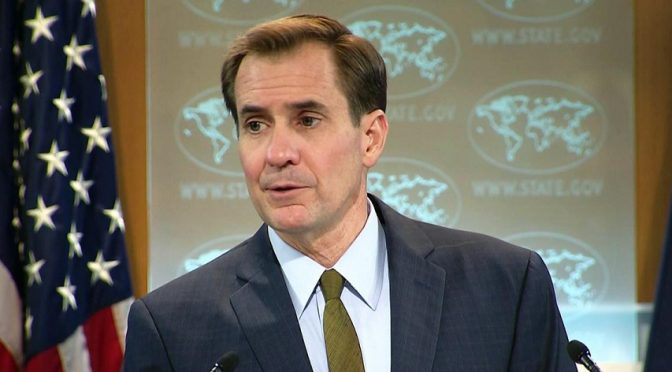 In a veiled threat against the Russians, US State Department spokesman John Kirby warns Russia of ‘more body bags” and “attacks on Russian cities” if the Russians will not cooperate with them in Syria.

TEHRAN (FNA)- The US-led coalition warplanes launched airstrikes on two main bridges on the Euphrates River in Deir Ezzur province, days after they killed at least 90 Syrian soldiers in an air assault in the same region in Southeastern Syria.
The state news agency’s reporter in Deir Ezzur said Wednesday that the air raids destroyed al-Asharah Bridge that links the river’s two banks in the Eastern part of the province in Southeastern Syria, only few hours after demolishing al-Mayadin Bridge in the same region near the border with Iraq.
The reporter added that the destruction of the two bridges has been aimed at disconnecting the regions on the two eastern and western banks of the river.
The US-led coalition warplanes targeted the Syrian army troops near the city of Deir Ezzur on September 17, leaving over 90 military personnel dead and a hundred wounded.
Russia’s Defense Ministry confirmed a report by the Syrian state news agency that an ISIL offensive began right after Syrian Army positions were hit by the bombers of the US-led coalition.
The actions of the coalition “clearly paved the way for ISIL terrorists to attack the position and take control of it,” the agency said citing the General Command of the Army and Armed Forces.
The General Command called the bombing a “serious and blatant aggression” against Syrian forces, and said it was “conclusive evidence” that the US and its allies support ISIL terrorist group.
A day later, a military source disclosed that the ISIL launched attacks on the Syrian army positions in Deir Ezzur only 7 minutes after the US-led coalition’s airstrikes.
The military source reiterated that the air and ground assault were highly coordinated.
A Syrian top official said the country’s intelligence unit possesses an audio recording of a conversation between the ISIL group and the US military before the airstrikes by the US-led coalition on the Syrian army troops near Deir Ezzur on September 17.
The speaker of the People’s Council of Syria, Hadiya Khalaf Abbas, said on Tuesday that after the US coalition’s airstrikes on the government troops, US military directed terrorists’ attack on the Syrian army.
http://en.farsnews.com/newstext.aspx?nn=13950707001476
It is with great displeasure that we warn everyone of a much bigger false flag operation within the United States soon, as the Khazarian psychopaths continue to fight against their own shadow.